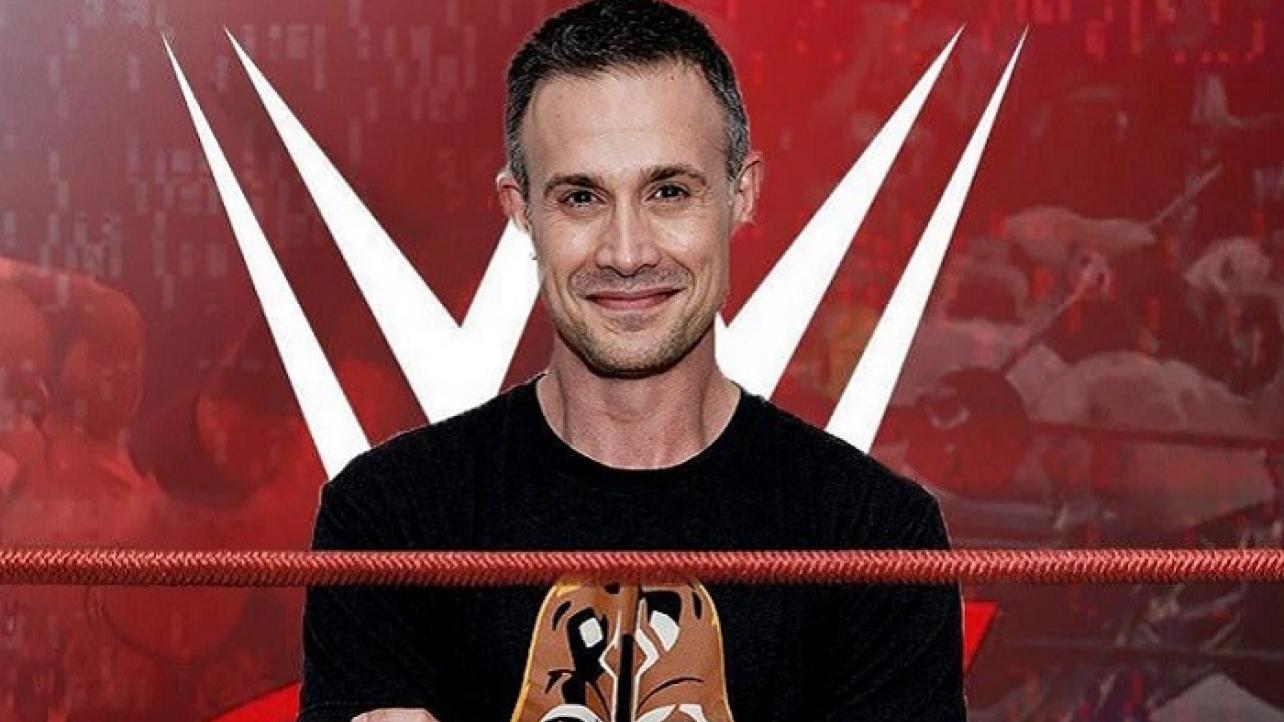 Freddie Prinze Jr. Explains How He Got Writing Job In WWE, Dealing With Vince McMahon & More

In one of the initial episodes of his new show, the former WWE writer spoke about how he got his job on the creative team in 2008, working with Vince McMahon behind-the-scenes, meeting Michael Hayes and more.

On how he got his job in WWE on the creative team in 2008: “It was Orlando, FL and it was Ric Flair’s retirement match. He was wrestling against Shawn Michaels. We went out there early. It was me and Macaulay Culkin. We were sharing a hotel room, and our hotel room was right next door to Snoop Dogg’s, and they brought like a garbage bag of marijuana in there by the way. I’m not exaggerating. Saturday was the Hall of Fame speech. This was when everyone hated John Cena. They booed him when was trying to give this speech about somebody who was going into the Hall of Fame. It was a poor showing on the fan’s part, but they were mad. John Cena represented a different kind of WWE than what they were wanting at that time but he had to because the company was PG.

We went to that. We met a bunch of the wrestlers, and I met this lady who helped do the invites and she tries to book celebrities and things like that for WWE events. We chatted up at like the Hall of Fame party or whatever it was, and then everybody went home and went to bed. The next day is WrestleMania. We’re there and we’re watching the final match. I’m talking to this nice lady, and I don’t know if she wants me to say her name, so I’m just going to keep it out. She said, ‘You should talk to Stephanie McMahon. You got some really cool ideas about wrestling’ because we had talked about like the old school versus the new school and where the happy medium is. Is there a happy medium and that kind of stuff? I was kind of done acting. I’m staying in New York with my wife and I had an apartment out there. I said okay, ‘I’ll take the train out there and I’ll come and meet Stephanie McMahon.

I was kind of disenfranchised with my business if that’s the right word, but you know what I mean. I was wanting to retire all the way. If at the very least, I had a foot and a half out. So I go and I sit with Stephanie. We start talking wrestling, and characters, and characters who maybe seen stale or couldn’t get over. They would challenge you with, ‘Well, how would you get this character over’ and and really just on the spot kind of thinking. So you have to be quick and fast. My improv skills are good. So, I’m in there with Steph and we start talking about acting workshops and things like that, and techniques and stuff to make people feel things, little cheats you can do here and there. Our meeting is not over and she says, ‘You have to talk to my dad. You have notes on the brand but you’re not crapping all over it, and you come to the table with ideas not just ‘Oh, that sucks’, ‘Well what would you do?’ “Well I don’t know but it sucks.’ I would have three or four ideas for everything so she would say, ‘Hey what would you do with Kane?’ and I would say, ‘Well how about this, or how about that?’ and just try to build it up. This all happens in a day. I shake hands with Steph. I hadn’t met anybody else.”

On going to Vince McMahon’s office to have a meeting with the boss to discuss a wide range of things: “I go into Vince McMahon’s office. I have a very similar conversation that I had with Steph. We’re talking about the characters and the reason two people will fight right, that’s the story. So he hits you with ‘Wrestler X is John Cena. Wrestler Y is Randy Orton. I want them to wrestle at WrestleMania. Get me there in a way that we haven’t got there before.’ So we would start talking about stories.’

Not growing up with a father, I’m a sucker for him, I want to please my boss. I want to please people that I looked up to when I was younger. It’s just something anyone without a father or mother can relate to, so I’m sitting in there and he calls me son. He says ‘Well, I think we could really use you son’, and he puts out his hand and I’m like, in my head I’m like, wait, hold up I didn’t even see a contract and this guy is putting out the let’s make a deal hand. But because he said son, that’s kryptonite. And he did it to me twice. He got me to come back with the same technique. I shake the man’s hand. I hadn’t even spoken to my wife yet. She was in L.A. He said, ‘Ok, we’ll send whatever we need to your people and you will start next week.’”

On his contract with the company that included his salary, stock options and more: “They sent me a contract. I don’t want to throw out exact numbers because I don’t know if their business is public or not, so we’ll say it is $250,000 to write for them per year. It was a number that they weren’t going to budge from. I said, you guys can keep all that money and just give me stock. I’ll take stock in the company and bet on myself. Against my manager’s advice, that’s what I did. I signed the contract and the deal was for me to travel to every single Monday Night Raw and every single shot on Tuesday but airing on Thursday I believe was the date of SmackDown back then. So we would shoot Raw and SmackDown. I would be all of those tapings and I would be in the office every single week. That was the job.”

On a story about meeting Michael Hayes: “I’ll finish with this story because it’s awkward, horrible and really funny. I get to Titan Towers. I’m super excited and I meet my Superior, Michael PS Hayes. Michael, who’s seen it all, now has to deal with this Hollywood guy coming into his writer’s room, and he’s supposed to teach me the wrestling business, and I’m supposed to write better scripts. Nobody’s been told anything about the other person. I got in there. I have my meeting with him and he’s awesome. He couldn’t have been cooler to me. He had just been in some trouble with the company, I was told, so he was kind of humbled, and maybe that’s why he was nice, but Michael and I by the time I left were really really tight. He kind of breaks it down for me. He said, ‘Here’s how many wrestlers you have on the TV roster that are going to be working and you have to give me four weeks of stories for all of them. Most of the time it’s not going to go through because there’s not going to be enough time in the show, but that’s your job no matter what. “I said cool. If that’s my job, that’s my job.’ While I’m having a meeting with him, they knock on his door and they say ‘Vince wants to see Freddie in his office’ and Michael is like’ You need to go.’ I go to Vince’s office and there’s this other dude sitting in there named Brian and I sit on the other side. Vince shows me the Monday Night Raw script and he says ‘Brian, this is Freddie. Freddie, Brian.’ I’m like, ‘Nice to meet you.’ Brian’s looking at me all side eyed at me. He’s like, Who is this guy? Vince shows me the script and says,’ Brian, Freddie is here to help out with all the scripts and the dialogue. I’m going to have to send you back to the drawing board on this one.’ He hadn’t even read it yet. Brian visibly and audibly snaps a number two pencil in half upon hearing this. He snapped a lot of pencils. He goes out, makes a big sigh, and grabs the script. Vince looks at me and kind of smiles, like this is a test. He’s going to pit me against these guys and see if I can freaking take it. This is who this guy is. I don’t mind the challenge so I walk out. Brian is not waiting for me by the way. He’s already halfway down the hall. I catch up to him and I say ‘Hey man, that’s a terrible way to meet. I’m so sorry. I’m not here to rewrite your stuff. He said, ‘This is because of you man’, just straight-up all the cards on the table right away and I’m like, this guy hates me. He did, but by the time I left, Brian and I were really tight too. We’re not like friends. We don’t send each other Christmas cards or anything like that, but if we ever randomly see each other or randomly like are on the same chain on the social media thing, it’s always all love, and I always check in on him. He’s a good dude. So I’m sitting there like they just threw me in the fire on day one. So I go back into the writers room and Freebird goes, “So how was your meeting?’, and he has this big grin because he knows, like this is a routine for Vince. I wasn’t the first Hollywood writer they had there. They brought writers from USA TV shows in there all the time. I said, ‘Yeah, everything is fine.’ He said, ‘So are you ready to work on some storylines that are going to get cut every week or not?’ I sat there. I sat down. I opened my computer and I just started writing.’”

Check out the complete episode of the show at CHTBL.com. H/T to WrestlingNews.co for transcribing the above quotes.

Freddie Prinze Jr. Explains How He Got Writing Job In WWE, Dealing With Vince McMahon & More