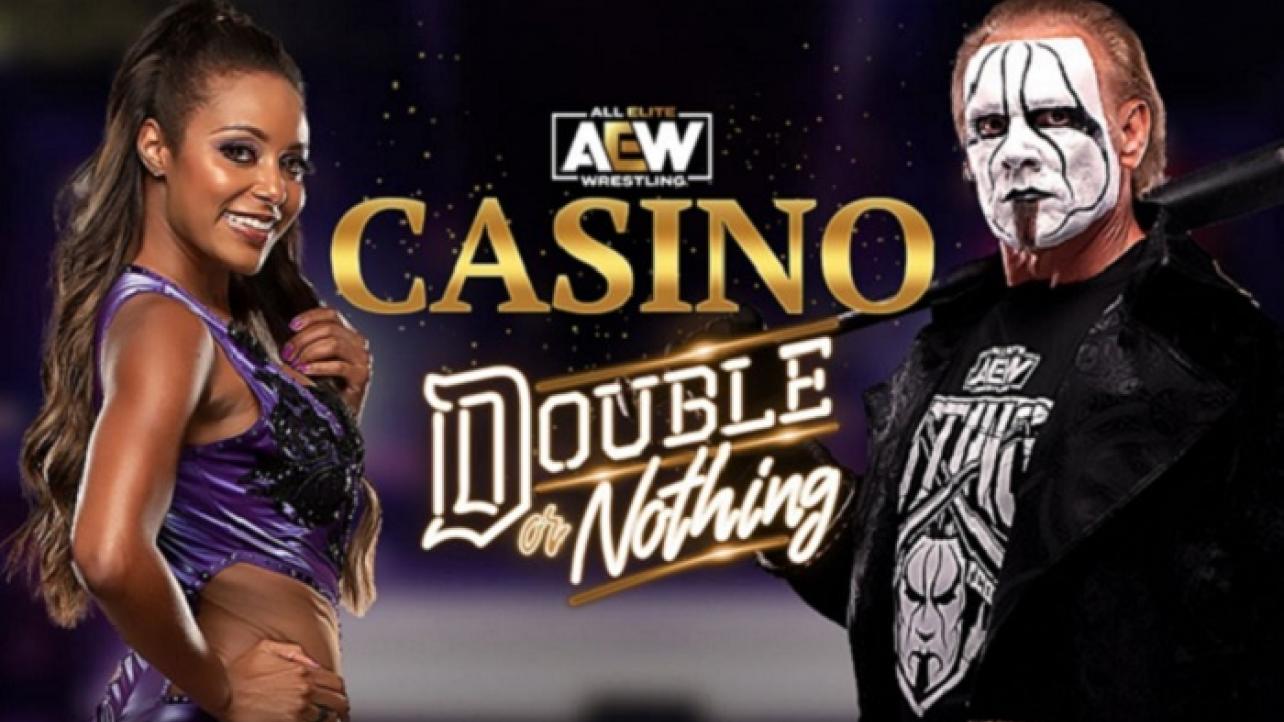 All Elite Wrestling has announced the launch of a brand new mobile game.

On Monday morning, AEW issued the following press release, which includes all of the details regarding their new AEW Casino: Double Or Nothing mobile game.

“AEW Casino: Double or Nothing” Game Launches for Free on Mobile App Stores

March 1, 2021 – AEW GAMES follows up its explosive debut with the launch of AEW Casino: Double or Nothing, the highly anticipated mobile game that is now available for free on Google Play and Apple App stores.

AEW Casino: Double or Nothing, made in partnership with social casino developer KamaGames, is the first of three gaming titles under the AEW GAMES brand. AEW first announced its plans to reimagine the gaming world during a star-studded virtual event in November 2020 featuring Kenny Omega, Cody Rhodes, Dr. Britt Baker and Ref Aubrey Edwards.

KamaGames is one of the largest European social casino app developers with a reputation for building casino-style games that lead in their respective categories. Thanks to KamaGames’ long standing expertise, AEW Casino: Double or Nothing can offer players an authentic Las Vegas casino experience with games such as blackjack, slots, roulette, Texas Hold’em and others.

With 10 different games to choose from, babyfaces and heels alike can level up friendships and sharpen skills while also competing in weekly tournaments to win trophies, chips and leaderboard dominance. AEW Casino: Double or Nothing also includes an in-game IM to chat with other players as well as an option to challenge the casino directly in different series of tournaments in Poker and Blackjack with up to 1,000 people at once. Gaming rookies can also quickly learn the ropes with a step-by-step tutorial that covers the basics of each game in addition to insights for attaining winning combinations.

In the coming months, new elements and events will be incorporated to provide fans with additional ways to interact with the game. Future enhancements to AEW Casino: Double or Nothing will include custom games based on player feedback, more AEW wrestlers, and mind blowing AEW themed prizes. Similar to the approach of other upcoming titles in the AEW GAMES lineup, the players themselves will help shape and customize future versions of this game.

“Working closely with KamaGames, it’s easy to see why they’re a leader in the global social casino space with more than 150 million players,” said Kenny Omega, EVP of AEW. “In launching AEW GAMES, our mission is to deliver a vastly superior gaming experience for wrestling fans, starting with two mobile games and a revolutionary console game. We think that AEW Casino: Double or Nothing is poised to become the best wrestling-themed mobile casino offering in the world.”

“This app launch is the latest example of a strategic partnership which sees KamaGames link up and share our expertise with a global brand,” said Andrey Kuznetsov, CEO of KamaGames. “There is a recognized crossover between casino gamers and sports enthusiasts, and we’re confident that we’ve effectively targeted this market. It was a pleasure to work with a team of AEW’s passion and drive, and I’m confident that together we’ve created a product that will not only engage their current audience, but assist in growing it further.”

“We know that sports and gaming have always been one of the most popular entertainments among our users, and AEW combines all of these elements, thus the fans of this sport are ideal for a joint product,” added Kuznetsov. “We are honored to work with AEW and truly believe that wrestling fans will love our games.”

To download AEW Casino: Double or Nothing for free, visit aewgames.com/playaewcasino on your mobile device today.

Watch the special trailer for AEW Casino: Double or Nothing here.

About AEW
Founded by CEO, GM and Head of Creative Tony Khan, AEW is a new professional wrestling league headlined by Cody & Brandi Rhodes, Kenny Omega, The Young Bucks (Matt & Nick Jackson), Chris Jericho, Sting, Hangman Page and Jon Moxley. For the first time in many years, AEW is offering an alternative to mainstream wrestling, with a roster of world-class talent that is injecting new spirit, freshness and energy into the industry. The inaugural event under the AEW banner was the sold-out DOUBLE OR NOTHING PPV in Las Vegas in May 2019. AEW began airing its weekly show on TNT on Wednesday, Oct. 2, 2019, from 8-10 p.m. ET. The show, “AEW DYNAMITE,” is Wednesday’s No. 1 wrestling show and attracts the youngest wrestling audience on television. AEW’s multi-platform content also includes “AEW DARK,” a weekly pro-wrestling YouTube series, “Being the Elite” a weekly behind-the-scenes YouTube series, and “AEW Unrestricted,” a weekly podcast series. For more info, check out @AEW (Twitter), @AllEliteWrestling (Instagram), / AllEliteWrestling (FB), AllEliteWrestling (YouTube).

About KamaGames
Established in 2010, KamaGames is the largest European social mobile poker operator. Employing over 250 staff, KamaGames has its corporate headquarters in Dublin, Ireland. KamaGames’ flagship title Pokerist has been localized into 29 languages, was the #1 grossing app in 101 countries on the App Store and one of the top 5 grossing apps in 45 countries on Google Play.