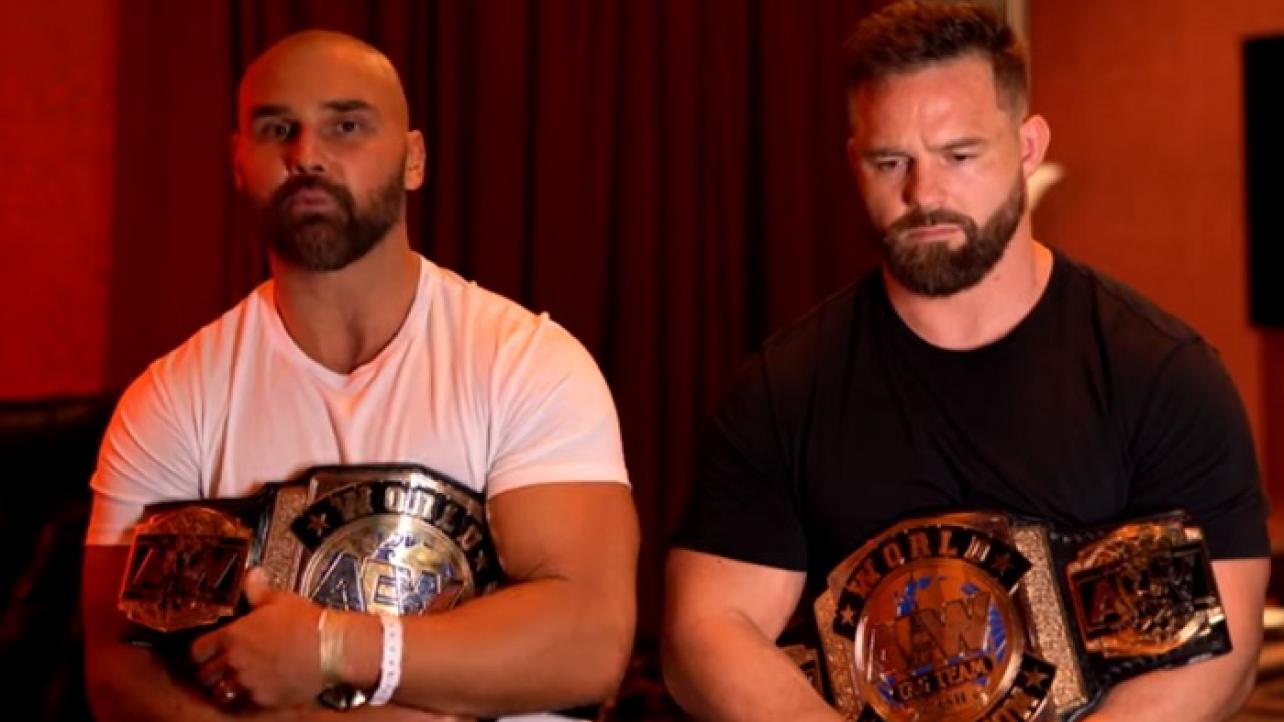 FTR recently spoke with Mike Beauvis of TSN for an in-depth interview covering their careers in WWE and AEW.

During the discussion with the Canadian media outlet, the team of Cash Wheeler and Dax Harwoood spoke about the recent mass WWE talent cuts, their decision to jump from WWE to AEW and more.

Dax Harwood on fans who are upset about AEW bringing in ex-WWE wrestlers: “There are a lot of fans — and it boggles my mind — who are upset by this. They’re upset by seeing a lot of former WWE talent [in AEW]. They’ve got to understand AEW cannot just hire independent wrestlers because if they only hire independent wrestlers for a television product, it’s almost like the blind leading the blind. You have to have people who are experienced in television wrestling because it’s a completely different beast from just professional wrestling..”

Cash Wheeler on people’s AEW signs, and fans calling them “ex-WWE” talents: “The people we’ve signed, they’re all signed for a reason – because they’re so good at what they do and they’re going to help everybody else in the process. So, the company gets better by signing these people. And I hate when people call them ‘ex-WWE this’ or ‘ex-WWE that’ because yeah, we’ve worked there. We’ve all worked there at some point, but that doesn’t make us their property or like we didn’t learn these things sometime before that, also. We’ve all learned these things from decades of hard work, decades of putting in the grind and going all over to get good enough to where we can get jobs with the best wrestling companies in the world and it just so happens that now there’s another huge, great wrestling company and that hasn’t been around for 20-plus years. So now there are options and there are going to be people coming over and that’s just how it’s going to be, but that doesn’t mean the company is going to be the next whatever. They’re killing it right now. They’re signing the people that need to be signed and wrestling is better because of it.”

Harwood on FTR knowing they made the right call joining AEW: “We knew we made the right call before we even signed the contract. We had been trying to leave that place for a year and a half. That’s not anything against them. We knew what our potential was, and our potential wasn’t being met there. And that does sound egotistical, but oh, well. We knew our potential wasn’t being met there and outside of WWE was where we could actually break through the glass ceiling and become the greatest tag team ever. We could have stayed there and made a ton of money, but that wasn’t our goal. Our goal was to become the greatest tag team in the history of professional wrestling.”

Wheeler on the wrestlers WWE released due to “budget cuts”: “It’s hard to see the positives in a moment like this, but some of the people, I’m sure, are actually pretty relieved because I know they were ready. But some of these people were blindsided by it. Regardless of it, you’re going to be great. You’re going to do great. There’s so many options out there right now, so many opportunities and now it’s an adjustment because you don’t understand how much [freedom] you have in your own life right now. You don’t understand that you don’t have to get permission to do a certain thing, or you don’t have to wait for this or that. You can decide in that moment, yes or no, and you can take whatever opportunities you want. You can reach out and really discover what makes you happy and what doesn’t.”