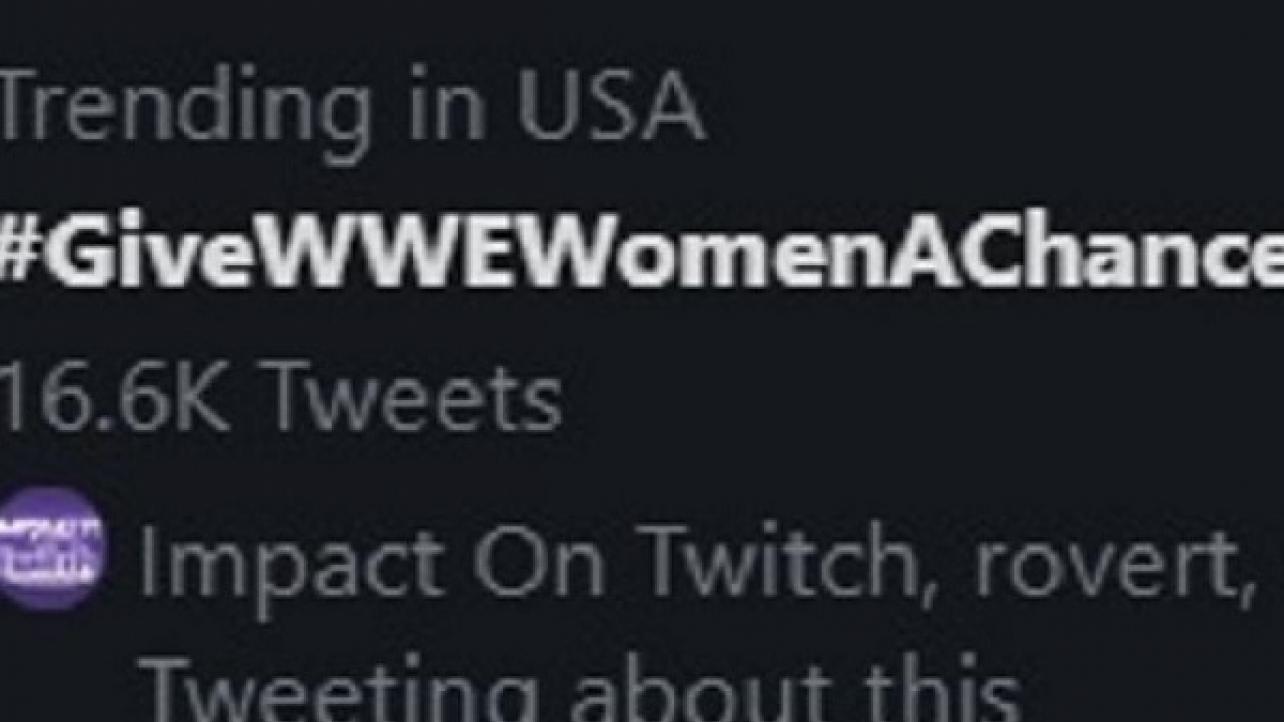 “#GiveWWEWomenAChance” Trends No. 1 On Twitter After Women Snubbed At RAW Reunion

Another Twitter movement in support of the women talent on the WWE roster has started up again following Monday night’s WWE RAW Reunion special.

The show obviously featured women, but apparently the WWE Universe noticed how little importance seemed to be placed around the female performers on the heavily-advertised event.

Monday’s special edition of WWE RAW at Amalie Arena in Tampa, Florida featured such women-focused segments on the three-hour-long broadcast as the “Moment Of Bliss” with Alexa Bliss and Nikki Cross featuring special guests Becky Lynch and Natalya, as well as the quick backstage skit that saw Kelly Kelly pinning Gerald Briscoe to briefly hold the WWE 24/7 Championship.

Aside from that, the general consensus from the WWE Universe is such that WWE “snubbed” their female performers on the high-profile show.

The Twitter movement includes the hash-tag “#GiveWWEWomenAChance,” which is very similar to the “#GiveDivasAChance” Twitter campaign that ultimately garnered a response from WWE Chairman Vince McMahon himself, and essentially launched the “Women’s Revolution” in WWE that culminated with the first-ever women’s main event at WrestleMania 34 earlier this year.

Check out just a brief sample below of the “#GiveWWEWomenAChance” Twitter movement that started after WWE RAW Reunion last night and was actually briefly trending number one in the United States at one point with well-over 17,000 tweets posted that includes the hashtag.

We will keep you posted as more news regarding the “#GiveWWEWomenAChance” movement continues to surface.

I’m really glad #GiveWWEWomenAChance is trending right now. We had an amazing thing going especially in 2018 and early 2019. Hell… Women main evented WrestleMania for the first time ever this year! Now they are being ignored and neglected just like they were before.

I can’t believe we are doing this again!
LISTEN TO US WWE #GiveWWEWomenAChance pic.twitter.com/YEXXS1TdAf

WE DID IT #GiveWWEWomenAChance is trending No.1 don’t stop tweeting until WWE WOMEN have seen it pic.twitter.com/SvA80hNbdx

“#GiveWWEWomenAChance” Trends No. 1 On Twitter After Women Snubbed At RAW Reunion