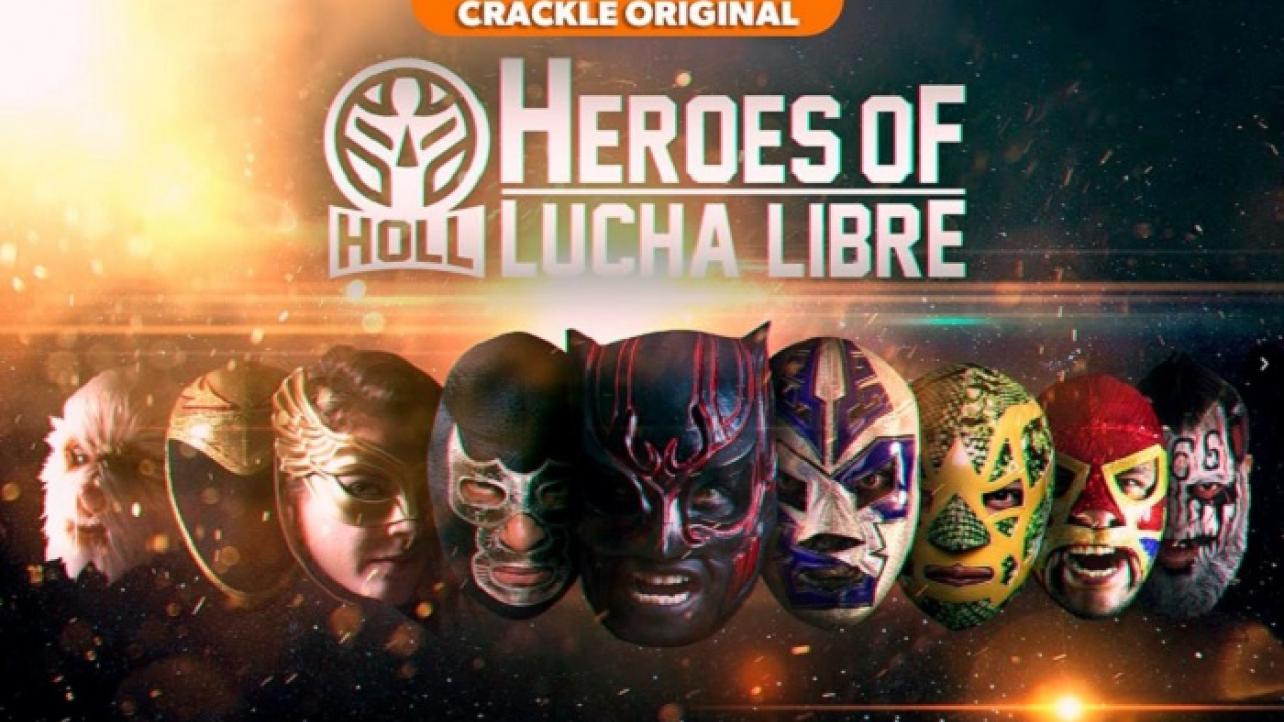 The free streaming app Crackle issued the following press release announcing details for the new “Heroes of Lucha Libre” program. The 11-part series begins airing on November 25th, and covers some of the most popular luchadores in the business, including LA Park, RUSH, and more. Check out the details below.

Heroes of Lucha Libre celebrates and honors the rich cultural tradition of the Lucha Libre sport while integrating an imaginative comic book storyline. With a contemporary spin on the action in the ring, the series features superhero elements making it unique to other content of its genre. Produced and created by Joaquin Vodanovich alongside Alejandro Ortiz the series is written by Ortiz.

“I grew up watching these heroes with my grandfather in Mexico. Now I want to share all those emotions and admiration with the world and help to inspire future generations,” said producer Alejandro Ortiz. “Lucha Libre tradition has been in our culture for over 100 years and we want to honor that heritage in the way it deserves. We think Crackle is the best partner to do just that,” said producer Joaquin Vodanovich.

The deal was negotiated by Patrick Hughes, Harvey Russell and Pablito Vasquez of Foundation Media, who are also executive producers on the project.

As one of the only AVODs continually adding original and exclusive programming that uplifts, entertains, and inspires audiences, Crackle adds Heroes of Lucha Libre alongside original and AVOD exclusive titles including Lennox Lewis: The Untold Story, Robert the Bruce, Corporate Animals, Blue Iguana, Spides, Road to Race Day, Cleanin’ Up the Town: Remembering Ghostbusters, On Point, Anything is Possible – The Serge Ibaka Story, The Clearing, and Going From Broke, which was recently picked up for a second season.

“We are proud to add Heroes of Lucha Libre to Crackle’s growing list of original series,” said Philippe Guelton, president of Crackle Plus. “This family friendly show spotlights the exciting and historic cultural traditions for the sport and its famous Luchadors.”

Heroes of Lucha Libre is distributed worldwide by Screen Media, a Chicken Soup for the Soul Entertainment company and the supplier of exclusive and original content for Crackle Plus.

Crackle linear and VOD networks are available in the U.S. and can be accessed on up to 27 devices and services by the end of the year including Amazon FireTV, RokuTV, Apple TV, Smart TVs (Samsung, LG, Vizio), gaming consoles (PS4 and XBoxOne), Plex, iOS and Android mobile devices and on desktops at Crackle.com. Crackle is also available in approximately 500,000 hotel rooms in the Marriott Bonvoy chain.