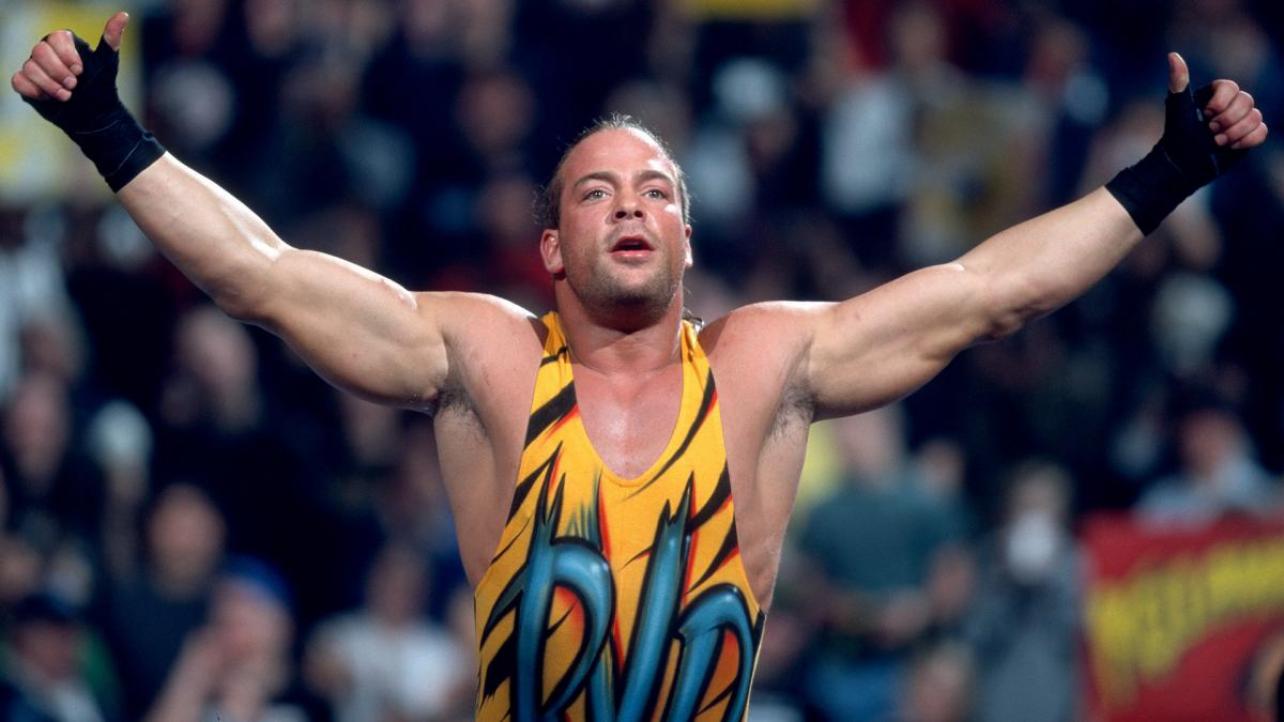 How It Started vs How It Ended: Rob Van Dam

Hello again wrestling fans, and welcome back to How It Started vs How It Ended. Today’s edition of the column will cover the WWE career of “The Whole F’N Show” Rob Van Dam. Throughout the story here you’ll see how Van Dom rose to the top of the card, the moment he made it there, and the after affects of a decision he made once he got there. Without any more delay, here is HIS vs HIE!

Rob Van Dam began his first full-time tenure with WWE during the 2001 WCW/ECW invasion storyline. Van Dam made an impact right away, and attacked Chris Jericho, as well as Kane, during their match against Lance Storm and Mike Awesome. Just two weeks later, “Mr. Monday Night” took on Jeff Hardy for the Hardcore Championship, and won his first title in WWE, at the 2001 Invasion Pay Per View. Van Dam would drop the title back to Jeff Hardy 22 days later, setting up a third match between the two at Summerslam. Van Dam and Hardy competed in a brutal ladder match at the event, where Van Dam climbed the ladder, and sealed the deal on his second Hardcore Championship reign. RVD held the title for another 22 day reign, until the September 10th episode of Raw. During the episode, RVD defended his Championship against Kurt Angle, who forced Van Dam to tap to the ankle lock. As soon as the match ended, Angle received an attack from the hands of Stone Cold Steve Austin. Austin tossed Angle off of the stage, and after a brief embrace with Van Dam, he threw RVD off of the stage too. This allowed Van Dam to crawl over to pin Angle, and immediately regain the Hardcore Championship. Moving on to his third reign with the title, Van Dam took things to another level in the ring. “Mr. Monday Night” started off by defeating Chris Jericho at the Unforgiven Pay Per View. Van Dam followed up by challenging The Rock for the WCW Championship, in a losing effort on Raw. RVD would then successfully defend his title in matches against The Big Show, Booker T, The Undertaker, D-Von Dudley, and Christian. Van Dam faced off with The Undertaker once again at Vengeance, with the Hardcore Championship on the line. In the closing moments of the match, RVD misfired on a Van Daminator. The Undertaker caught Van Dam with a choke slam off of the stage, and into the tables below. Van Dam took the pin after the fall, and briefly moved out of the Hardcore division. Van Dam won his first Intercontinental Championship during his time away, before facing Hardcore Champion Tommy Dreamer, in a title unification match. RVD defeated Dreamer, and became the final Hardcore Champion in WWE history. The moment cemented RVD’s hot start to his WWE career, which had only just begun.

Can You Take Me Higher

After winning the Intercontinetal Championship for the first time, and becoming the final Hardcore Champion, Van Dam’s WWE career continued to flourish. RVD successfully defended his Intercontinetal Championship against Booker T, and Eddie Guerrero, before starting a mini-feud with “Latino Heat”. Van Dam and Guerrero faced off at Backlash 2001, where Rob dropped the title to Eddie, after an incredible match. Eddie and Van Dam would meet up again at the next months Insurrextion Pay Per View, with the Intercontinetal Championship on the line once again. In the closing moments of the match, Guerrero attempted to use the title to cheat, but accidentally hit the referee. The collision caused Van Dam to win the match, but Guerrero retained the title. Fast forward to the May 27th, 2002 edition of Raw, where Van Dam and Guerrero met once again, this time in a ladder match. “Mr. Monday Night” climbed the ladder, and regained the Intercontinetal Championship once again. In the midst of his second reign with the title, Van Dam competed in yet another title unification bout, this time for the European Championship. Rob faced off with Jeff Hardy in a ladder match, and wouldn’t you know it, he climbed the ladder to success once again. Van Dam held the Intercontinetal Championship for 63 days, until he dropped the strap to Chris Benoit. Van Dam and Benoit faced off for a second time at Summerslam 2002, where Van defeated Benoit, and began his third reign with the IC title. RVD held the gold for 22 days, which is the third time he held a title for that amount of time, until losing to Chris Jericho. Van Dam would have to wait until 2003 to hold the title for a fourth time, and did just that, after he defeated Christian in a… ladder match! Van Dam maintained his title reign for 28 days, until Chris Jericho defeated Van Dam for the title, for the second time. Van Dam immediately regained the title on the same night, and started his 5th run with the mid-card title. RVD defended his title all the way to Armageddon, where he faced off with Randy Orton. Randy and Van Dam battled over the Intercontinental Championship, with Orton prevailing victorious, and putting an end to Van Dam’s 48 day stint with the title. Rob also briefly held the WWE World Tag Team Championships with Kane, as well as Booker T during this time, and would soon make his way to the top of the food chain.

One of A Kind

On the February 6, 2006 episode of Raw, the Road to Wrestlemania 22 tournament kicked off. Van Dam defeated Carlito in the quarterfinals, and Chris Masters in the semifinals. The other semifinal match between Triple H and The Big Show ended in a double count out, which set up a triple threat match for the tournament finals. Van Dam lost the match when Triple H pinned The Big Show, and fell just one match short of a WWE Championship opportunity. The next week on Raw, Van Dam competed in a Money In The Bank qualifying match, and took on Trevor Murdoch. Van Dam won the match, and moved on to “The Grandest Stage of them All”, Wrestlemania 22. At the event, Van Dam competed against Bobby Lashley, Ric Flair, Finlay, Matt Hardy, and Shelton Benjamin. RVD climbed the ladder, and grabbed the briefcase, earning himself a future WWE Championship or World Heavyweight Championship opportunity. Rob followed up by putting the briefcase on the line at Backlash, in a match with a unique stipulation. Van Dam faced off with Intercontinetal Champion Shelton Benjamin at the event, with both the title and the briefcase on the line. RVD retained his contract, and earned a sixth Intercontinetal Championship reign in the process. Van Dam dropped the strap to Benjamin 40 days later, but the cream continued to rise to the top. Van Dam would be drafted back home, kind of, when WWE brought back ECW. RVD cashed in his Money In The Bank contract at ECW One Night Stand, and took on WWE Champion John Cena. In the closing moments of the match, Edge appeared, after a second referee went down, and speared Cena. Van Dam followed up with a Five Star Frog Splash on Cena, and Paul Heyman made the count, as RVD finally won the WWE Championship. Van Dam moved on to the debut episode of WWECW, where Paul Heyman named Van Dam the brands first ECW Champion. The crowning as the ECW Champion made Van Dam the first person to hold the ECW and WWE Championships, as well as the first and only person to hold both at the same time. The dual Champion also became the 15th WWE Triple Crown Champion, and moved on to Vengeance, where he defeated Edge to retain the WWE Championship. Only two nights later, “The Whole F’N Show” defended his ECW Championship against a “wrestling machine”, and put away Kurt Angle, during an episode of ECW on SyFy. At some point in the days after the episode, Van Dam faced real life troubles, and the consequences resulted in championships shuffling. Van Dam defended the WWE Championship on the next week’s Raw, and lost the title to John Cena, in a triple threat match that also involved Edge. The next night on ECW, Van Dam defended his ECW Championship, and lost to The Big Show, after Paul Heyman turned on Van Dam. The punishment didn’t stop there, as RVD would be suspended for 30 days after the match. By the time 2007 rolled around, Van Dam began to spin his wheels with the company, and decided to take time away.

During the 2013 Payback event, WWE announced that Rob Van Dam would be returning to the company, and taking part in the WWE Championship Money In The Bank ladder match. Along with Van Dam, Randy Orton, Christian, CM Punk, and Daniel Bryan competed for the briefcase, at the Money In The Bank event. Orton grabbed the contract, and Van Dam moved on to the Smackdown brand. Van Dam rebranded himself as “Mr. Friday Night”, and began a feud with World Heavyweight Champion Alberto Del Rio. Van Dam competed against Del Rio at Night of Champions and Battleground, but came up short of claiming the big gold belt both times. Shortly after the conclusion of the brief feud, Van Dam took another break. The man who is “one of a kind” returned during the April 7, 2014 episode of Raw, and entered into a Intercontinental Championship tournament. During the tournament, Van Dam defeated Alberto Del Rio in the first round, and Cesaro in the semifinals. RVD took on Bad News Barrett in the finals, in a losing effort. Van Dam earned himself a second opportunity at Barrett’s Intercontinental Championship, by defeating Alberto Del Rio in a beat the clock challenge. RVD faced off with Barrett at Payback, where he lost to Bad News once again. Van Dam moved on to compete in yet another Money In The Bank match after the loss, where he took on Seth Rollins, Dean Ambrose, Dolph Ziggler, Jack Swagger, and Kofi Kingston. Rollins won the briefcase, and Seth met up with Van Dam nearly a month later. RVD took on Seth Rollins during an episode of Main Event, and defeated Rollins via count-out. Van Dam met up with Rollins once again on Smackdown later that week, and failed to defeat the Money In The Bank contract holder, in his last match with the company. Van Dam appeared again at the 2014 Slammy Awards, and moved on from the company for a second time after that. RVD made one last appearance on a WWE show, at the 2019 Raw Reunion. During the show, Rey Mysterio took on Sami Zayn. Zayn tried to bail on the match, but he would be stopped by Van Dam, Sgt. Slaughter, The Hurricane, and Kurt Angle. Once the segment ended, Van Dam’s WWE story came to a close, ending a pretty stellar time with the company.

Man, Van Dam was such a fun athlete to watch! WWE seemingly strapped the rocket to him from the beginning, where his highlights were extra high. Sadly, things got a little to high, and that led to Van Dam being stripped of two titles in the same week. After the massive setback, WWE never pushed Van Dam again. Once he came back, he had seemingly only been signed so other companies couldn’t have him.

That’s all for this weeks edition of the column! Enjoy Fastlane everyone!!

How It Started vs How It Ended: Rob Van Dam