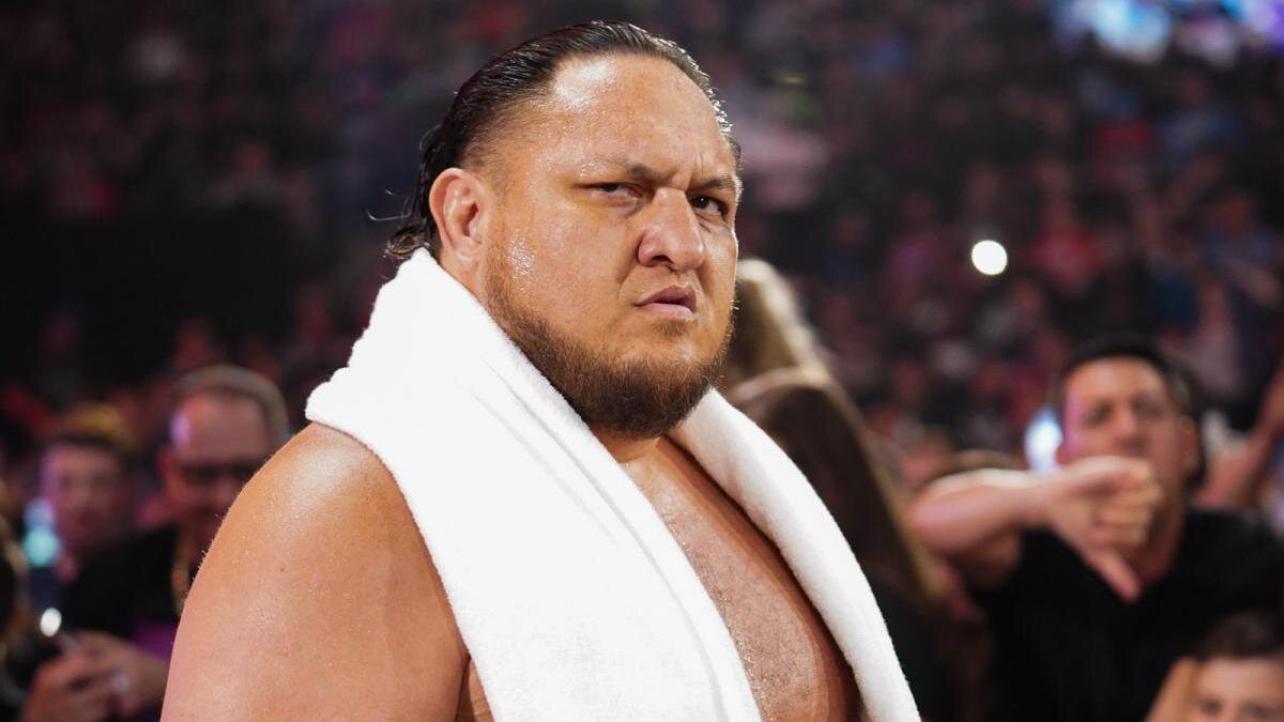 How It Started vs How It Ended: Samoa Joe

Welcome back to How It Started vs How It ended! This edition of the column will cover the up and down WWE career of Samoa Joe, and highlight some of his greatest moments in the ring. Here’s how it started:

Samoa Joe made his WWE debut on the NXT brand at the May 20th, 2015 NXT Takeover: Unstoppable. After Kevin Owens and Sami Zayn battled over the NXT Championship in that night’s main event, Owens proceeded to beat Zayn down with a chair. While Kevin brought the hammer down on Sami in the ring, Samoa Joe entered the Full Sail studio for the first time, and received a huge babyface pop. The commotion brought Owens to a halt, and he eventually found himself face-to-face with Joe, before backing away from “The Samoan Submission Machine”. Joe had his first match in a black and gold ring during the June 10th episode of NXT TV, defeating Scott Dawson with the Muscle Buster. After a feud with Owens that left fans wanting more, Joe moved on to NXT Takeover: Brooklyn, where he picked up his first Takeover win. Joe defeated Baron Corbin at the event, after causing him to pass out to the Coquina Clutch. Samoa Joe seemingly rid himself of Corbin after the match, and paired up with NXT Champion Finn Balor, in an effort to win the first ever Dusty Rhodes Tag Team Classic. Joe and Balor began the tournament with a win over The Lucha Dragons, and moved on to their second round matchup rather easily. When the quarterfinals of the tournament were set, Joe and Balor faced off with Colin Cassidy and Enzo Amore, picking up another impressive win in the process. Joe met up with Scott Dawson again in the semi-finals, with Joe prevailing once again, and helping his team advance to the tournament finals. The tournament deciding match went down at NXT Takeover: Respect, where he met up with another foe from the past, Baron Corbin, who teamed with Rhyno. In the match’s closing moments, Samoa Joe hit the Muscle Buster on Rhyno, followed by a coup de gras from Balor, earning his team the first ever Dusty Cup. Things remained cordial between Joe and Balor over the next few weeks, but their story would soon take a turn.

Rising To The Top

When the November 4th 2015 episode of NXT TV went down, Finn Balor took on Apollo Crews, with the NXT Championship on the line. During the match, Baron Corbin ran in, and attacked both men, until Samoa Joe ran down to make the save. Joe and Corbin had a stare down for a moment, before Joe turned his attention to Balor, who had just made his way to his feet. Samoa Joe proceeded to beat his former partner down, kicking off a rivalry for the top prize in NXT. The following week on NXT TV, Joe planted his heel flag in the middle of the ring, and explained why he attacked Balor. Joe stated that the Champion promised him a future shot at the title, if he would be his partner in the Dusty Cup Tournament. Joe received his first shot at the NXT Championship during NXT Takeover: London, where Balor made his way to the ring in his Demon persona. In the closing moments of the match, Joe tried to set up for the Muscle Buster, but Balor fought him off, and hit the coup de gras for the win. The calendar changed to 2016, where Joe briefly moved into a feud with Sami Zayn over number one contenders status. Joe eventually earned the chance to face Balor again at NXT Takeover: Dallas, and took yet another loss to The Demon King. Both men hit the ring for another Championship showdown at an NXT live event, where Samoa Joe finally claimed the NXT Championship. Joe looked to close the book on his rivalry with Balor at NXT Takeover: The End, in a match that took place inside a steel cage. In the closing moments of the match, Joe scooped Finn up for the Muscle Buster, and finally picked up a win against The Demon. Joe held the title for 121 days, before dropping the strap to Shinsuke Nakamura. After their match at NXT Takeover: Brooklyn II, Samoa Joe and Nakamura began a rivalry that went all over the world. Joe and Shinsuke met up in Canada at NXT Takeover: Toronto, where Joe regained the NXT Championship, and became the first ever two-time NXT Champion. Two short weeks later, Shinsuke and Joe hit the ring in Japan, with the NXT Championship on the line once again. In the final stages of the match, Shinsuke hit the Kinshasa on Joe for the win, and the pair moved on to do battle in a fourth different country. Joe and Nakamura duked it out one last time in Australia, where Shinsuke retained the title, and brought Joe’s time at the top of the NXT card to a close.

“The Samoan Submission Machine” competed in his final match with NXT on January 25th, 2017. Joe went to battle with Bobby Roode by his side, and fell in defeat to the team of Shinsuke Nakamura and Tajiri. Samoa Joe appeared in the crowd at NXT Takeover: San Antonio, before making his Monday Night Raw debut, during the January 30th edition of the show. Joe attacked Seth Rollins during the episode, and aligned himself with Triple H, before stepping into the Raw ring for the first time against Roman Reigns. While Joe and Reigns went toe-to-toe, Braun Strowman stormed down to the ring, and the distraction allowed Joe to pick up the victory. Samoa Joe and Seth Rollins met up again at Payback, where Rollins handed Joe his first loss on the main roster. Samoa Joe set out for revenge against Rollins, and cost him a shot at the Intercontinental Championship, before meeting up with him again in a Fatal-4-Way match. Joe and Rollins, along with Finn Balor and Bray Wyatt fought for the chance to take on then Universal Champion Brock Lesnar. Joe earned the right to face “The Beast Incarnate”, at Great Balls of Fire, setting up a battle of the behemoths. Samoa Joe started the match by driving Lesnar through the announce desk, and even had the Coquina Clutch locked in during the latter stages of the contest. Lesnar turned the tables on Joe with an F-5, and put away Samoa Joe, after an outstanding effort from “The Samoan Submission Machine”. Joe would be sidelined two different times to finish out his first stint on Raw, and began competing on Smackdown, during the 2018 Superstar Shake-up. Joe worked his way into a feud with then WWE Champion AJ Styles to kick off his run with the blue brand, and defeated “The Phenomenal One” at Summerslam, via disqualification. The feud between the two became extremely personal, and Joe took multiple worked-shoot style shots at Styles family, and specifically AJ’s wife Wendy. The feud would be verbally dominated by Joe, but Styles owned him in the ring, defeating him three straight times. Joe then moved into 2019, as well as the United States Championship picture, where he eventually took to the ring for a Fatal-4-Way match. Joe took on R-Truth, Rey Mysterio, and Andrade on the May 5th episode of Smackdown Live, and walked away as the new United States Champion. All four men hit the ring again at Fastlane, where the match ended just like the first one. Joe entered a feud with Mysterio during the Road to Wrestlemania, and both veteran performers did battle at Wrestlemania 35. Unfortunately, Joe’s first Wrestlemania match ended in highly disappointing fashion, after Joe won the match by technical submission in one minute, as a result of real life injury issues. Samoa Joe met up with Mysterio again at Money In The Bank, where Joe dropped the strap to Mysterio. Days later, Mysterio would relinquish the title due to a shoulder injury, and be forced to hand the title back to Joe. The result made Joe a two-time United States Champion, and he carried the title with him to Raw, as a part of the 2019 Superstar Shake-up. Joe jumped straight into a feud with Ricochet, and both incredible athletes met up at Stomping Grounds, with the US Championship on the line. In the closing moments of the match, Ricochet hit the 630, and put away Joe for the win. The result of the match marked the final time Joe would walk to the ring with Championship gold, who unknowingly entered the final stage of his WWE career after this.

After losing the United States Championship to Ricochet, Joe set his sights on the WWE Championship, and attacked then WWE Champion Kofi Kingston. Samoa Joe dropped a singles match for the title at Extreme Rules, before taking a trip to Smackville for a triple threat WWE Championship bout. Joe hit the ring to take on Dolph Ziggler and Kofi Kingston at the event, losing the match after Kofi pinned Ziggler. Joe entered the 2019 King of the Ring tournament after the match, and made it all the way to the semi-finals, before losing to the eventual winner, Baron Corbin. Sometime during the tournament, Joe suffered an injury to his thumb, leading to his Raw commentary debut. Samoa Joe replaced Dio Madden during the November 18th edition of Raw, and remained at the desk until the December 23 episode, where Joe would be attacked by AOP. The following week, Joe made his return to the ring in heroic fashion. While Kevin Owens received a beat down from AOP and Seth Rollins, Joe ran down to save Owens, turning face in the process. Joe followed up by competing in the 2020 Royal Rumble match, where he entered 29th, before being eliminated by Rollins. Two weeks later, Joe teamed up with Owens and The Viking Raiders, and lost to AOP, Rollins, and Buddy Murphy. 10 days later, Joe found himself on the injury list again, after a head injury while shooting a commercial, forced him to sit out, and eventually join the Raw announce team for a second time. Joe took over for Jerry Lawler, and held a seat at the commentary desk until WrestleMania 37. Samoa Joe would be replaced by Corey Graves the next night on Raw, and on April 15, Joe received his release from the company.

That’s all for this week’s edition of the column. Have a great rest of your week everyone!

How It Started vs How It Ended: Samoa Joe