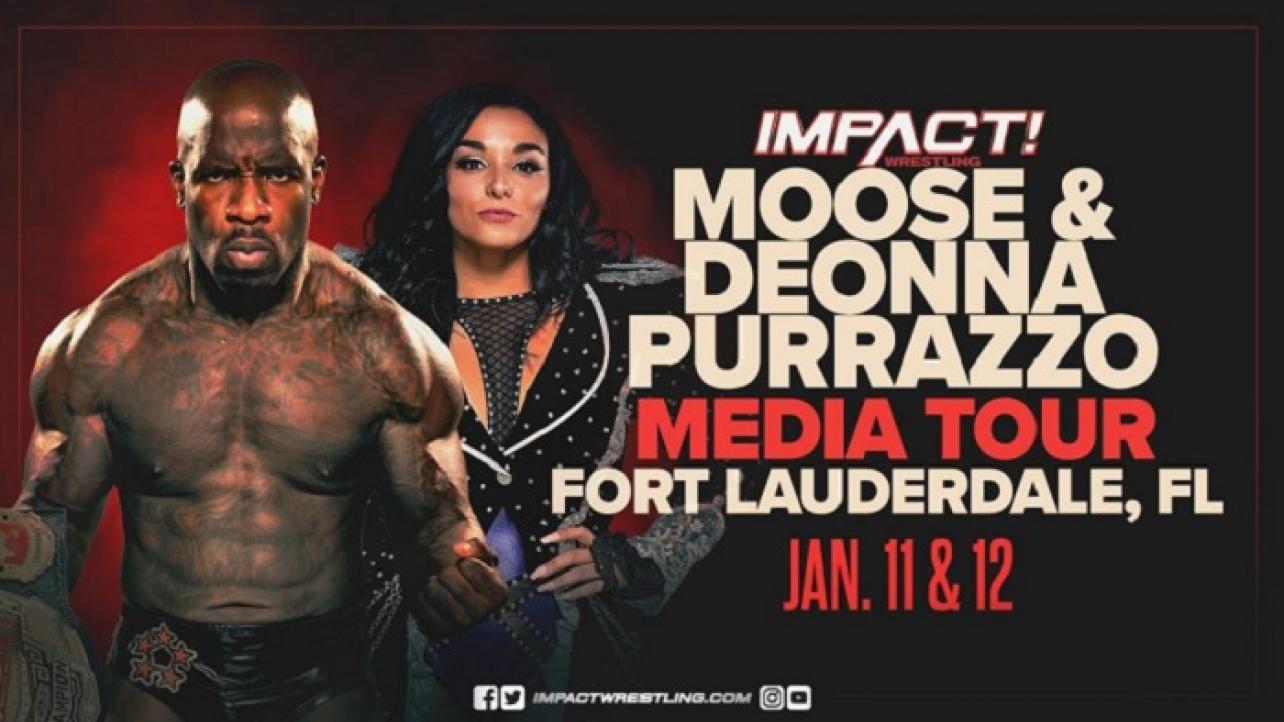 IMPACT Wrestling returns to Fort Lauderdale for the first time in almost 10 years.

IMPACT Wrestling presents two nights of action-packed live pro wrestling on Friday and Saturday, January 21-22, live at the Charles Dodge Center in Pembroke Pines, Florida. The shows are IMPACT’s first in the Fort Lauderdale area since April 2012. In fact, when the first match starts on January 21st, it will be the first IMPACT show in Fort Lauderdale in 3,546 days.

The action both nights will be taped to air on IMPACT’s flagship weekly TV show, Impact!, which airs every Thursday night (8-10 p.m. ET) on AXS TV in the U.S., Fight Network in Canada and Impact Insiders on YouTube.

Moose is in his first World Championship run after winning the title at the Bound For Glory pay-per-view in Las Vegas this past October.

Quinn Ojinnaka, the real-life Moose, played for four teams over seven seasons in the National Football League, including the New England Patriots, before transitioning to pro wrestling, making his debut in 2012. His NFL career included time as teammates with legendary quarterback Tom Brady while playing for one of the best NFL head coaches in history, Bill Belichick.

An offensive tackle/guard, Ojinnaka played in 62 NFL games after playing at Syracuse University. He was selected in the fifth-round of the 2006 NFL Draft by the Atlanta Falcons. Moose & Bill Goldberg are the only former NFL players from the modern era to have gone from the NFL to become the World Champion of a pro wrestling company.

In fact, there are only four others in addition to Moose & Goldberg to have ever gone from the NFL to World Championship glory in pro wrestling, including Bronko Nagurski, who is a member of the Pro Football Hall of Fame. The others are: Ernie Ladd, Dick the Bruiser and Gus Sonnenberg.

Sports Illustrated in November spotlighted Moose and his record-setting journey from the NFL to IMPACT World Champion: https://tinyurl.com/r8hdutuy.

A New Jersey native who has been wrestling professionally since 2013, Purrazzo was ranked No. 3 of 150 female wrestlers in Pro Wrestling Illustrated’s Women’s 150 in 2021.

“IMPACT Wrestling and pro wrestling as a whole has a long, rich history in the state of Florida, so everyone is thrilled to return to the Sunshine State,” said IMPACT Executive Vice-President Scott D’Amore. “Florida was the company’s home for many years; it’s great to return.”

IMPACT was last in South Florida in March 2014 for the Lockdown pay-per-view, which was held in Coral Gables.

Many of the matches for the Fort Lauderdale shows will be announced in the coming weeks, but surprises are a certainty, too, including wrestlers making their IMPACT Wrestling debut.

Tickets for the IMPACT shows in Fort Lauderdale on Friday & Saturday, January 21-22, are now on-sale. For Tickets: