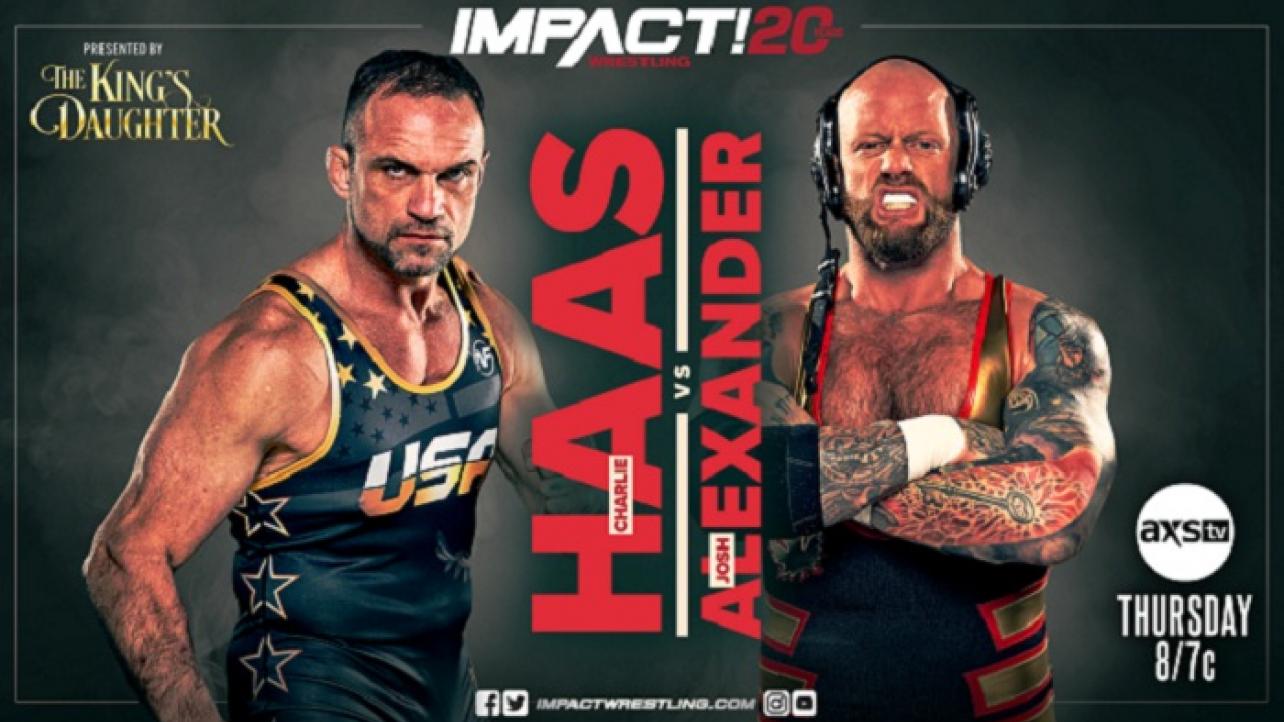 IMPACT On AXS TV returns with their second episode following the ROH invasion at their Hard To Kill pay-per-view this evening.

On tap for tonight’s show is Josh Alexander vs. Charlie Haas, Jonathan Gresham vs. Steve Maclin for the ROH Championship in a “Pure Rules” match, as well as Doc Gallows & Joe Doering vs. Heath & Rhino.

Also scheduled for the show this evening is W. Morrissey vs. VSK & Zicky Dice in two-on-one Handicap match, The Influence vs. Decay and Tasha Steelz vs. Chelsea Green.

Featured below are complete IMPACT On AXS TV results from Thursday, January 20, 2022.

This week’s show kicks off with the usual “We own the night” theme and then we shoot inside the arena as the commentary team welcomes us to tonight’s program.

As the camera settles inside the ring, we get ready for our first segment of the evening. The sounds of “Hardcore Country” fills the building as the IMPACT Knockouts Champion Mickie James makes her way out.

The IMPACT representative in the 2022 WWE Women’s Royal Rumble match continues down to the ringside area wearing a Dallas, Cowboys shirt, however she will be providing some guest vocals on the background of the opener, as a different Knockouts match will be kicking things off inside the squared circle tonight.

With that said, out comes Tasha Steelz and Chelsea Green with their respective solo ring entrances, as their advertised one-on-one showdown in the Knockouts division is our opening bout. Steelz brings the Ultimate X she captured by winning the first-ever Knockouts Ultimate X match at the recent Hard To Kill pay-per-view.

The bell sounds and we’re off-and-running with this one. Early on we see some back-and-forth action between these two. Steelz ends up connecting with a cutter that gives her the clear-cut offensive advantage. She continues to work over Green, however the better-half of Matt Cardona ends up hitting a crazy slam-style move that buys her some time to recover.

After giving back some punishment to Steelz, we see Green on the receiving end of a big move from Tasha that leads to her taking back over. Ultimately, she hits a crucibix bomb shortly thereafter to secure the pin fall victory in a relatively quick match.

After the match, we shoot to the man who said, “I do” to the Knockout who came up short in the opening match of tonight’s show moments ago, as Gia Miller is standing by with Matt Cardona.

The creator of the “Z! True Long Island Story” digital series during his run as Zack Ryder in WWE knows a thing-or-two about social and digital media content.

He reveals he’s got his sights set on a title in IMPACT Wrestling, as he has designs on the Digital Media Championship. With Jordynne Grace being the current owner of this gold hardware, that could be an interesting story to follow.

A Look At Charlie Haas Ahead Of Tonight’s Main Event

After an ad for the IMPACT Rebellion 2022 pay-per-view scheduled for April 23 airs, we move to some footage of one-half of tonight’s main event competitors.

On that note, a video package airs for Charlie Haas, who made his presence felt by showing up at the IMPACT Zone in Dallas last week on the AXS TV show.

Footage is shown of Haas working as part of a tag-team with Shelton Benjamin, his international success and more is included.

We even see shots of him working in the promotion that has been invading IMPACT as of late, which is Ring Of Honor. The main event between Haas and Josh Alexander for later in the show this evening is hyped up.

Decay vs. The Influence

As we settle back into the arena from the break, we get the entrances out of the way for our second bout of the evening, as Decay and The Influence make their respective entrances for this match in the Knockouts tag-team division.

On commentary we still have the two-person duo of Tom Hannifan and Mickie James, who are joined by Kaleb with a K for this one. The bell sounds and we’re off-and-running with Rosemary & Jessika Havok against Madison Rayne and Tenille Dashwood.

In the end, saw Rayne and Dashwood score the victory after Rosemary gets injured and the two beat Havok in an impromptu two-on-one handicap match.

After the match we hear from The IInspiration, who have some choice words for the Knockouts in the ring. They crack some jokes, banter a bit and that’s about all.

A vignette airs hyping the arrival of a new addition to the IMPACT Knockouts division airs, in what has been a very Knockout-heavy hour number one of this week’s show. The video package wraps up with text flashing across the screen that reads, “Quintessential Diva is Coming!”

We shoot backstage and we see John E. Bravo showing up looking for Brunhilda. He leaves and then Ace Austin gives “Speedball” Mike Bailey, saying he knows where to find him.

This is done after Austin initially approached Bailey along with Madman Fulton and spoke to him about needing to make the right friends in the IMPACT Wrestling locker room.

The next match gets in the ring after we are treated to the ring entrances of VSK and Zicky Dice, who are out to impress Brian Myers but are taking on a big risk in the process.

W. Morrissey makes his way out looking like a killer, ready to tear his way through this two-on-one handicap match on the same duo he mishandled during the IMPACT World Title showdown against Moose.

This week, Morrissey hits the ring like a bat out of hell and much like last week, Donkey Kong’s both of them into the mat and this time scores the victory in the process.

Afterwards, Morrissey again makes it clear that he wants a shot in the ring with Moose with the IMPACT World Title on-the-line.

W. Morrissey Gets His Shot At IMPACT No Surrender

We catch up with Morrissey backstage moments after his victory and he is approached by IMPACT executive Scott D’Amore.

D’Amore informs him that Moose is not here, but that he will get to square off in the ring with him when it matters — for the title at No Surrender.

Now we head back down to the ring where we get ready for our next match of the evening, which will be for the ROH Championship and contested under “Pure Rules.”

With that said, ROH World Champion Jonathan Gresham makes his way to the ring, as does Steve Maclin, and this one is about to get off-and-running.

The bell sounds to get things started. After some initial exchanges, we see Maclin get warned for landing a shot with a closed fist, which is illegal in a “Pure Rules” contest. You only get two warnings before things are called off.

As the action continues, we see other ROH stars who recently invaded IMPACT at their Hard To Kill pay-per-view, as well as last week’s IMPACT On AXS TV show, make their way into the building to watch their fellow ROH member defend his title.

Matt Taven, Mike Bennett, Maria Kanellis, Vincent and PCO are shown filing into the arena to watch this one up-close. As Maclin continues to dominate things in the ring, he secures a hold on Gresham, who eventually uses up all of his rope breaks — another “Pure Rules” match-rule that is unique to this type of contest.

Gresham uses a thumb-twisting set-up to get free from the Camel Clutch and tries fighting back into competitive form, however he gets slammed with a vengeance for his efforts. Gresham is now starting to take over on offense. In the end, he pulls off the win to retain his ROH World Championship.

Backstage With The ROH Invaders

We shoot backstage to see the ROH invaders. The guys exit the building after Gresham earns the victory and retains the ROH title. We see PCO scare security on his way out.

After a quick break, we head back to the ring where it’s time for our co-main event of the evening, which will be featured in the tag-team division.

The make-shift duo of Doc Gallows of The Good Brothers and Joe Doering of Violent By Design make their way to the ring. Karl Anderson heads over and jumps on guest commentary for this one.

Now we see their opponents make their way to the ring, as “The ManBeast” Rhino and his tag-team partner Heath make their way out and settle inside the squared circle as well.

Once the bell starts this one off, it’s immediately on as they get after things in a hurry. We see the babyface duo start off strong, but it isn’t long before Gallows and Doering are dominating the action.

From there, things start to get competitive again until we work to the finish of this one, which sees Gallows and Doering earn the victory after Deaner of VBD sneaks in a flag shot to Heath for the assist.

It’s main event time! Things are getting in gear now for the final bout of the evening, which is the one-on-one showdown between Josh Alexander and Charlie Haas. The bout was set up after Haas appeared in IMPACT for the first time last week and was involved in a pull-apart brawl with “The Walking Weapon.”

After the commentators run down the lineup for next week’s IMPACT On AXS TV show, we head down to the squared circle where the ring announcer begins the pre-match ring introductions. Alexander and Haas each make their respective walks to the ring and soon thereafter, the bell sounds to get this one off-and-running.

We hear the commentary team put over Haas’ debut inside the ring for IMPACT as these two get in some exchanges early on. As the action continues, we see Alexander start to pull ahead. He settles into the offensive lead again. Haas starts to fight back and he begins targeting his attack to the knee of Alexander.

The two do a good bit of back-and-forth amateur wrestling on the mat, which prompts a positive response from the fans inside the arena. We head to a mid-match commercial break as the action in our main event continues. From there we see things work to the finish, which features “The Walking Weapon” earning the “W” with an ankle lock submission.

After The Match: Honor No More Invades Again!

Once the match wraps up, we see the two showing each other respect on the microphone and then out of nowhere, the ROH crew head out and invade IMPACT once more.

The crew beats down both Alexander and Haas. We see the beatdown continue and then Maria Kanellis-Bennett takls about how the crew used to believe in honor, but all that has changed.

With ROH on hiatus, it appears this invading crew is an outlaw outfit that will now be referred to as Honor No More. We see the beating continue and then Chris Sabin runs out, as does Willie Mack and Rich Swann.

Eventually they even the odds a bit and then we go off the air. That’s how this week’s show wraps up. Thanks for joining us!