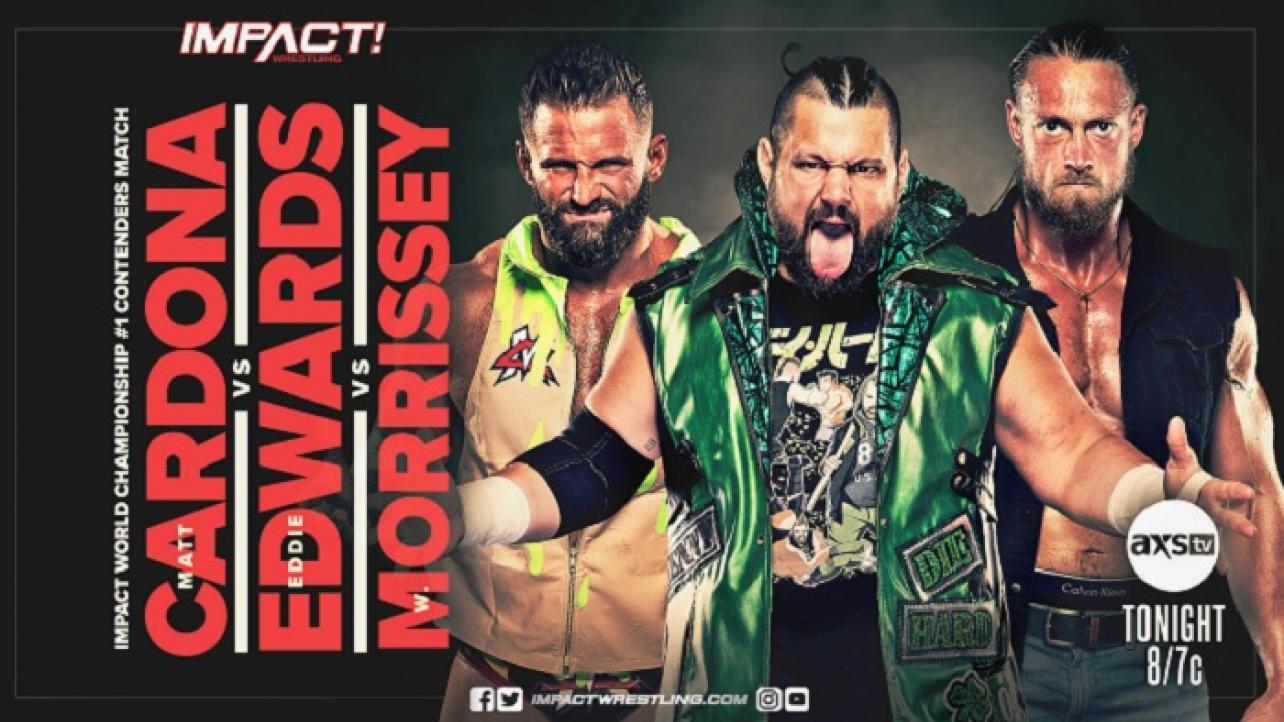 The road to the IMPACT Hard To Kill 2021 pay-per-view continues this evening.

IMPACT On AXS TV returns this evening starting at 8/7c from Sam’s Town Live in Las Vegas, Nevada with the latest build to their upcoming Hard To Kill PPV show scheduled for November 20, 2021.

Things gets started with the Before The IMPACT pre-show at 7/6c on AXS TV and the official IMPACT Wrestling YouTube channel, which features Savannah Evans vs. Rachael Ellering in one-on-one action.

Also on tap for tonight’s show is an IMPACT World Championship Eliminator bout pitting Eddie Edwards vs. W. Morrissey vs. Matt Cardona, Undead Bridesmaids (Kimber Lee & Brandi Lauren) vs. Decay, Kaleb K With A K vs. Minoru Suzuki, Mercedes Martinez vs. Madison Rayne, Rohit Raju vs. Rocky Romero, as well as Savannah Evans vs. Rachael Ellering in a Before The IMPACT match.

Featured below are complete IMPACT On AXS TV results from Thursday, November 11, 2021.

This week’s show kicks off with the usual video package that starts off the program each and every week and then we hear the commentary duo welcome us to the show.

The duo of Chris Bey and El Phantasmo settle into the ring for our opening bout and their music fades down. Now we hear the familiar sounds of the FinJuice theme as David Finlay and Juice Robinson make their way down to the ring.

This will be a number one contender match to determine who will move on to challenge The Good Brothers for the IMPACT Tag-Team Championships next. The bell sounds and we’re off-and-running with this one.

Bay and Robinson get things going and we see Robinson begin to take over. He hits the ropes and lands a jumping back senton splash on the Bullet Club member to establish the early lead in the contest.

The lead doesn’t last for long, however, as the duo of Bey and Phantasmo begin to take over after a tag is made and some double-team action causes a shift in the offensive momentum.

As Robinson and Bey continue to duke it out in the ring after another tag, we see Robinson hoists Bey up with a delayed vertical suplex. Bey sends Robinson to the ropes, where ELP grabs a handful of his hair.

Robinson returns to the ring and gets locked into a pin. He frees out at two. El Phantasmo makes his first appearance. ELP and Bey join forces and keep Robinson isolated. Bey digs his nails straight down Robinson’s back.

ELP leaps off the top and uses the exact same move. Robinson and ELP exchange jabs. Robinson looks for the Left Hand of God, but ELP blocks it with a purple nipple twist. Finlay is tagged in and takes care of ELP on the outside.

Bey returns to the ring. Finlay wears Bey down and tags Robinson back in. Robinson sends Bey for a ride with an inverted atomic drop. The Flamboyant one drags Bey to his corner and tags in Finlay. Finlay soars down with a massive elbow drop.

Robinson hits a cannonball in the corner. FinJuice set up a Doomsday. Hikuleo interferes, which helps Bey stack Robinson up. Robinson recovers only to take ELP’s Sudden Death superkick to the face. Bey hooks the leg of Robinson. 1-2-3, the Bullet Club will meet The Elite for a title shot!

After The Match: The Good Brothers Attack!

Once the opener wraps up, the reigning IMPACT Tag-Team Champions hit the ring for a post-match attack on the new number one contenders. This leads to the Bullet Club clearing the ring of the champs and posing with their “Too Sweet” gesture to end the segment.

After the commentary duo of Matt Striker and D’Lo Brown run down the lineup for tonight’s show, we head backstage where Scott D’Amore is talking with Josh Alexander. They talk about how “The Walking Weapon” isn’t in the title eliminator main event later this evening.

Again we hear the inability to control his emotions come up when Alexander complains about something. D’Amore decides he will give Alexander the match of a lifetime, as he will be going one-on-one against Minoru Suzuki on next week’s show.

We shoot backstage and we see Brian Myers talking with Sam Beale about leading by example. A match ends up getting made between the two for next week.

Minoru Suzuki vs. Kaleb With A K

Now we head back inside the IMPACT Zone where it’s time for Kaleb With A to go one-on-one against Japanese legend Minoru Suzuki in our next match of the evening.

The epic ring entrance of Suzuki takes place and then the bell sounds to get our second bout of the evening off-and-running. During the match we see Josh Alexander watching the man he will be facing on next week’s show on a monitor backstage.

This one doesn’t go long at all, as Suzuki squashes Kaleb and picks up the easy showcase win. He hits a big move on Kaleb and the commentators talk about how Kaleb will never get out of his trademark neck brace again after this one.

Moose Talks About Contenders To His Title

We shoot backstage after the match and we see Moose standing by with Gia Miller for an interview segment. The IMPACT World Champion says that none of the guys in tonight’s main event to determine his next challenger intimidate him. He acknowledges that they are all ruthless men, but insist that no one is as dangerous as he is.

The Undead Bridesmaids vs. Decay

We head back down to the ring for our third bout of the evening, which will take place in the women’s tag-team division. The team of Kimber Lee and Brandi Lauren (The Undead Bridesmaids) will be taking on Havok and Rosemary (Havok).

Things get started with Decay taking out both Undead Bridesmaids and then The IInspiration come out and end up staying on the ramp to watch during the match.

Due to the distraction, we see the Bridesmaids take control of the match. They keep Rosemary stuck in the ring and they beat her down with double-team action until finally she makes it to her corner to tag in Havok.

When all was said and done, Decay ends up picking up the victory after they hit a neck-breaker and spear combo to finish off Lauren for the pin fall victory. When the match wraps up, we see The IInspiration hit the ring while avoiding to crash paths with Decay.

Now we move on to a promo segment where Heath and Rhino talk about the rough year that Heath has had while being on the sidelines with an injury. Heath claims the tension between them and VBD is not yet over. Rhino talks about wanting revenge on Eric Young and the two end up challenging VBD to a match at Turning Point.

The IInspiration Plan To Take Decay Out Of “Their” Knockouts Division

We shoot to a backstage promo segment featuring The IInspiration. The IMPACT Knockouts Champions vow to take Decay out of “their” Knockouts division next week.

From there, we move to another backstage promo segment featuring longtime IMPACT veteran Chris Sabin. Sabin talks about wanting a rematch against Ace Austin.

We head back down to the ring for our next match of the evening, which will be a one-on-one Knockouts match pitting Madison Rayne and Mercedes Martinez.

This one doesn’t last too long, and after a little bit of back-and-forth action, we see Mercedes pick up the win with a jumping knee and a school girl pin fall.

After The Match: Rayne/Martinez/Mickie James Brawl

When the match wraps up, we see Rayne attack Martinez after losing the bout. She attacks her with a ripcord cutter and then a chair shot. Finally Mickie James makes the save as she runs in to chase Mercedes out of the ring. From there, Martinez gets up and attacks James with her finisher.

Now we see Steve Maclin backstage and he is talking about wanting another crack at the X-Division Championship. Trey Miguel enters and the two talk back-and-forth and then Scott D’Amore steps in.

We move on to another backstage segment where Sam Beale accepts the challenge from earlier in the night by Brian Myers. He talks about learning a lot while watching him for a few months and then makes it clear he doesn’t want Rich Swann or Willie Mack to come out because he wants to beat Myers by himself.

NNow we see footage from last week’s show of Rohit Raju confronting Rocky Romero about skipping ahead in the order to get a match for the X-Division title. We return live and the match ends up getting made and it is happening now.

Rohit Raju makes his way out to the ring accompanied by Shera as we return inside the arena. He settles into the squared circle and his music fades down.

Rocky Romero’s theme hits and out he comes to a nice reaction from the fans in attendance. After he poses on the ropes, his music cuts off and it’s almost time for this onee to get underway.

Things get going with mirror spots and then a stand off, which elicits applause from the crowd. It wasn’t long after that when Romero takes over and hits some lucha ranas. The match continued with neither man dominating the offense and then Raju focuses on the arm and back of Romero as things progress.

After Romero fights back into the lead, we see Raju end up securing an armbar while Singh distracts the referee. Romero takes out Singh after breaking free, and hit his sliced bread spot on Raju, but still couldn’t finish him off. Finally, Raju blocks a tornado DDT and hits a drive-by kick to pick up the “W.”

Backstage Segment Leads To Another Match For Next Week

Hernandez tells Johnny Swinger in a backstage segment that he asked Scott D’Amore for a match against The Demon and Decay for next week. Then John E. Bravo enters and we learn that Fallah Bahh will be the third man for the team.

Who Will Challenge Next For Digital Media Title?

Chelsea Green cuts a promo about becoming the new number one contender to the IMPACT Digital Media Championship. This leads to Scott D’Amore booking a four-way match for next week’s show pitting Green against Alisha Edwards, Jake Something and Matthew Rehwoldt.

It’s main event time! The next challenger for Moose’s World Championship will be decided by the end of this match, which features Matt Cardona vs. Eddie Edwards vs. W. Morrissey.

After the ring entrances of the three competitors in our final bout of the evening, the bell sounds to get this one off-and-running. We see some fast-paced action in the early goings and then Morrissey starts to take over. He hits a double chokeslam on Edwards and Cordana.

We see Moose watching on as the action continues in the world title eliminator triple threat main event. Morrissey ends up sending Edwards into Cardona. Finally we see Edwards fire up and earn the win out of nowhere. With the victory, Edwards moves on to challenge Moose.