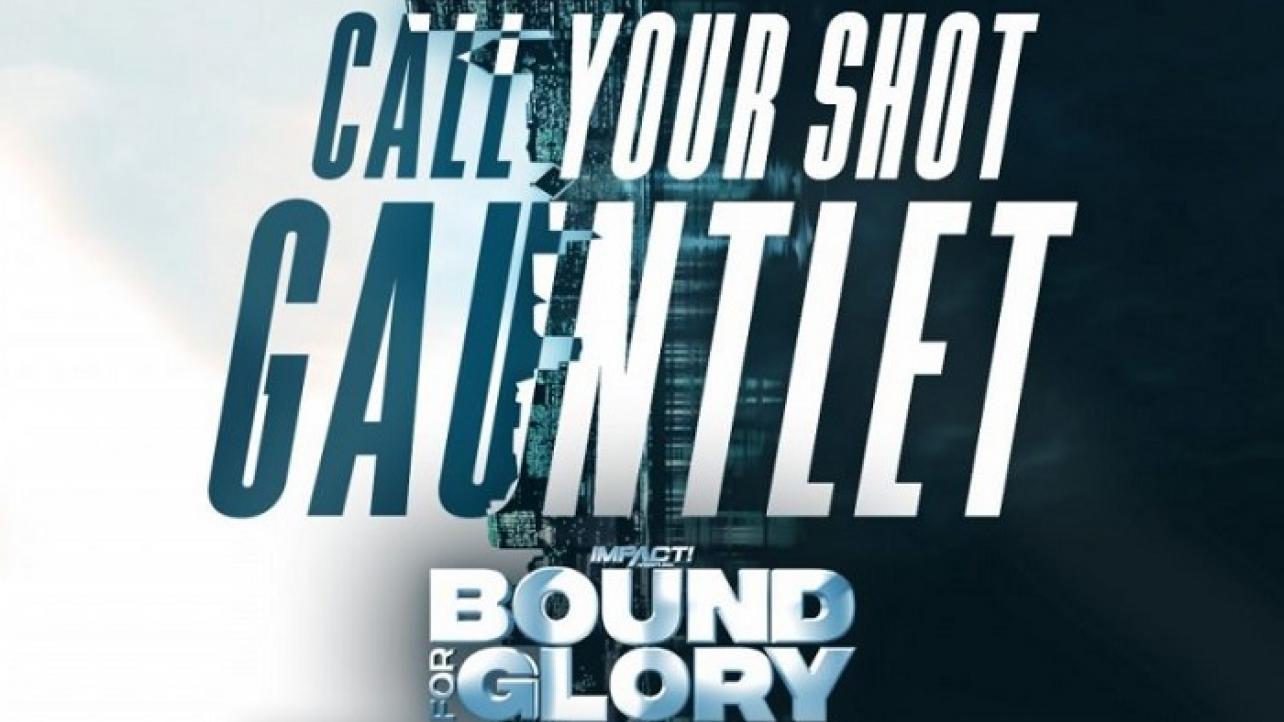 NASHVILLE, TN – (October 16, 2020) – The full card for the biggest IMPACT Wrestling Pay-Per-View of them all – BOUND FOR GLORY© on Saturday, October 24 – is locked in with seven exciting matches confirmed. All four championships will be on the line in Nashville and, today, IMPACT Executive Vice-President Scott D’Amore confirmed the first 10 contenders who will collide in the Call Your Shot Gauntlet.

In the unique Call Your Shot Gauntlet format, two wrestlers began in the ring and more are added as the match continues under battle royal rules. The final two left standing then compete in a one-on-one singles match, with the winner walking out with the right to challenge for any IMPACT championship – at any time of their choosing.

D’Amore said: “At last year’s BOUND FOR GLORY, Eddie Edwards emerged victorious after a brutal struggle in the inaugural Call Your Shot Gauntlet. Eddie bided his time until this past July’s Slammiversary, picking exactly the right moment to strike and win the World Championship.

“As you can imagine, everyone on the roster wants to win the Call Your Shot Gauntlet and we’re excited to announce the first 10 participants.”

D’Amore said the rest of the gauntlet participants will be announced on October 24.

The Gauntlet isn’t the only BOUND FOR GLORY match-up D’Amore has confirmed recently.

Last week on IMPACT! on AXS TV, D’Amore made what is sure to be a thrilling six-way encounter for the company’s coveted X-Division Championship. Taking Rohit Raju’s conceited boasts about giving challengers opportunities at face value, D’Amore ordered the champ to defend against Willie Mack, TJP, Chris Bey, Trey Miguel and Jordynne Grace.

“I just want to reiterate what a tremendous fighting champion Rohit is,” D’Amore smiled. “I understand how the fans could interpret some of his recent actions as avoiding challenges to his title, but we all saw how thrilled he looked when I informed him about the six-way scramble at BOUND FOR GLORY. He was so excited by the idea he could barely speak.”

D’Amore added: “The X-Division is not only synonymous with IMPACT Wrestling, it is synonymous with breathtaking in-ring action. These six competitors will deliver something special at BOUND FOR GLORY.”

Another exciting singles match recently added to BOUND FOR GLORY is the grudge match between Eddie Edwards and the man who delivered a vicious – and unprovoked – attack upon the former World Champion: Ken Shamrock.

D’Amore said: “Shamrock’s a legend in mixed martial arts and professional wrestling, but if there’s one man who will fight him tooth and nail, it is Eddie Edwards. Forget what type of match this will be – this is gonna be a fight!”

Another fight on the stacked card is EC3 vs. Moose, which is scheduled for “an undisclosed location.”

EC3 has been tormenting Moose for the last several months, but at BOUND FOR GLORY Moose has his chance to avenge the man who stole his TNA Championship belt and tossed it off a bridge. The two powerhouses will collide in what is surely going to be a brutal showdown.

Here’s a look at the BOUND FOR GLORY card: