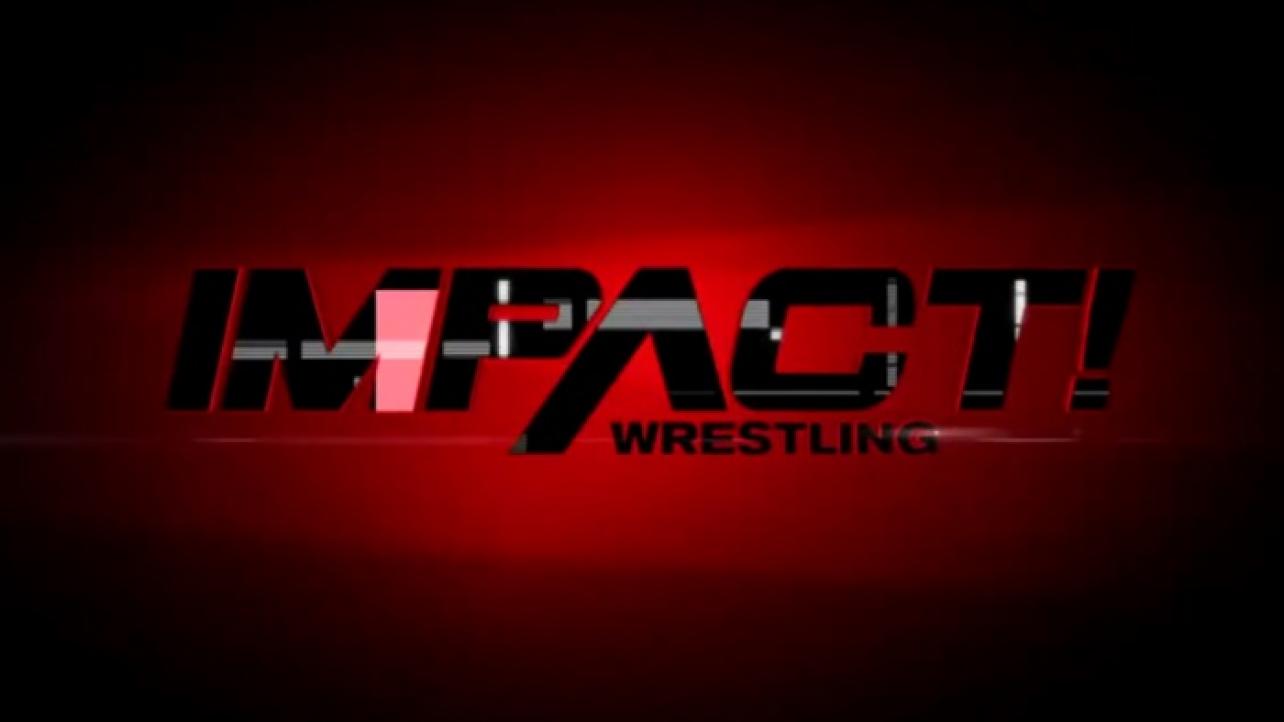 Featured below are complete spoiler results from the IMPACT taping, which come courtesy of Mr. Eddy G and ProWrestling.net.

1. Dave and Jake Crist beat “Pretty” Ricky Williams and El Reverso. OVE won when Jake had Reverso in a wheelbarrow position and Jake gave him a running cutter.

1. “Cowboy” Colt McKoy (Eddie Edwards dressed as a cowboy) beat Karu. Colt won with a cutter. He was attacked after the match and a fireball was thrown in his face (I didn’t recognize the guy or his manager).

2. Razor (Ace Austin) vs Rapid Delivery Pizza Pete (Rich Swann). Razor was dressed with punk rocker with a purple Mohawk and a spiked dog collar, and Pete was dressed as a pizza delivery man. Pete won with a running splash.

The Iceman set up for an interview outside the ring with Julian (Ethan Page) who was labeled as the “International Commonwealth TV Champion” and his manger Sonny Sanderson (Sami Callahan), who was dressed in a suit with a tennis racket.

Iceman set up for another interview with “Excessive Work” (Fallah Bahh and D-Lo Brown) vs “Hard Workers: Oats and Hall (Cody and Cousin Jake).

The Iceman sets up The Rough Riders (Tessa, Jordynne, Havok, and KC Spinelli).

5. Jazzy Fitbody (Madison Rayne) beat Agnes Deerheart (Alisha Edwards). Jazzy wins with a second rope splash. The Hitmaker “Sebastian Baker” (Jimmy Jacobs) tried to get Jazzy to sign a contract to become her manager, and Jazzy did, but low-blows Baker, and ripped up the contract.

Kongo Kong hosted a bodyslam challenge. Kongo Kong (The 300,000 Dollar Man) vowed that anyone who could slam him would receive $2,000. A guy named Ali tried his luck, but couldn’t do it. The jackpot was pushed up to $3,000. Mr. Atlantis tried next, but couldn’t slam Kong, who threw him out of the ring. “Muscle McGee” (Brian Cage) came out dressed in a Canadian trick suit. He said he want here for the money, slammed Kong, and took the gym bag with the 3,000 dollars.

7. DJ Too Large (Moose dressed as rapper with gold chains) beat Captain JoyStick (Joey Ryan dressed as an airplane pilot). Ryan was accompanied by Miss Mile High (Kiera Hogan dressed a stewardess). Moose tried to chop Joey in the lower regions and acted like he almost broke his hand. Joey brought a chair in the ring while the the referee was distracted and faked being hit, but DJ put it around his neck. The referee threatened to disqualify the Captain, but he removed the chair, and walked into a discus clothesline from DJ to get the win.

8. Cowboy Colt McKoy beat Gama Singh (w/Raj Singh) in blindfold match. Cowboy Colt won with a cutter. Iceman interviewed Colt in the ring after, but he was attacked by two Russian wrestlers (Mike Elgin and Madman Fulton). Scott D’Amore got in the ring and demanded they stop, but they attacked him, and put Russian Flags on both of them. Iceman interviewed Scott outside the ring after. Scott said he and Colt would wrestle the Russians next week.

9. The Soviets (Elgin and Madman Fulton) vs Muscles McGee (Brian Cage and Aiden Prince). Fulton got a mic and was about to sing the Russian national anthem, but attacked the babyfaces with it. Muscles got Fulton to submit with a Torture Rack.

There was a costume contest with a Macho Man, Tommy Dreamer, a mini Scott D’Amore, a mini-Don Callis, and a mini-NZO. The Macho Man was declared the winner.

10. Downton Danny Brown (Willie Mack) beat Julian (Ethan Page) to win the International Commonwealth TV Title. Julian was accompanied by his manager Sonny Sanderson (Sami Callahan). The end came when Sonny held Danny in the ropes and Julian charged but, Danny moved and he hit Sonny. Danny rolls up Julian to win the TV Title. The faces come down to celebrate with Danny. Sanderson gets in Danny’s face and says they’re never leaving town and Danny hit him with a Stunner.