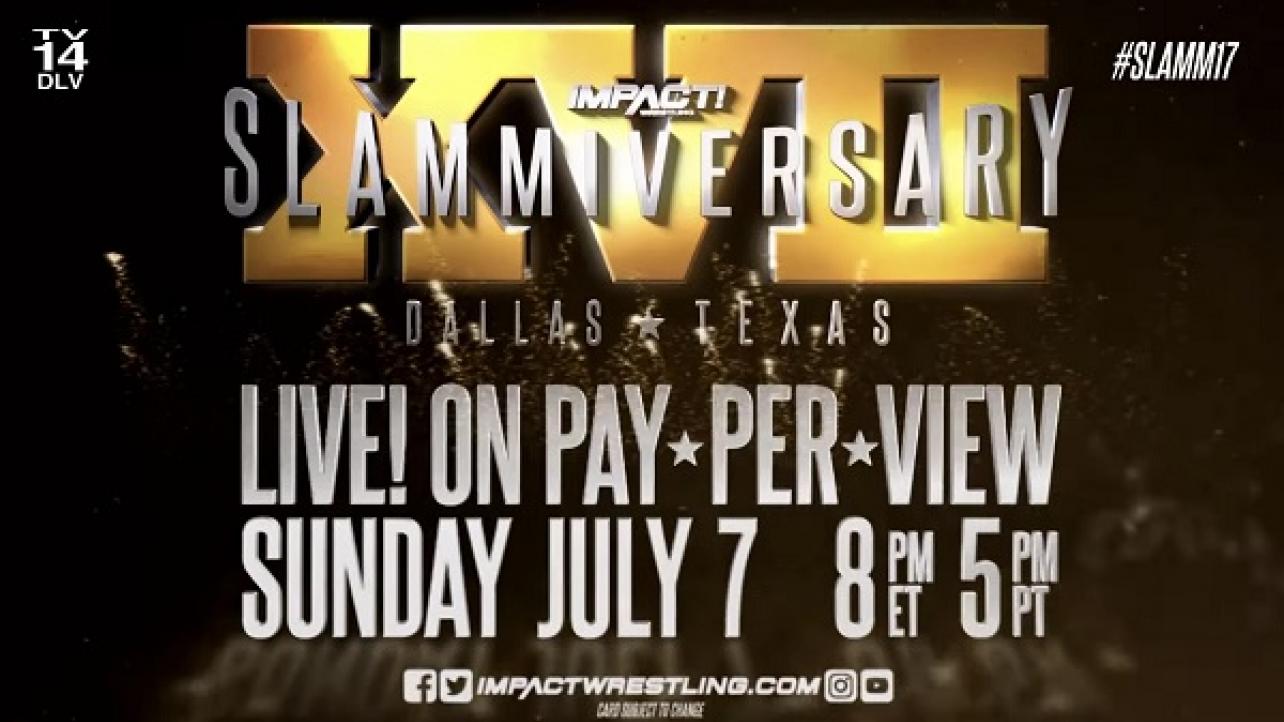 On Tuesday evening, Impact Wrestling issued a press release to formally announce ticket details for Gilley’s Dallas in Dallas, Texas, the host venue for this year’s Slammiversary XVII pay-per-view on Sunday, July 7th. Tickets for the PPV will go on sale starting this Friday, May 17th.

Titanium Ticket Packages Will Be Available Starting on May 17.

DALLAS – IMPACT Wrestling today announced ticket details for its biggest event of the summer: Slammiversary XVII, which will be held on Sunday, July 7, at Gilley’s Dallas, and will air live exclusively on pay-per-view.

IMPACT Wrestling will debut a new, expanded top-tiered ticket and fan experience program at Slammiversary XVII called Titanium which will replace the VIP Program. Titanium tickets will be priced at $200 and will include front-row seats, autographs, special photo opportunities and more. The Titanium ticket package will be limited and is expected to sell out almost immediately.

“We have had great success with the VIP Program over the past few years, as fans have enjoyed some truly unique interactive experiences with IMPACT Wrestling stars such as miniature golf, bowling and more,” said IMPACT Wrestling Executive VP Scott D’Amore. “We’re thrilled to launch the Titanium Package, which will be a truly exclusive experience for our die-hard fans.”

Full details for Titanium ticket-packages at Slammiversary XVII are still being finalized, but will include an assigned front-row ticket, a 20 percent discount on all merchandise at the show, three free months of IMPACT Plus, as well as a special commemorative program. In addition, Titanium ticketholders will get a unique pre-show commemorative photo, an autographed souvenir chair and The RVD Experience with IMPACT star Rob Van Dam. More details about the Titanium Package will be announced in the coming weeks.

Front-row tickets for Slammiversary XVII will be $100; premium floor seating will be $60 and general admission tickets will be on sale for $25.

The three-hour spectacular begins July 7 at 8 p.m. ET and will be available on all major pay-per-view distributors, including DISH, DirecTV, iN Demand, Vubiquity, Rogers, Bell, Shaw, Sasktel, and streamed live globally on IMPACT Plus and the FITE.tv app.

Slammiversary XVII marks the first time an IMPACT Wrestling pay-per-view event emanates from Dallas, and the fourth ever from Texas. Founded by country singer Mickey Gilley with its original location in Pasadena, Gilley’s was reopened in 2003 in Dallas and houses over 92,000 total square-feet.