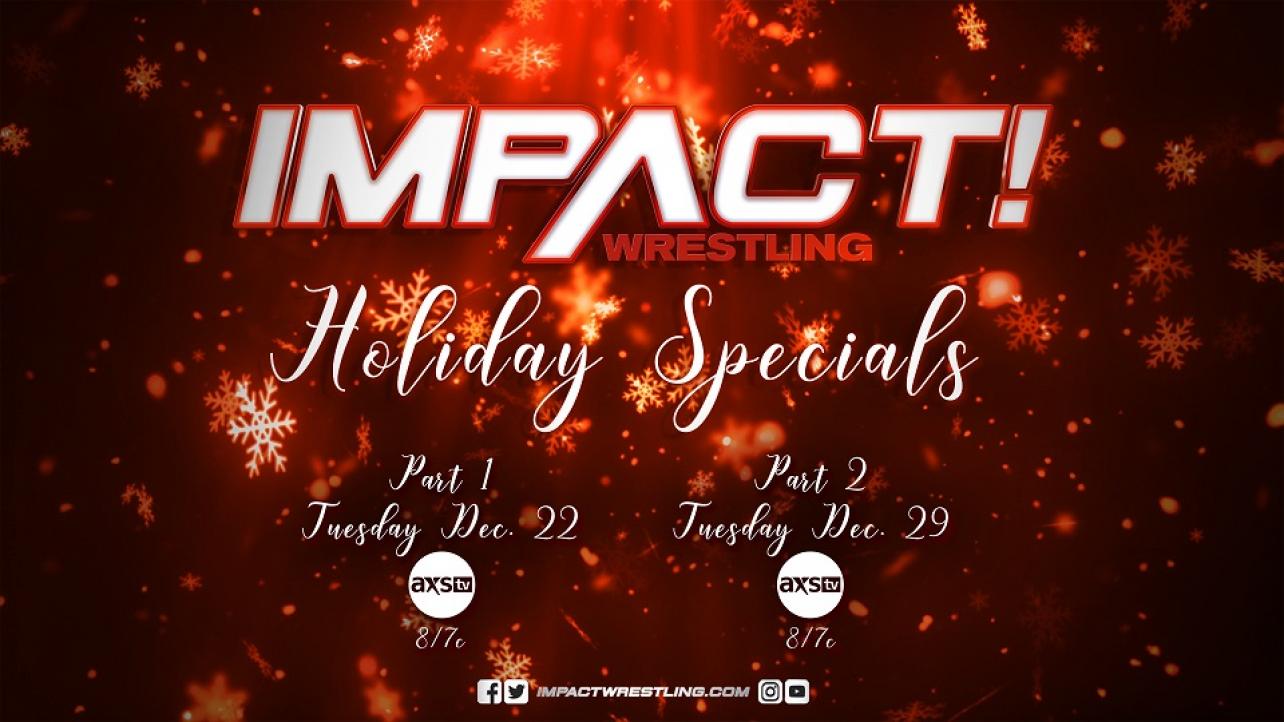 Welcome to eWrestling.com’s LIVE Coverage for the December 22, 2020 edition of Impact Wrestling’s holiday special “Best of 2020 – Part One” airing on the AXS TV Network and on Twitch at Impact’s normal time 8/7C.

Tonight’s Impact Wrestling holiday special features the start of the 2020 Year End of Awards. Impact will award the following categories, as voted by the fans:

Featured below is complete coverage for the December 22, 2020 edition of Impact Wrestling “Best of 2020 – Part One” holiday special. The following report was written by eWrestling.com’s longest running female reporter, Jamie Rush. Follow Jamie on Twitter @JamieRush312.

To kick things off for tonight’s Impact Wrestling “Best of 2020 – Part One” holiday special, we head into a flashback match highlighting the “Hard to Kill” match where Ace Austin Ace Austin defended his X-Division Championship against Trey Miquel.

As voted by the fans, the X-Division Superstar of the Year is… Ace Austin

Austin receives his award and follows up by hinting a possible return to the X Division since he’s apparently missed there!

We head to the announcer’s table where Josh Mathews and Scott D’Amore discuss the Slammiversary and what it meant as it changed professional wrestling’s landscape.

Next we head into the Impact Tag-Team Championship Match with The North vs. The Good Brothers from Turning Point as we are reminded that this match started the Good Brother’s title reign.

As voted by fans, we are then informed that the Impact Wrestling “Best of 2020” Tag Team of the Year winners are: The North (Ethan Page and Josh Alexander).

As voted by fans, the Impact “Best of 2020” Knockout of the Year is… Deonna Purrazzo

Deonna Purrazzo welcomes the award as she gives a run down of her accomplishments including but not limited to, being the first Ironwoman and a two time Knockout Champion.

Purrazzo then goes on to humbly accepted the award. She then adds that 2021 should be named the “Age of the Virtuoso” because it can only go up from here.

Next we head into a video clip of Moose vs. EC3 at Bound For Glory in an undisclosed location, showing the pivotal moment of 2020 for Moose.

No longer considered to be a “Mock Champion” for claiming to be the TNA World Heavyweight Champion, and this gave him credence as possibly the most dominate champion in professional wrestling.

We then switch over to Moose calling out Rich Swann last week by saying Swann stays hurt while he hurts people. We then see a confrontation between Moose and Willie Mack as they are surrounded by Impact security.

Next we head to the jail where Acey Romero visited Larry D. Larry insisted he was set up, and that Romero was standing next to him during the wedding.

He pointed out that when Lawrence D comes out he loses all control, and that someone sprayed Ring Rust to cause his transformation. Together they realize it may have been Crazy Steve, and Romero will do everything he can to help Larry.

We then head into a video package that highlights the romance and wedding of Bravo and Rosemary, followed by the trial that ensued thereafter.

Following the video package, we head into Eric Young’s return to Impact Wrestling as they focused on when he defeated Eddie Edwards for the Impact World Champion and the feud leading up to it.

Young’s attacks on Rich Swann is shown next, including Young’s match against Tommy Dreamer and others along the way as Young sought to dominate Impact Wrestling.

Finally, Joe Doering joining Young is shown as they ran over and through people before adding Cody Deaner.

Mathews points out that as messed up as 2020 has been, he never thought he’d see an Impact executive go to AEW Dynamite and help Kenny Omega win the AEW World Championship.

D’Amore commends him for doing what he did as it’s shifted the balance of power in professional wrestling.

We then head into a video recap of Callis and Kenny Omega over the last few weeks was shown next. Next we see Rich Swann calling him out.

As that ends, we get a live response from Callis and Omega as they discuss their history and how Callis asked Omega what he wanted for Christmas, and Omega told him he wanted to run the wrestling business. They add that Omega gave Impact the best Christmas present by showing up at the iMpact Zone.

Wrestler of the Year

Before announcing the best wrestler of 2020, Mathews asked D’Amore what he wanted for 2021, and D’Amore said another commentator.

It was a great way to close out the show after D’Amore sent plenty of barbs Mathews’ way.

Mathews goes on to their final catergory of the evening. It is time for the Impact Wrestling’s Best Wrestler in 2020 winner to be announced…. Deonna Purrazzo!!

Purrazzo states she’s not only the best technical woman wrestler, but she’s the best wrestler in the world.

All of us here at Rajah.com want to congratulate all of the winners during tonight’s Impact Wrestling “Best of 2020 – Part One” and we wish you all Happy Holidays!

**Be sure to return next week for Impact Wrestling “Best of 2020 – Part Two” as it airs Tuesday, December 29, 2020 at 8/7C and we will be here at eWrestling.com with LIVE coverage! Take care and Happy Holidays! As always, stay safe, stay healthy, and stay awesome!!**