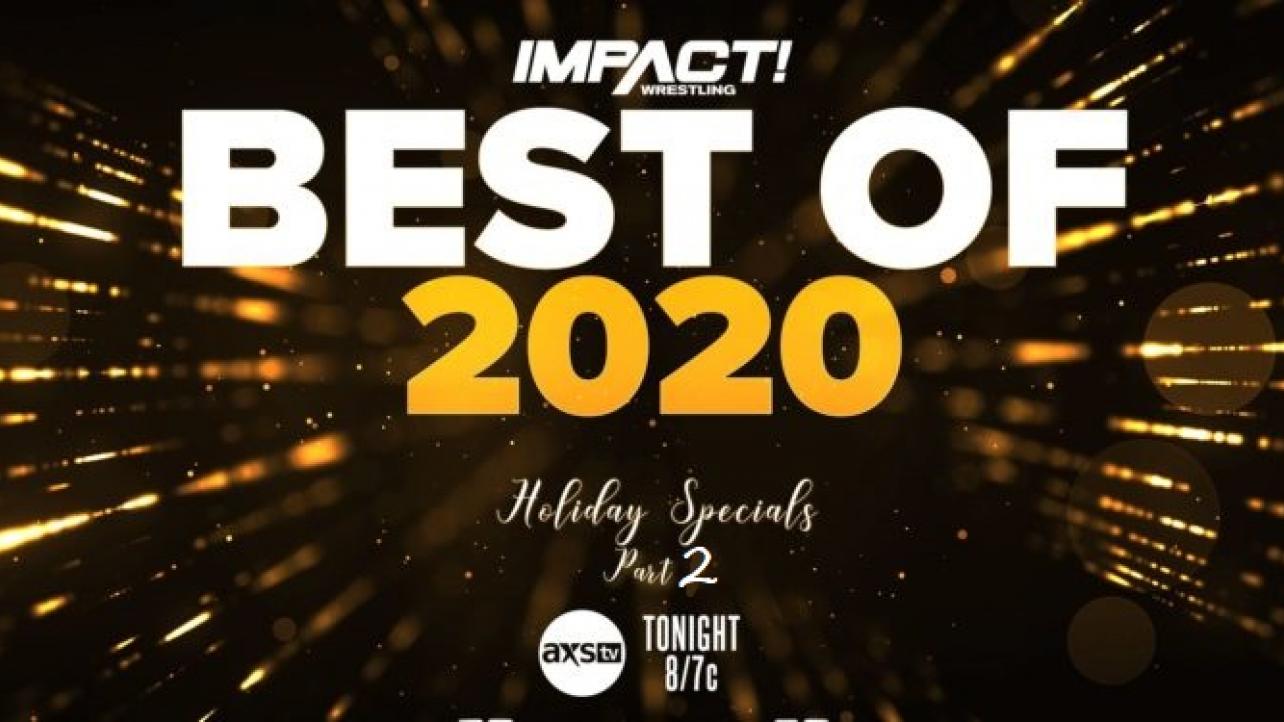 Welcome to eWrestling.com’s LIVE Results for the December 29, 2020 edition of Impact Wrestling “Best of 2020 – Part Two” which will be the last episode of 2020! Tonight’s episode of IMPACT Wrestling airs live from the Skyway Studio in Nashville, Tennessee starting at 8:00 p.m. Eastern Time (7:00 p.m. Central Time) on AXS TV!

Featured below are complete results of the December 29, 2020 edition of IMPACT Wrestling! The following report was written by eWrestling.com’s longest running female reporter, Jamie Rush. Follow Jamie on Twitter @JamieRush312.

The Impact opening credits end as we head into the Impact Wrestling “Best of 2020 – Part Two” episode on Twitch and AXS TC. Scott D’Amore and Josh Matthews sit in front of a Christmas tree with decorations around them as they sit by a fire. D’Amore jokes that Matthews got coal for Christmas.

They then move on to discuss upcoming events such as Hard To Kill on Saturday Jan. 16th where AEW World Champion Kenny Omega is set to challenge the Impact World Tag-Team Champions The Good Brothers. Also set for Hard to Kill is Impact World Champion Rich Swann vs. Motor City Machine Guns, all that and more in January! Matthews sends us into a video package as he says the entire show, could be considered the “Moment of the Year”, Slammiversary.

We then look back at The Moment of The Year, Slammiversary. The Motor City Machine Guns return to Impact during the event and we see as they leave Slammiversary victorious. Next the surprise appearance as Raju Rohit is dropped in the center of the ring. The former X-Division Champion Rich Swann off of crutches and also Erick Young’s return as well as elimination. The Good Brothers leave their “impact” on Slammiversary as well.

Back in the studio, Scott told Josh his resolution is to be nice to him… Not! And Josh pointed out that was Scott’s resolution last year.

Next we head into a video package highlighting the 2020’s Rebellion match between Willie Mack vs. Ace Austin To end the match, Mack climbs to the top rope. Austin rolls away. Mack instead flies across the ring with a Coast-to-Coast. Mack heads to the top again. He flops down with what would have been a six-star frog splash, but Austin moves out of the way in time. Austin turns Mack around and goes for a pin. The referee notices Austin put his feet up on the middle rope and stops the count. Austin and Mack meet at the second and top rope. Austin slips under. Mack flies high and on top of Austin with the six-star frog splash. Mack covers right away, and becomes the new X-Division Champion!

As the match ends, it was a great back and forth between the pair as they showed their best stuff as Willie Mack claimed the victory to win his first X-Division Championship.

We returned to Tasha Steelz and Kiera Hogan saying their New Year’s resolution is to have the Knockouts Tag Team Championship around their waists.

After a back and forth between Josh and Scott about previous Knockouts tag teams, they talked about Taya Valkyrie and Deonna Purrazzo.
Purrazzo Responds To Valkyrie

Next we head to Deonna Purrazzo who is standing in wait as she finally gave her response to Taya Valkyrie’s challenge for the Knockouts Championship. Purrazzo states that though she doesn’t bother with peasants…. there’s something about the match that interests her. Hmmmm… After that, she said that if she can go toe to toe with Valkyrie, it’s because she’s laying the foundation to what she’s building.

And if she can beat Valkyrie, she can be the longest reigning champion. She then accepted to face Valkyrie at Hard To Kill.

We take a look at Rich Swann’s rollercoaster of a year in 2020, but he then added his resolution for 2021 is to help bring Impact to the highest level.

Once again, we are welcomed back by Josh and Scott. They then begin to share previews of some of the matches for next week’s Impact Wrestling.

They talked about Rich Swann’s 2020 struggles starting with a severe injury in January and how it nearly ended his career.

Swann talked about how he managed to come back to wrestle at Slammiversary, but Eric Young’s jealousy and hate ruined it so he retired.

Young’s attacked on the stage afterwards ignited a fire in Swann to work harder and come back and face Eric Young to prove himself and win the Impact World Championship against the man the injured him.

Jordynn Grace said her resolution is to respond to people on Twitter less. Given social media, this isn’t the worse idea as a few can ruin it for everyone.

We head back to Josh and Scott who are in conversation about talked about the Motor City Machine Guns and what they mean to wrestling.

This match was on Impact Wrestling after they arrived at Slammiversary, and it was one of the best matches of the year as the two best tag teams faced off.

Back Inside The Studio

In the studio, Scott described how the North is like FTR as a throwback team, and their style with the MCMG’s rapid fire style made for a great combination.

As Josh and Scott pointed out, Swinger may be a little crazy, and he may be stuck in a time warp, but at least he didn’t shoot anyone!

He said he figured Steve would’ve heard or smelled something, but Steve said the trail doesn’t end with him.

He said besides the gun going off, he heard a skull butt and it came from the groom’s side and he pointed Romero toward Swinger as someone to interview.

Scott then said one of the unique challenges of 2020 was thinking outside the box, and Wrestle House was one of those and it was a hit and was never done.

We then got to see a highlight of one of our favorite bits all year. This was hilarious and awesome at the same time.

Afterwards, Josh asked Scott how they can get on Wrestle House, and Scott told him they all took a vote and Josh can be in a house away from all of them.

Josh and Scott welcomed us back and talked about the X-Division title match between Manik (c) vs. Rohit Raju vs. Chris Bey at Hard To Kill.

Scott talked about how Rohit wiggled out of his matches to stay champion, and it took us to Final Resolution.

Back To The Fireplace

Back in the set, Josh started to say how Manik looks like TJP, but Scott cut him off, saying he even has a passport with Manik on it.

Brian Myers said he doesn’t make resolutions because he believes everyone should always be the best them 24/7 like he is.

Josh and Scott talked about Ken Shamrock’s Hall of Fame induction and the accolades toward Shamrock from Bret Hart, The Rock, and Mick Foley.

Scott added how Shamrock was the first Impact era champion, and then we were treated to Ken Shamrock’s HOF speech.

This was a great moment because, as Scott had said, The Rock inducted Shamrock into the HOF and explained how Shamrock took a position where he didn’t have a problem working with the Rock.

He could’ve said no, but he didn’t when a lot of guys did that to the Rock.

It was a glimpse into Shamrock’s heart and what it means to be a good person and a professional.

Scott then added how that was an emotional day for Shamrock as professional wrestling was his first love and he takes it very seriously.

Ken Shamrock’s Impact Wrestling’s Hall of Fame Induction
Brian Myers said he doesn’t make resolutions because he believes everyone should always be the best them 24/7 like he is.

Josh and Scott talked about Ken Shamrock’s Hall of Fame induction and the accolades toward Shamrock from Bret Hart, The Rock, and Mick Foley.

Scott added how Shamrock was the first Impact era champion, and then we were treated to Ken Shamrock’s HOF speech.

This was a great moment because, as Scott had said, The Rock inducted Shamrock into the HOF and explained how Shamrock took a position where he didn’t have a problem working with the Rock.

He could’ve said no, but he didn’t when a lot of guys did that to the Rock.

It was a glimpse into Shamrock’s heart and what it means to be a good person and a professional.

Scott then added how that was an emotional day for Shamrock as professional wrestling was his first love and he takes it very seriously.

Match of the Year – Slamiversary

Eddie Edwards said his New Year’s resolution is to continue moving forward to provide for his family and the Impact Wrestling company.

He prefers setting goals instead of making resolutions, and that’s a great way to look at it.

Scott talked about there being so many matches, and Josh announced it’s the Elimination match at Slammiversay when Eric Young returned and Swann’s story started.

This was such an awesome match for so many reasons from the storyline perspective and the athleticism of the participants to the in-ring story.

Add to the mix that it was for the vacated World Championship only gives it more weight.

While Eddie Edwards has his detractors, he deserved to win this and have another run as champion, and he did a great job.

Edwards then thanked the fans for voting for the match, and he said it was very special to him.

He thanked everyone for their contribution and he considered it an honor given the high level matches they put on every week.

Josh and Scott then wished us all a Happy New Year and thanked us for watching.

This was a fun show as we got to see matches we haven’t seen for a while and we like the two winners.

Impact Wrestling Live Results can’t wait to see what 2021 has to offer, and we want to thank you for joining us. We had a blast and look forward to seeing you all next week.