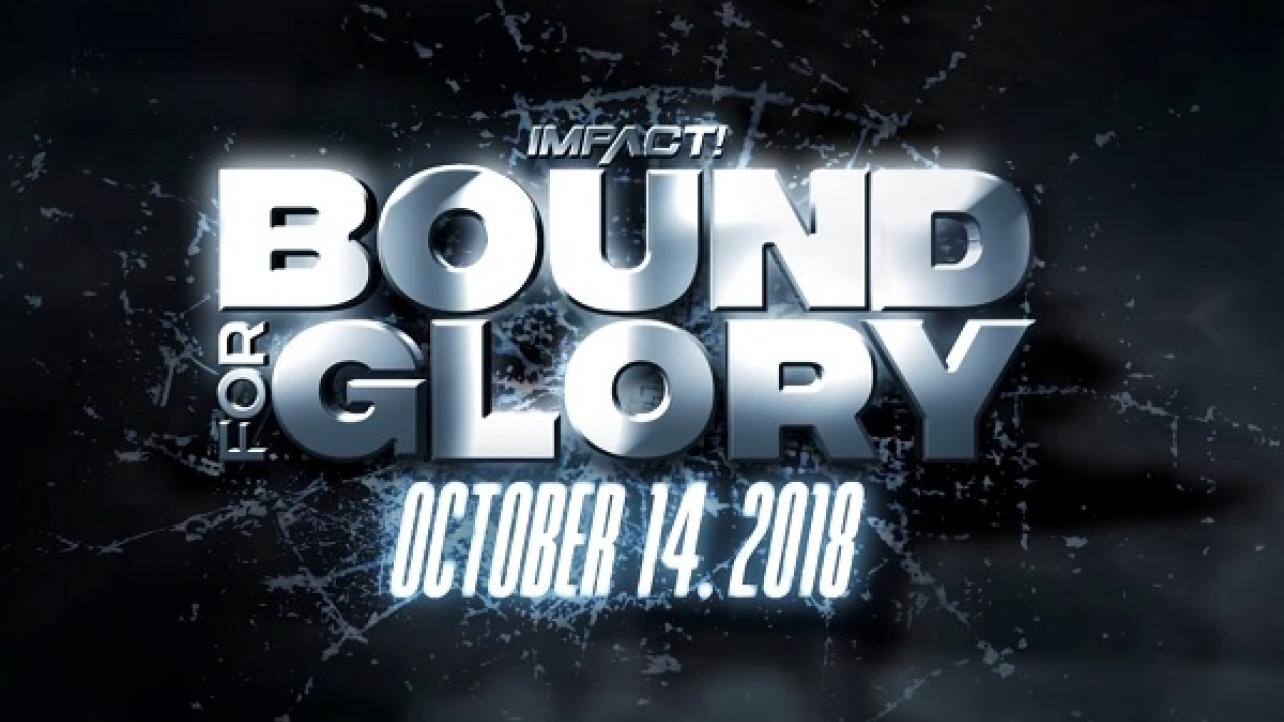 Impact Wrestling returns to the pay-per-view arena this evening, as they present their biggest annual event — Bound For Glory 2018. The PPV goes down tonight from the Melrose Ballroom in New York, New York, and eWrestling.com has you covered!

The cold open video package for tonight’s PPV airs and the show is off and running. We shoot inside the Melrose Ballroom where Josh Mathews and Don Callis welcome us on commentary. We head to the ring for our first match of the evening.

Tag-team action kicks off the Bound For Glory PPV, as the team of Rich Swann and Willie Mack take on the duo of Matt Sydal and Ethan Page in our first bout inside the ring.

The crowd chants “Return of the Mack” for Willie Mack before things get going. Swann hits a big enziguri on Sydal early on. Sydal talks some smack but Swann just ignores him and tags in Mack. Mack drops Sydal with a shoulder block. Swann is back in and now Page is tagged in as well. The fans boo.

The finish in this one saw Swann hit a springboard cutter on Sydal and then follow up with a Phoenix splash for the pin and the win for his team.

It’s now time for Eli Drake’s open challenge to anyone in New York. He comes out and insults the New York Giants and asks how the 1-5 record is treating NFL fans in the area this year. From there, James Ellsworth comes out, just as our boy Rajah reported would happen earlier today!

The fans chant “delete” at him. Drake said to the fans, “Wrong guy!” Drake said he wasn’t from New York. Ellsworth said he once dated a girl from Staten Island and lived in her basement. Ellsworth tries kissing up to the New York fans but they respond by chanting “F**k You Ellsworth!”

From there, it was time for the two to get down to business. The fans are clearly behind Drake in this one. The segment didn’t seem to go as those who produced it may have anticipated. Anyways, the match didn’t last long as two Gravy Trains got Drake the win.

The Impact Wrestling Knockouts Championship is on-the-line next, as Tessa Blanchard defends against Taya Valkyrie in our next match of the evening here at Bound For Glory.

This was a pretty good match. Taya used the Road to Valhalla but the referee was distracted by Blanchard pulling the apron dressing into the ring. Blanchard used the hammerlock DDT but Taya kicked out. They traded near falls ending when Blanchard flew off the top rope two-thirds of the way across the ring into a codebreaker for the finish.

In one-on-one competition, Eddie Edwards and Moose will collide inside the squared circle in our next bout here inside the Melrose Ballroom in New York.

Moose was accompanied to the ring by three women. Two of the women held the ropes open for him and they all kissed him on the cheek. Moose’s ladies left. Edwards came out with a kendo stick. Killer Kross grabbed Edwards from the crowd.

In the ring, Kross held Edwards for a weak kick from Moose. Tommy Dreamer came out and cleared the heels from the ring with a kendo stick. Dreamer cut a promo playing to the NYC crowd and apparently making it a tag team match.

In tag-team action, Edwards joins Tommy Dreamer and Moose joins Killer Kross. This tag-team bout is up next. Well, it ended up being more of an all-out brawl than a bout.

Crowd was into this one. Jylen Ware of the New York Giants was at ringside shoved Moose at one point. The cameras missed that and also missed Edwards giving Moose a belly-to-belly overhead on the floor. Edwards pinned Moose with a schoolboy. The heels beat them down after the match. They gave Edwards a double-team hard power bomb into the ring frame. This was more brutal than most power bombs on the apron.

The OVE Rules match with Sami Callihan and Dave & Jake Crist against Pentagon Jr., Fenix and Brian Cage is up next.

This one featured a big surprise finish as Callihan pinned Cage after a piledriver. All three gave Cage a ton of superkicks one after the other This is the first time Cage has lost a fall in Impact. Match was all action but a few of the spots wre off. There were some ceazy spots including Fenix running down the ramp jumping over the top rope and hitting a cutter. Callihan piledriver Pentagon on the apron. The building doesn’t allow for spectacular dives so we didn’t get any of that.

Austin Aries interview. He said when he came here the place was on life support and he built the reputation of the company and make the title mean something again. Johnny Impact showed up, while I’m putitng in the work, you do a reality show, nurse injuries and get married. Aries said he doesn’t trust Impact and he doesn’t trust management. Said he was bringing Moose and Kross out and he wants Taya at ringside to see when he exposes Impact.

The Concrete Jungle Match with Ortiz and Santana vs. The King & Homicide & Hernandez is up next.

The ring canvas and pads were pulled, so the ring had ropes and only wood. LAX was played to the ring by rappers. There were no turnbuckle pads and tables were leaned up against the ring posts. Hernandez bled early. There was nothing holding the boards in place so footing was horrible and here were gaps between the boards at times. A couple of the tables were brought into the ring and set up in the corners. Hernandez picked up Homicide and gave him a Border Toss onto Santana and Ortiz at ringside. Hernandez performed a shoulder block that drove Ortiz through one of the tables. Santana performed a flip dive (there actually is enough room on the hard camera side). Santana worked over King and said he’d kill “this motherf—er.”

King was working over Ortiz when the LAX music payed. Konnan came to the ring and hit King with a slapjack and eventually threw him through one of the tables in the corner. Homicide and Ortiz performed their double team blockbuster finisher for the victory.

Allie was shown entering a coffin with a hatchet in hand. She ended up in a hazy area where Father Jim Mitchell welcomed her. Mitchell reminded her that her soul remains in the undead realm and then let out his sinister laugh. Allie walked into a less hazy area and up a flight of stairs where Su Yung attacked her. Allie hit her with the hatchet. Allie hit her again and blood went flying. They cut to the next scene where she did the same thing to Yung. Only this time, Allie saw her own face like she’s Luke Skywalker or something.

Allie found Kiera Hogan in a casket. Young showed up with an axe or something. She ended up hitting Allie with a baseball bat. She wanted to use the hatchet as a weapon. Allie blocked it, so Yung gave her a mandible claw. Yung wound up to stab Allie with a knife, but Allie drove a weapon into her neck. Allie woke up Hogan and got her out of the casket. They tried to leave through the first casket. Mitchell showed up and revealed it was a word game in that he said she could find her friend, but she never said they could leave. Young’s undead bridesmaids showed up. Rosemary appeared and fought off the bridesmaids. Allie and Hogan ended up in the casket. Yung and Rosemary have special effect hand powers. Yung’s are stronger and Rosemary was overpowered. Allie and Hogan returned to the regular world. Allie’s voice turned demonic as she told Hogan it’s not okay.

Our main event with the Impact Wrestling World Championship is up next here at Bound For Glory 2018, as Austin Aries meets Johnny Impact in our final bout of the evening.

As expected, this one was an excellent contest from bell-to-bell and had the fans on their feet inside the Melrose Ballroom throughout the duration of the match, which was given some time. In the end, a new champion was crowned as the finish saw Johnny Impact win with a Brainbuster and Starship Pain.

Aries got right up and walked out afterwards. Right before the finish Aries gave Taya Valkyrie a Tope. Impact used Starship Pain earlier but Aries got his foot on the ropes. Aries hit the brainbuster but Impact mae the ropes. They used a ton of big moves. Great match and great effort from both guys. This was a pretty good show, especially in terms of in-ring action.