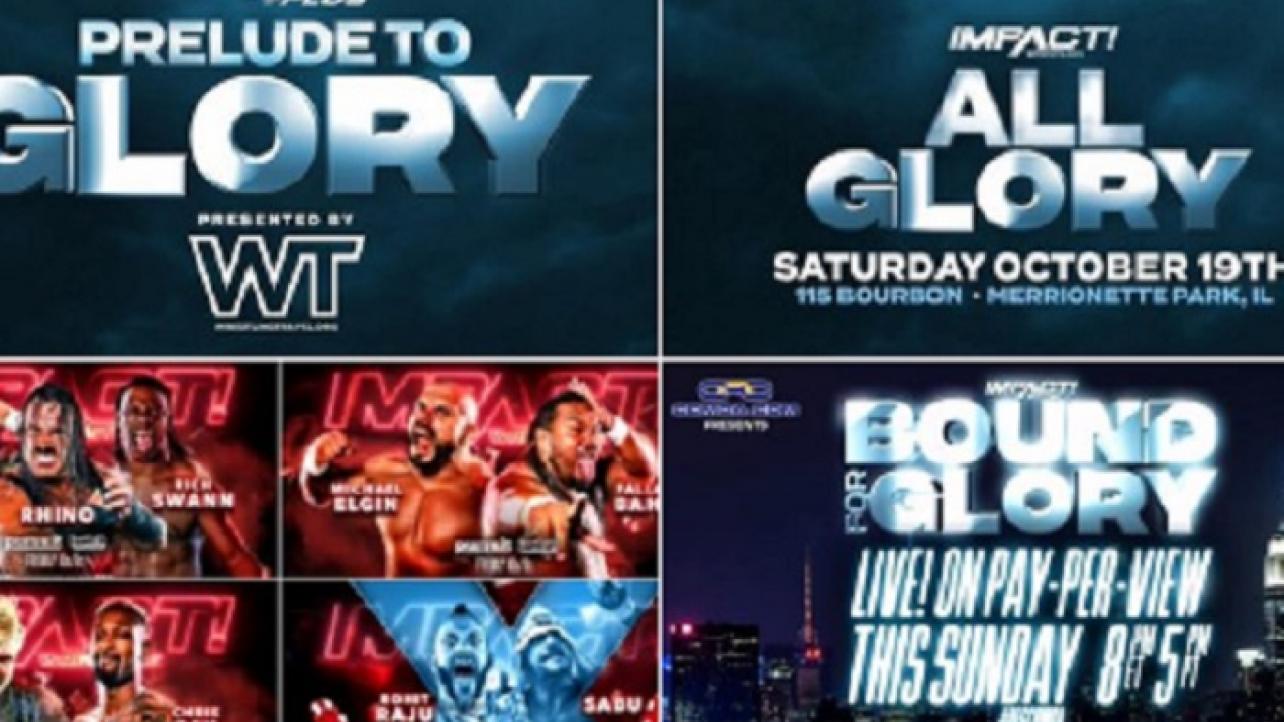 To say it is a big weekend for IMPACT Wrestling would be an understatement, as the promotion tries to elbow its’ way into the big picture discussion in the current North American pro wrestling scene with a new episode of TV tonight and live specials on IMPACT+, Twitch and pay-per-view in the next three days.

IMPACT Wrestling returns on Pursuit and Twitch tonight, kicking off a three-day stretch of events that includes their regular weekly TV show, the “Prelude to Glory” live special on IMPACT+, an “All Glory” live special event streaming for free via Twitch and finally, their annual “Bound For Glory” pay-per-view event.

Things kick off with two shows tonight, as the regular weekly episode of IMPACT Wrestling TV airs tonight, as does their special “Prelude to Glory” event streaming live on IMPACT+ from South Bend, Indiana.

The official preview for the “Prelude to Glory” special reads as follows:

Prelude to Glory Tonight on IMPACT+

Tonight on IMPACT+ at 7PM ET IMPACT Wrestling gets the Bound For Glory weekend started with Prelude to Glory Presented by Wrestling Travel. It all goes down in South Bend, IN with tickets still available. Get them HERE.

Check out some of the amazing matches that will go down tonight! Don’t miss Prelude to Glory LIVE tonight at 7PM ET with a Pre-Show at 6:30 all on IMPACT+ LIVE!

The official preview for tonight’s edition of IMPACT Wrestling on Pursuit and Twitch reads as follows:

Tonight on IMPACT Wrestling there will be triple Bound For Glory implications when Josh Alexander steps into the ring with Rhino and Rich Swann. For Rhino and Swann it is a scouting opportunity and for Alexander it is a chance to find a weakness in his opponents. Because on Sunday at Bound For Glory, each man will be joined by his partner with the World Tag Team Titles on the line LIVE on Pay Per View.

Before we get to Sunday, what is going to happen tonight? Don’t miss this triple threat match as it will lead to momentum for one team on Sunday with the World Tag Team Titles hanging in the balance.

Jake Crist vs. Chris Bey goes down tonight and this is the last stop for Jake Crist before he gets to Bound For Glory on Sunday.

Can Jake escape the talented Chris Bey and make it to Chicago unscathed? Jake has a huge championship defense waiting him and 4 opponents who want his title!

Michael Elgin vs. Fallah Bahh goes down tonight in a heavyweight collision. This match takes place just 2 days before Elgin faces Marufuji at Bound For Glory. Can Elgin make it to Chicago unscathed? Can Fallah Bahh figure out a way to defeat Unbreakable?

Who will be the final entrant in the X-Division Ladder Match at Bound For Glory? Will it be Rohit Raju vs. Sabut with the winner going to Chicago.

.@TheSamiCallihan delivers one final message before challenging @MrGMSI_BCage for the World Championship this Sunday at Bound for Glory. #BFG

What else will unfold TONIGHT on #IMPACT? pic.twitter.com/9QW7JqBYJv

Bound for Glory weekend kicks off TONIGHT with a double dose of action. Here we go! #BFG #PreludeToGlory #IMPACT pic.twitter.com/5CpUE4HUpZ

Plus more on the final #IMPACT before #BFG! pic.twitter.com/DT39wLdcBP

On Saturday night, IMPACT Wrestling presents their “All Glory” live special streaming for free via their official Twitch channel.

The show goes down from 115 Bourbon Street in Merrionette Park, Illinois and features talent from the Warrior Wrestling and Zelo Pro Wrestling independent pro wrestling promotions from the U.S. Midwest scene.

The official preview for the “All Glory” special reads as follows:

This year’s Bound For Glory is scheduled to emanate from The Odeum Expo Center in Villa Park, Illinois. Featured below is the current advertised lineup heading into Sunday’s big PPV event:

Make sure to visit eWrestling.com on 10/20 for complete IMPACT Wrestling Bound For Glory 2019 Results!