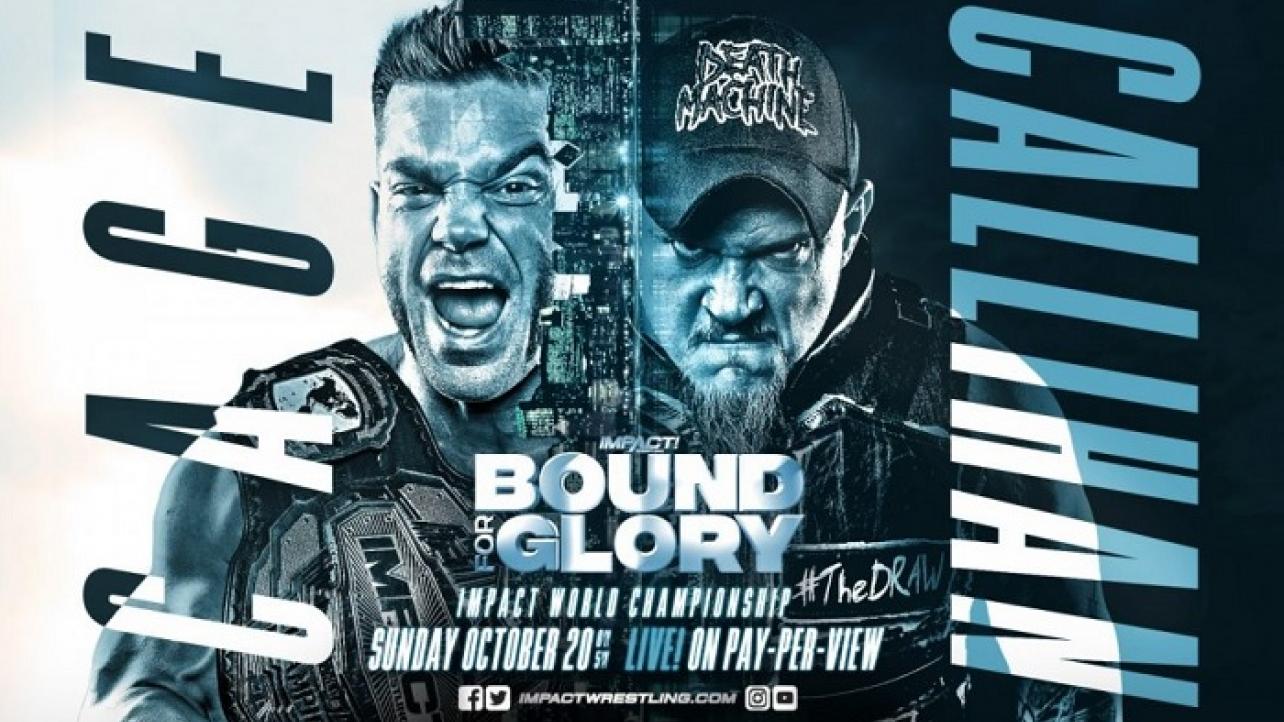 IMPACT Wrestling closes out a busy weekend of events with the biggest event on their annual calendar going down this evening, as they present their Bound For Glory 2019 pay-per-view from The Odeum Expo Center in Villa Park, Illinois.

We will be providing live play-by-play results coverage of the show as it happens from start-to-finish right here on this page. Make sure to refresh this page often to view the latest IMPACT Wrestling Bound For Glory Results.

Raju was eliminated by Jake Deaner.

“No signal from venue” causes confusion early on in the match for fans only for a short period. As the action comes back, everyone is attacking each other, people are eliminated when they go over the top rope and both feet hit the floor.

Excitement from fans as Ryan enters the gauntlet match. Ryan is successful in eliminating Jake Deaner and Rohit Raju.

As Havoc enters the gauntlet match, she zones in on Joey Ryan. Ryan is chokeslammed to the mat by Havoc who then takes out the remaining contenders.

Rosemary teams up with Havoc to eliminate Joey Ryan who was gesturing inappropriately.

Fulton comes into the ring on a mission, eliminating Rosemary and Havoc at the same time while taking down every man in the ring. Fulton then elimates Thonstowe and Joey Ryan.

Swinger stayed outside of the ring showboating and playing off the fans.

Grace gets a German Suplex on Madman Fulton.

Making his Impact return, Swoggle comes out from beneath the ring, zoning in on Swinger and begins to chase him.

Shera takes down Sabu, Bahh, and Eddie rather quickly as he enters the ring. Jordynn saves Rae from a Chokeslam attempt by Shera. Though they attempted to counter with a suplex, he ultimately blocks and eliminates both women.

Last three men in the ring are Fulton, Shera, and Eddie. Fulton and Shera face off, with Fulton attempting to throw Eddie at Shera. Fulton gets Shera on the ropes when all of a sudden Eddie catches Fulton with a clothesline, eliminating him. Fulton pulls Eddie under the ropes and his an Apron Bomb in retaliation.

Shera and Eddie are the remaining two as Eddie performs a Boston Kneww Party on Shera for the 3-count win.

Tenille Dashwood is caught off guard with an attack by Taya Valkyrie before the match official begins. Dashwood kicks Valkyrie in the face, followed by a forearm smash and a Butterfly Suplex with Valkyrie kicking out at two. More back and forth between the two until Dashwood is able to get Valkyrie caught up in the ropes, going for and landing The Draping Neck Breaker. Valkyrie is saved by Bravo as she is pulled out of the way. Valkyrie begins to dominate the match, until Dashwood is able to block the SuperPlex Valkyrie was going for. Dashwood retaliates with a Head Butt and a Power Bomb. Once again Dashwood and Valkyrie are trading shots back and forth. Dashwood goes for The Spotlight, though Valkyrie is able to counter with a High Knee Lift and The Road to Valhalla for the win.

Early on in the match Swann gets tossed by Page who had just recovered from the 619 by Willie Mack. Rhino tags himself in but is distracted and is knocked down by Page. Alexander makes the tag and immediately tries to attack Rhino. RVD tags in and goes crazy with rolling thunder hits, a moonsault, and a cover attempt to no avail. Alexander hits a blue thunder bomb for another two count. Swan finally hits a DDT on Page. Mack tags in hitting several moves including a Senton Cannonball on Alexander and a Standing Moonsault on Page. Page takes a Spinning Heel Kick from RVD who then attempts a Five Star Frog Splash, though fails as Alexander grabs his ankle. Swann dives in with a Frog Splash of his own for the two count. RVD remains on the top rope through this and finally hits a Leg Kick to Swann. Alexander attacks RVD but is quickly tossed from the ring as he is clotheslined by Rhino. Mack hits a Flipping Senton over the top rope, landing on all three of the men in the ring. More back and forth between Swann and Page, then Alexander and Swann. RVD Superkicks Rhino in the face. Crowd boos. RVD then Superkicks Mack and lands a Spinning Heel Kick on Swann. Swann is taken down with a Burning Hammer/SpineBuster Combination for the three count pinfall by The North.

Winners: The North (via pinfall)

Both men waste no time as the match is ver fast paced from the moment the bell rang. Marufuji makes his way to the outside of the ring to avoid Elgin who just Suicide Dives onto Marufuji on the floor. Both men back in the ring where there is a cover and a two count. In center ring chops begin to be thrown back and forth between the two. Elgin and Marufuji end up on the outside of the ring once again, only to have a nearfall when Marufuji makes a sneak pin on Elgin. Elgin successfully performs a Backbreaker into Falcon Arrow for the two count. Elgin once again musters up what he can with a Superkick after a Knee Strike. Elgin tries to drop on Marufuji, but only gets a kick to the face and falls to the floor. Crowd chanting “this is awesome” at this point. Both men back in the ring after the ref started a ten-count, of which Elgin didn’t make it back in until nine. Both men keep kicking out after several amazing moves and two count pin attempts. Elgin gets Marufuji with the Burning Hammer for the three count pinfall victory.

Jake Crist vs. Tessa Blanchard vs. Ace Austin vs. Daga vs Ace Romero

Lots of back and forth between the contenders early on as things get started in this match up. Daga and Blanchard crack Romero with a ladder in a failed suicide dive attempt. Crist recovers from being shoved into the corner with a ladder and is able to drop Romero as he begins the climb. Austin then begins to climb only to hit a Back Suplex. Austin and Blanchard are exchanging blows as Blanchard hits a Springboard DropKick on Austin sending him outside of the ring. Blanchard climbs up the ladder but Romero pulls her off. Austin attempts to go up but Blanchard swats at him, going up instead. Daga not far behind. Back and forth between Austin and Romero, Crist joining in eventually to hit a Super Cutter on Romero. Later Romero sets up a ladder, though Blanchard pushes it over with Romero crashing through the table and straight to the floor. Blanchard attempts to grab another ladder and Crist tries to stop her. Before she can try anything, Fulton comes out and throws her to the corner. Fulton then grabs a table and puts it in the ring. Blanchard now on the top rope ends drops a Hurricanrana on Crist into the ladder. She then climbs the ladder, but Crist is right across from her on the other side of the ladder. Blanchard throws Crist through the table Fulton had just put up. Out of nowhere Austin jumps to the ladder with his baton and hits Blanchard who falls from the ladder. Austin climbs to the top, grabbing the title for the win.

As the bell is about to ring, Shamrock is already head to head with Moose to start this match up. The bell rings and the match begins with back and forth strikes out of the gate. Moose is being worked to the mat by Shamrock who attempts an Armbar. Moose is able to block the move, so Shamrock switches to an ankle lock. Moose breaks the hold by grabbing the bottom rope that was just in reach. More back and forth between the two who are still trading shots out on the floor following Shamrock’s leap over the top rope taking down Moose. Shamrock is finally able to lock in his submission move on the floor, but it doesn’t count. The ref tells him he needs to get back in the ring. Moose and Shamrock make their way back to the ring where Moose slams Shamrock into the ring post. Both men make their way back into the ring, only to have Shamrock slingshot himself over the top rope once again onto Moose. Trigg grabs Shamrock’s ankle, then Moose chops Shamrock’s leg from beneath him. Trigg takes off the top turnbuckle. Moose tries to slam Shamrock face first into the exposed turnbuckle, then Shamrock tries the same on Moose, both to no avail. Referee ends up down and as Shamrock checks on him, Moose hits Shamrock. Trigg throws a chair into the ring and Moose tries to hit Shamrock in the face with the chair, but misses. Shamrock gets another ankle lock as Moose tries to grab the referee, who now moves. Trigg gets in the ring where Shamrock knocks him down. Shamrock counters a Moonsault attempt by Moose with yet another Ankle Lock by Shamrock. Moose lands a spear on Shamrock for the three count cover.

Callihan and Cage quickly begin to strike one another, oddly Cage bites Callihan in his already busted open face. Cage follows up with scraping Callihan across his forehead. Callihan still on the outside of the ring Cage flips over the top rope onto Callihan. Cage’s lip begins to bleed as Callihan continuously works Cage with a chair. Both men work some action on the outside of the ring with a chair and later a table. Cage then sets up more chairs and sets up a bridge of sorts. Cage goes for a PowerBomb on Callihan who quickly counters with a groin claw. Callihan follows up with a Pile Driver. Callihan hits Cage a few more times with the chair on the outside of the ring before throwing him back in. Both men begin to exchange blows center ring. Failed pin attempts by both men. Power moves by both, Callihan gets Power Bombed and Cage gets the pin and three count for the win!

As the show comes to an end, Melissa Santos is seen making her way to the ring to celebrate with Brian Cage. As he celebrates, Cage hoists Santos onto his shoulder in the center of the ring to close the show.