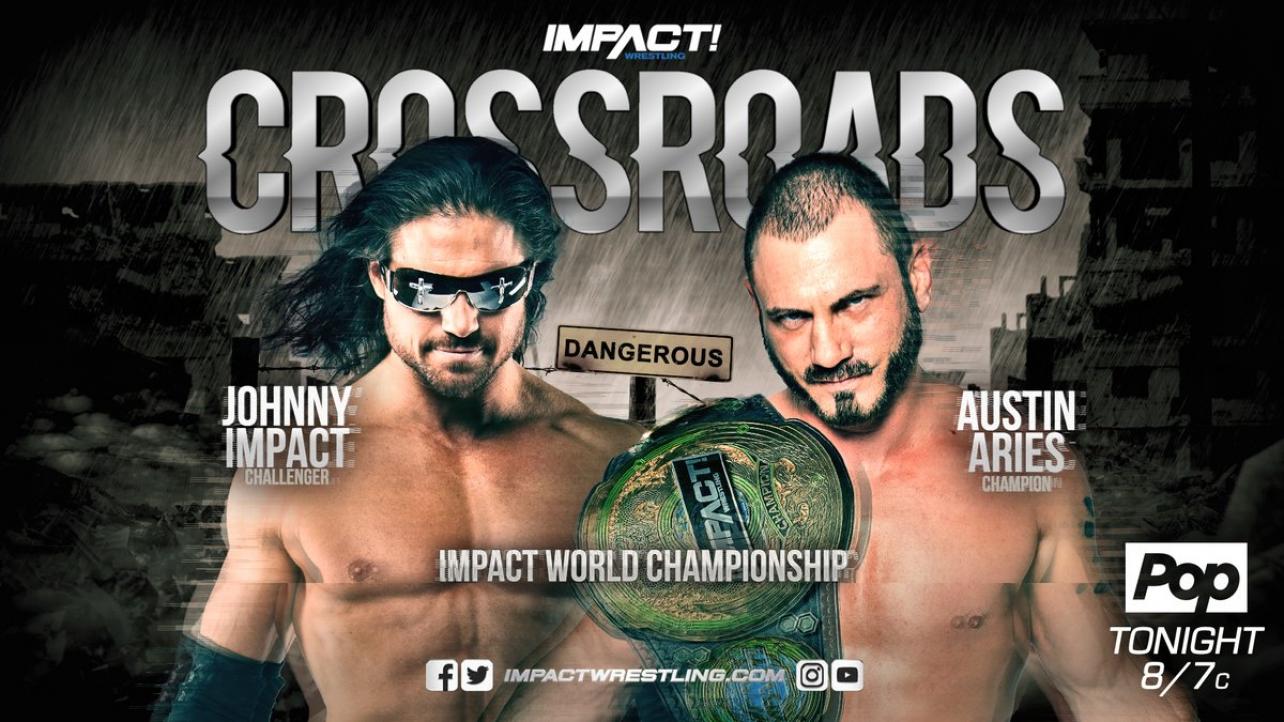 Impact Wrestling held their “Crossroads” themed special edition of the show on Pop TV this week. Featured below, courtesy of F4WOnline.com, are complete results from the show.

Konnan distracted the heels and LAX attacked from behind. They brawled around ringside for several minutes before the bell rang. Santana executed a senton off of Ortiz’s shoulders and followed with a Lionsault/legdrop combination. During the break, the heels took over and isolated Santana in their corner. Ortiz got the hot tag and ran wild. Konnan pulled Lee off the apron and LAX hit the Street Sweeper on Konley for the win.

Brown was firmly in control and worked over Cage’s ribs. Cage made a brief comeback but Brown press slammed him onto the turnbuckle. Cage countered an Alpha Bomb attempt into the Un-prettier for the win.

Ishimori was briefly in control until Sydal took over and worked on the leg. Ishimori made a fiery comeback and scored a near fall after a double foot stomp. Ishimori hit the golden moonsault to the floor and hit a running step-up hurricanrana on the ramp. Sydal attempted the Shooting Star Press but Ishimori moved and hit the tombstone into the knees. Ishimori went for the 450 but Sydal got the knees up and hit the Shooting Star Press to win the X Division Championship.

They brawled on the ramp to start the match. Ness sent Allie into the ring post to take over. Allie made a brief comeback and nailed Ness with an elbow on the floor, but Ness regained control when she nailed Allie with the Un-Prettier on the floor. Ness tried to hit Allie with the belt but she ducked and hit the Allie Valley Driver. Allie then hit the superkick to win the Knockouts Championship.

In the back, Gail Kim congratulated an emotional Allie on her championship victory.

– A recap aired of Sami Callahan injuring Eddie Edwards last week. They showed the bat shot several times from different angles. Edwards was shown backstage with an ice pack over his bloody eye as he went to the hospital.

Lashley is on his own because his partner Edwards is out due to the injury. Callahan hit Lashley’s leg with the bat to give OVE the advantage. Callahan continued to interfere throughout the match. Lashley made a comeback and gave Jake a belly-to-belly suplex into Dave in the corner. Brian Cage came down and tagged himself in. He dominated OVE and hit the Drill Claw on Jake for the win. Callahan tired to hit Cage with the bat, but Lashley took him out with a spear.

After the match, Lashley offered his hand for a handshake but Cage refused and walked away.

Aries was in control until he missed a forearm and hit the post. Impact took over and wore down Aries. He went for a springboard but Aries grabbed the legs and Impact took a nasty fall to the floor. Impact made a comeback and hit a springboard enziguri for a near fall. He hit a standing moonsault for another near fall. Aries countered into the Last Chancery. Impact made another comeback and hit a Spanish Fly for a two count.

They traded stiff shots on the apron until Aries nailed Impact with a Death Valley Driver on the apron. Aries hit the running drop kick in the corner and the Brain Buster for the win.

Alberto El Patron came out on the ramp and applauded Aries.