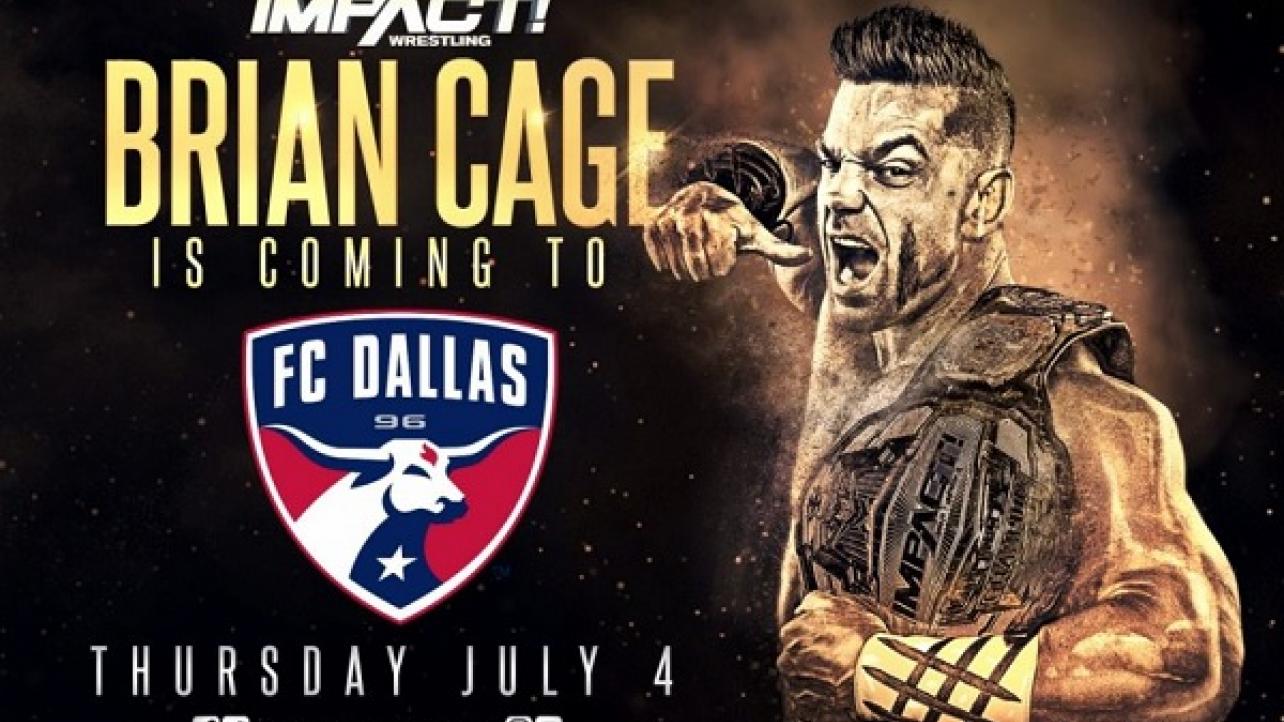 With only a couple of weeks remaining before Impact Wrestling’s Slammiversary XVII pay-per-view at Gilley’s Dallas in Dallas, Texas, the promotion is pulling out all of the stops.

This week, the company announced a new partnership with Major League Soccer (MLS) team FC Dallas that will see Impact Wrestling involved in a series of promotions and events leading up to their own Slammiversary XVII event on July 7th.

DALLAS – IMPACT Wrestling is teaming up with FC Dallas for a series of promotions and events leading up to Slammiversary XVII, which will be held Sunday night, July 7, at Gilley’s Dallas.

IMPACT World Champion Brian Cage will attend the team’s home match on Thursday, July 4, at Toyota Stadium in suburban Frisco, Texas, just outside of Dallas. Cage will cheer on the host club in its match that night against D.C. United, which is expected to draw about 20,000 fans for the holiday night match.

Cage will be interviewed at the game by Gina Miller, who is the VP of Media & Communications for FC Dallas and has hosted/produced FC Dallas Live, a pre-game show that airs on TXA21. Miller is an award-winning sportscaster who has worked in numerous markets, including Dallas and Los Angeles.

“We’re thrilled Brian will be at the July 4th game and is bringing the World Championship belt with him,” said Miller. “It will be great to see the title up-close and in-person.”

Cage also will be participating in a special halftime promotion, where he will attempt to score a penalty kick – against the team’s mascot, a bull named Tex Hooper.

“I’m looking forward to going to the FC Dallas game on July 4th, cheering the team to victory and spending time with the strong fanbase, many of whom will be at Slammiversary on Sunday to root me on,” said Cage.

Cage also will participate in other in-stadium promotions with the team and meet with the players and coaches. In addition, he will meet with some of the soccer club’s youth teams.

About IMPACT Wrestling
IMPACT Wrestling is one of the world’s largest wrestling entertainment properties, creating more than 300 hours of original content annually across television and other digital platforms. IMPACT Wrestling specializes in creating premium content, events, products, merchandise and music, as well as the management and promotion of professional wrestlers. Its highly successful flagship, IMPACT!, is broadcast globally, including Fridays at 10 p.m. ET/PT on Pursuit Channel and Twitch in the United States, Fight Network and GameTV in Canada, Sony ESPN in India, 5STAR and Fight Network in the United Kingdom, SuperSport in Africa, and MVStv in Mexico. IMPACT Wrestling is a subsidiary of Anthem Sports & Entertainment Corp.