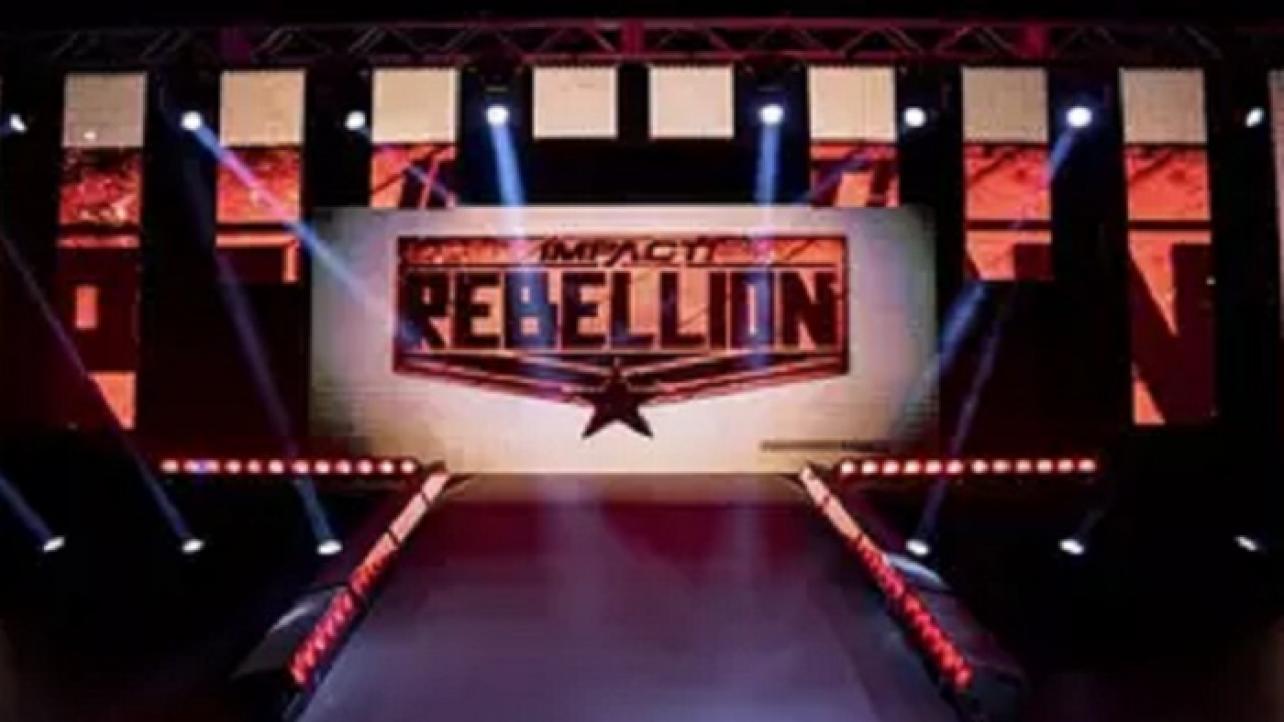 IMPACT Wrestling returned with night two of their “Rebellion” pay-per-view on Tuesday, April 28, 2020. Featured below are detailed results of the pay-per-view.

Josh Mathews and Madison Rayne were on commentary…

1. Suicide vs. Chris Bey vs. Rohit Raju vs. Trey Miguel. The match started off with choreographed waistlock antics. Bey ended the cuteness with a shotgun dropkick on Suicide. Rohit dumped Miguel outside. Bey and Raju bickered over who would put the boots to Suicide. Suicide tried to fend off Raju and Bey with boots but they tackled Suicide to the mat. Suicide escaped and locked Bey in an Octopus Hold. Suicide managed to lock Miguel in the same hold (Is this TJP playing the role again because that’s something he would do, though the body build looks different).

Miguel escaped and the wrestlers dumped Suicide outside. All three men traded strikes with Raju getting the upper hand. Raju hit both opponents with forearms. Rohit hit Bey with a sweep combination. He put Miguel on Bey and Rohit hit both opponents with a double stomp. Suicide hit Rohit with an Old School Armdrag. Miguel hit Suicide with a Scorpion Kick and neckbreaker, while Suicide gave Raju a DDT. Bey dumped Miguel outside with a huracanrana. Rohit tried to trick bey with a rollup, but Bey kicked out and gave Rohit a dropkick. Bey hit Rohit with a suicide dive.

Suicide hit the pile of people on the outside with a cannonball. Trey hit all his opponents with a step up flip dive. Miguel got a two count on Rohit. Miguel hit Bey with a stomp for a two count. Suicide blocked Miguel’s DDT. Madness ensued, leaving all four men on the mat. Raju hit bey with a CQC combo. Bey came back wiht a hook kick. Bey hit Raju with a release front suplex for a two count. Each man took each other down with running strikes. Miguel got a rollup on Rohit for a two count. Rohit hit Miguel with a Cross Rhodes and Front Suplex combo. Suicide tossed Bey.

Suicide hit Bey with a tilt-a-whirl back toss. Trey hit Suicide with Cheeky Nandos. He kicked Rohit into position. Miguel hit Rohit and Suicide with a Tiger Feint. Miguel hit Suicide with a top rope meteora. Rohit tossed Miguel away. Rohit tried to steal the pin but was kicked in the back of the head with a delayed roundhouse. Bey picked up the pinfall on Rohit.

The camera cut to Josh Mathews and Madison Rayne at the commentary table. Josh cut to a Rebellion Night I highlights. Josh noted that Jordynne Grace vs. Taya Valkyrie wasn’t happening and instead we were getting ..

Josh Mathews interviewed Tessa Blanchard via Skype. Tessa talked about being disappointed about not making it to Rebellion. Josh said he’s happy to see Tessa “staying safe” during this time. Josh asked Tessa about Elgin’s gripes about Tessa not defending the title. Tessa said Elgin can’t become champion unless he goes to Mexico. Tessa said “to be the man you have to beat the man, even if the man’s a woman”. Josh ended the interview and said we would find out Michael Elgin’s thoughts later in the show…

2. Joseph P Ryan vs. Cousin Jake. Josh noted that Cody is in isolation in Canada. Joey used the ropes to hide from Jake early on. Joey managed to land a few strikes on Jake, but Jake’s power made things easier for Jake to keep Joey on the mat. Jake manhandled Joey around the ring. Joey managed to sidestep Jake, sending Jake into the ringpost.

Joey hit Jake with a superkick combination for a two count. Rayne argued about Josh constantly talking about Joey’s penis gimmick. Joey Ryan rolled up Jake and got a hand on the ropes (barely) for the “cheap” win.

The show cut to Rosemary continuing to rant in the bar. She was talking to Taya Valkyrie via facetime and wondered why Taya wasn’t here. Rosemary also complained about having to wrestle in Full Metal Mayhem. Taya complained about being isolated and how her hair won’t curl. Taya, via facetime, continued to rant. Taya said Taya not being there is doing Rosemary a favor because Rosemary gets to wrestle Havok now. Rosemary tried to say that Taya should wrestle against Havok. Taya dodged the proposition. Taya said that after Rosemary wins, her and Rosemary can go to Vegas and take advantage of drunk individuals. Taya wished Rosemary good luck in her upcoming match…

A video aired with Rosemary and Jessika Havok recapping their past interactions in the undead realm. They recapped it with a storybook motif

Twitch Notes: Heading into Hour Two, the twitch viewship was at 2,400. Melissa Santos was hosting the Twitch stream from her kitchen. She was answering the questions from the viewers. A bearded Brian Cage could be seen walking in and out of the kitchen getting food out of the fridge.

The commercials ended heading into the 2nd hour.

3. Jessika Havok vs. Rosemary in a Full Metal Mayhem match. Rosemary was mic’d up in the ring. Rosemary used a staple gun on Havok early on. Havlk ended Rosemary’s attack with a shortarm lariat. Havok “stapled” Rosemary a few times after Rosemary tried to beg for mercy. Madison Rayne said it looks like Rosemary is more concerned about Taya’s well being. Rosemary managed to hit Havok with a Sling Blade, into the ground and pound. Rosemary hit Havok several times with street signs. Havok came back with a big boot. Rosemary sidestepped Havok, sending havok into a chair at ringside.

Rosemary wrapped a chain around the neck of Havok, and used the turnbuckle as a pivot point to choke Havok. Rosemary asked Havok how it felt to have James Mitchell’s blood on her hands. Havok yanked Rosemary back and slammed Rosemary to the mat. Josh wondered if Rosemary is talking too much. Josh Mathews talked about how Rosemary has “powers”. Props to Rayne for calling it mind games.

Havok have Rosemary a series of Face Wash kicks in the corner. Havok face washed a trash lid into the head of Rosemary. Havok put Rosemary’s head on a chair. Rosemary sidestepped being hit by a chain. Rosemary yanked Havok into the chair. Havok had both the chain and chair on her neck. Suddenly some woman named “Nevaeh” was shown watching the match in the crowd area. Madison Rayne kept saying she knew who Nevaeh was, but she wouldn’t tell us anything about her.

Josh kept wondering who Nevaeh was. Josh called out Madison Rayne for claiming to know who Nevaeh is, but not telling anyone. Josh also reminded people that Rosemary is drinking away her problems while hanging out with Taya Valkyrie…

The Impact Plus Flashback Match of the Week was Rich Swann vs. Sami Callihan in a no-dq match from Rebellion 2019. Swann won (Because Callihan doesn’t win many PPV matches)…

Gia Miller ran into Michel Elgin about his thoughts on Eddie Edwards and Tessa Blanchard not being here. Elgin said it’s the same story as last week. Elgin said he’s disappointed because he can’t send Eddie and Tessa to the hospital. Elgin said he’s going to become Impact Wrestling World Champion and he’s been saying that since the last Rebellion…[c]

Michael Elgin made his entrance in ring gear with a mic in hand 30 minutes at the top of the hour. Elgin talked about how Rebellion is when he made a claim last year, where he claimed he was going to be world champion. Elgin said he had his sights set and it was supposed to happen one year in 2020. Elgin noted his opponents couldn’t make it. Elgin said Tessa claims to be in Mexico, but he thinks Tessa thinks she bit too much than she could chew. Elgin said Eddie must be scared after that Best of 5 series. Elgin called for a referee to enter the ring and raise his hand.

Elgin said it didn’t feel right for the referee to hold his hand up and asked for Dave Penzer to enter the ring. Elgin threatened Dave Penzer to enter the ring. Elgin said that Penzer will announce Elgin as new champ when the referee holds his hand up. Dave Penzer then was about to do the announcement before the lights cut off. Moose made his entrance. Moose made his entrance wearing the TNA World Heavyweight Championship (didn’t someone throw that in the trash?).

Moose grabbed a mic to confront Elgin. Moose said he understands Elgin’s pain. Moose said Elgin doesn’t have an opponent now. Moose said Eddie isn’t here and Tessa is holding the Impact belt hostage in Mexico. Elgin agreed and said he’s the best wrestler in the world. Moose called Elgin out for cutting off Moose. Moose claimed to be the TNA Heavyweight Champion. Elgin said Moose is running down TNA. Elgin said he respect’s TNA, but the company is Impact now. Elgin told Moose to take his midcard comedy act away from this ring.

Moose bragged about conquering TNA wrestlers over the past months. Moose said that rather than whine like a bitch, Elgin just needs to ask for a title shot. Elgin was cut off by Shawn Hernandez. Hernandez talked about how Moose runs his mouth. Hernandez said you need to beat somebody to be world champion. Hernandez said it looks like Elgin and Moose should fight, but there isn’t a fight without the Super Mex. Moose, Hernandez, and Elgin brawled into the break…

4. Michael Elgin vs. Moose vs. Shawn Hernandez. Elgin hit Moose and Hernandez with a Tope Con Hilo. Josh noted that this is the main event of Rebellion. All three men brawled in the ring. Elgin and Hernandez helped each other hip toss Moose. Moose kept talking up how big of a main event this was. Hernandez hit Elgin with a slingshot shoulder tackle. Moose caught Hernandez with a high dropkick. Josh talked about it being so shocking to see the TNA Heavyweight Belt in Impact.

Moose pulled the referee out of the ring. Elgin caught Moose with a wrecking ball dropkick at ringside. Josh reminded people that there was no DQ in a triple threat. Elgin shoved one referee to the mat. REF BUMP!!! A second ref ran out. Hernandez hit Elgin and the referee with a dive. REF BUMP 2!!! Hernandez took his time dragging the referee into the ring. Moose ended up hitting Hernandez with a spear for the victory.

Moose celebrated holding up the TNA Heavyweight Championship. Moose made sure Dave Penzer announced Moose as the TNA Champion and Penzer obliged…