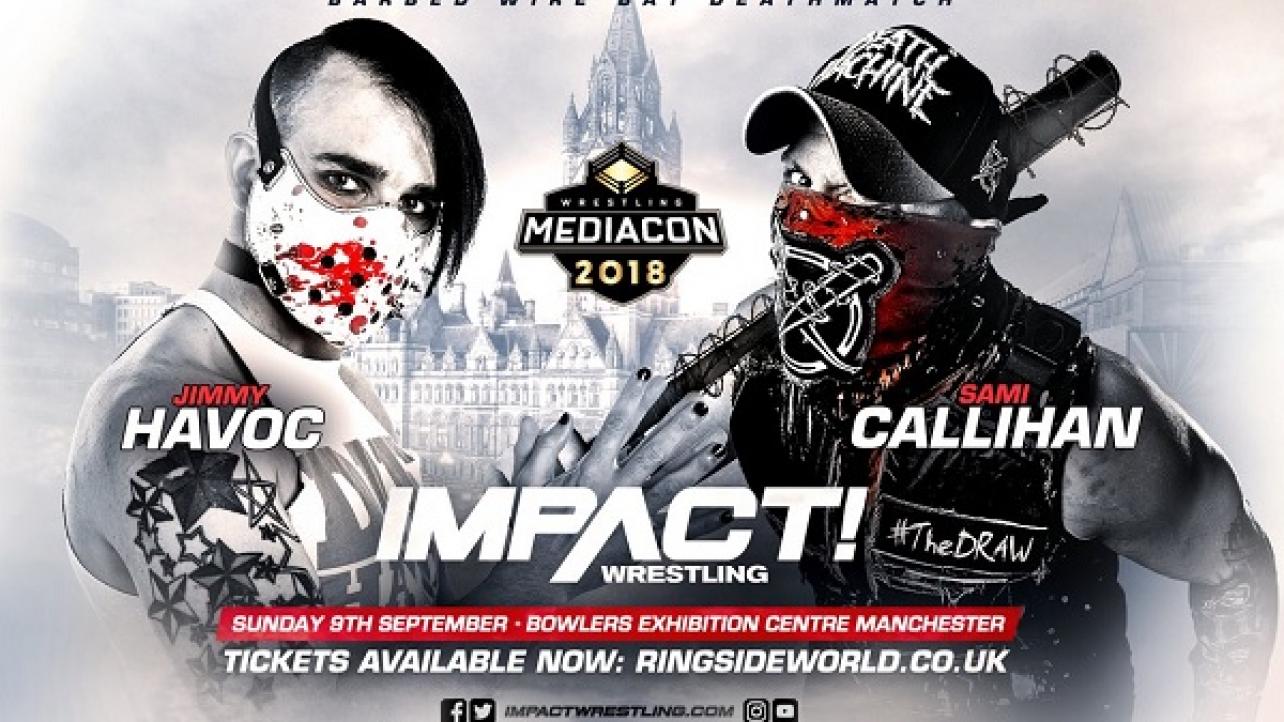 Featured below, courtesy of Will Cooling (@WillCooling) and F4WOnline.com are complete results from the show.

A fun triple threat to open the show, although not to the standard set by RevPro’s British Super J-Cup. This very much stuck to the usual triple-threat formula with guys taking turns to disappear so the two men in the ring could fight one-on-one. It did however start with a fun exchange, as Lee and Swann complained about the smoke used in Sydal’s entrance not clearing quickly enough. Likewise, Lee became irate at Swann refusing to lock-up and instead dance in the center of the ring.

The finish came out of nowhere with Swann rolling up Sydal for the victory. Given the abruptness of the finish and Swann’s interactions with the referee, there was more than a hint that maybe Lee was late with a planned interruption.

This was a really fun tag team match that played to the babyface/heel formula really well, as the WOS Wrestling regulars (Maxted & Robbie X) made for a good little man-big man team. Maxted began by roughhousing his opponents, and given his level of experience, looked really good here. He then tagged in Robbie X, who used his quickness and balance to run rings around his opponents.

Steel and McCluskey would rally, successfully isolating Robbie X. The Scot ultimately made the tag, with Maxted sending the heels flying. His flying neckbreaker looked particularly good. The finish came with Robbie X hitting a running Shooting Star Press on McCluskey while Maxted held Steel on the outside.

A surprisingly even match that saw Yung throw a chair into the ring to create the distraction so she could spit mist into Austin’s eyes before hitting the Panic Switch. Austin is a Manchester native, and so despite not being affiliated with a major promotion, she was pretty over throughout the match. She started strong, but Yung would gain the upper hand whenever they brawled outside the ring.

Midway through the match, Yung placed Austin on a chair outside, took her dress off, and then did a cannonball off the ring apron onto her. Strangely after this point, there was no more brawling. Austin dominated the match until the finish. While that may have been odd storytelling, the action was good with Austin looking very impressive in defeat.

This was a great match as the veteran team of Fleisch and Storm put on an incredible performance before falling to the Street Sweeper. The match started fast, with both Brits turning back the clock with incredible high spots. For example, when LAX moved out of the way of Fleisch, Storm would tag in and dive over the top rope onto them.

The Impact Tag Team Champions established control, isolating Fleisch, who did a terrific job of playing babyface in peril. However, all hell broke loose when he tagged in Storm, as the Brits went crazy in the finishing stretch. Not only did Fleisch hit an Asai moonsault on LAX, but Storm came up with all sorts of innovative ways to throw him onto their opponents.

Terrific match. By the end it was getting the best reactions of the day. Afterwards, Storm and Fleisch teased dissension with LAX — before endorsing them.

The crowd reactions were interesting, with Hendry getting by far the louder negative reaction from a divided crowd and Drake having a loud cheering section. It’s worth noting that Hendry frequently appeared in Manchester as a heel for What Culture Pro Wrestling.

After the craziness of the previous contest, this was a pretty basic match, but it was fine for what it was. The story was very much Drake controlling Hendry, save for the occasional hope spot (such as Hendry going for the Hendry Lock), but Drake ultimately losing due to a lapse in concentration. Drake went to pick Hendry up, but Hendry countered into a cradle for the win.

Edwards and Sysum secured the win after Edwards laid out the opposition with a kendo stick.

Havoc was easily the most over person on the entire show, with loud chants for him from the second he entered. This had one violent weapons spot after another, although there wasn’t the high-impact stunt falls you sometimes get in these matches. There was, however, a fair amount of blood shed, particularly from Havoc.

Indeed, there was relatively little brawling on the outside, which was a positive considering they weren’t putting the match on the big screen. They both used chairs, including several nasty spots where they threw them at each other’s head. A fun exchange saw Callihan stapling paper to Havoc’s body, only for Havoc to return the favor by using the paper to give Callihan paper cuts, including one on his tongue. Both then made the cuts worse by pouring lemon juice on each other.

While Callihan was first to retrieve the baseball bat, Havoc got to use it first. He quickly took it apart, wrapping the barbwire around his arm as he teased several Rainmakers. By the time the finish came, Havoc was barefoot, with Callihan having taken his boots off in an attempt to force him to stand on the thumbtacks that were in the ring.

There was a fun spot where Havoc managed to jump over the thumbtacks despite being whipped in their direction. However, he was less lucky when he went for a double-foot stomp from the top rope, jumping feet first into the thumbtacks. Callihan quickly capitalized with a piledriver for the victory.