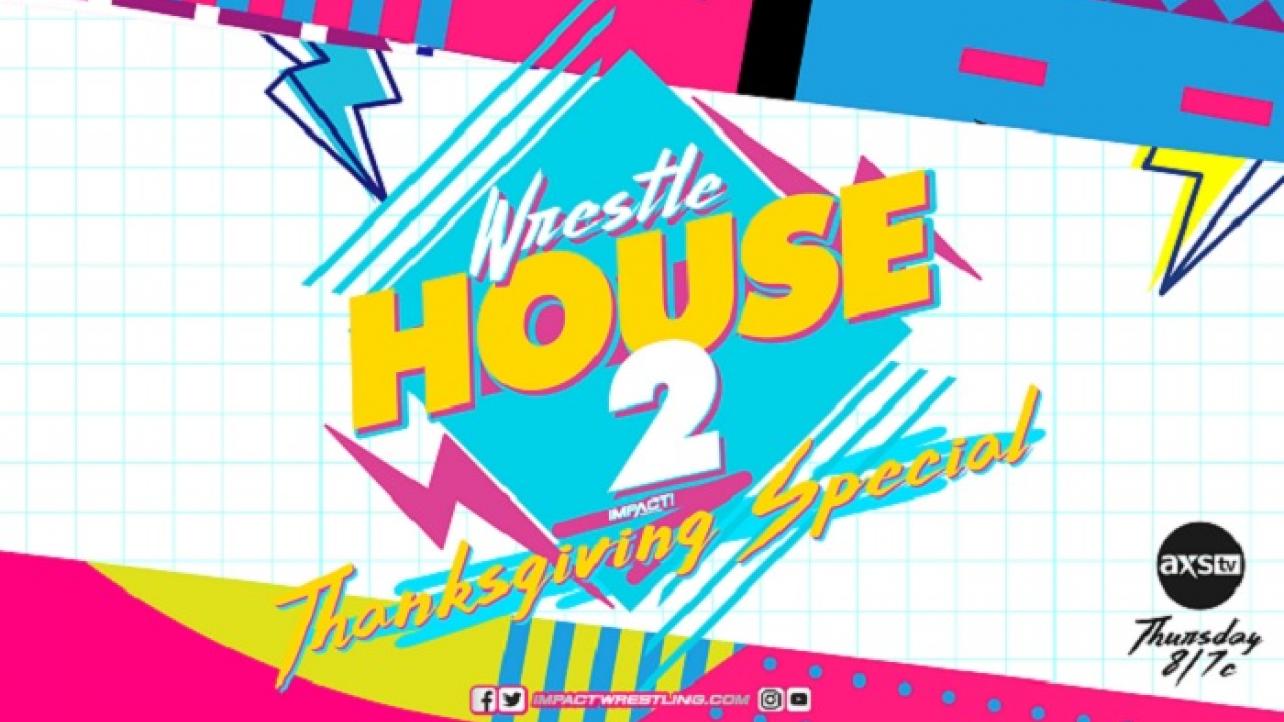 Wrestle House II is in the books.

Featured below are complete results of the show, which aired on AXS TV on Thanksgiving Thursday on November 25, 2021. The following report comes from Antonio Garza (@THEWREVOLUTION) and F4WOnline.com.

James Mitchell is tonight’s narrator, he first recapped Wrestle House 1, which ended with the engagement of Rosemary and John E. Bravo, which would later on lead to the attempted murder of Bravo at the hands of Lawrence D, which in itself would lead to the rise and fall of Swinger’s Palace.

In this version of Wrestle House, we have Black Taurus, Crazzy Steve, Havok, and Rosemary from Decay. Johnny Swinger, Hernandez, Alisha Edwards, and the Swingerellas from Swinger’s Palace. Also, Madison Rayne, Kaleb, Chris Sabin, and John E. Bravo. Sabin is the sexy hunk of the house.

Decay kept them all hostage until they made Swinger be happy and thankful, since Decay will gain Bravo’s virgin blood.

The show was structured as a countdown to Thanksgiving day. On the second day, Kaleb tried to recruit Riley of the Swingerellas as a reality TV star, but when he noticed that she only had eyes for Sabin, so Kaleb challenged him to a match

Match actually happened in a venue, with Dr. Ross, Sinn Bodhi, and James Mitchell on commentary, yet the commentary audio was only on when the table was on screen, not during the match.

On the third day, Madison Rayne complained that everyone was taking their time to hang out. Black Taurus read one of the classics, dressed in a suit, and heard classical music. It was perfect.

Rosemary and Havok told the crowd that everyone booked for Turning Point were getting a chance to leave for the day and go wrestle.

Alisha Edwards and Madison Rayne joined together to come up with a plan to make Swinger happy so they could all leave. The plan was a match from IPWF, Julian Cumberbund (Ethan Page) vs Downtown Daddy Brown (Willie Mack), the idea was to give Swinger a match against Downtown Daddy Brown so Swinger and him could wrestle one last time. Brown and Swinger hated each other so much that Brown decided to come out of retirement for this, but until the morning because Brown went to sleep at 6PM.

Match was worked as an old school match. Bravo had a close chance at winning after a referee bump, but Brown recovered and got the win.

After the match, everyone was transported back to the house, where Alisha accidentally revealed to Swinger why they were in the house. Swinger, angry, told them that now he was going to keep them all imprisoned in the house because he was never going to be happy, on purpose.

On the fourth day, after some arguing, the house divided itself between the ones who wanted to leave and the ones that wanted to help Swinger. Rayne asked for a 5-on-5 match and if they win, they get sent back. Alisha asked that the 5th person on her team was Eddie Edwards. Everyone sang Edwards’ theme for his entrance.

Decay controlled most of the match, even Edwards couldn’t take on Steve and Sabin’s double teams. They teased a 10-person suplex, but instead broke it and all of Decay bit their opponents, followed by Rosemary hitting a spear on Alisha for the win. Sabin was enjoying being part of Decay a bit too much.

After the match, Kaleb kept hitting on Riley, told her she should become a full time referee.

As a new plan, Rosemary and Swingerella #1 decided to bring in Lawrence D as her boyfriend to make Swinger jealous. Apparently, this is D’s house. Swinger didn’t care about D.

Madison Rayne brought in Swinger to Locker Room Talk to have him meet Swinger’s hero, Gene Simmons. It was actually The Demon, but Swinger wasn’t smarted up about it. The Demon told Swinger about finding love and never letting go once he did.

Swinger was now motivated and asked Swingerella #1 out, but since Lawrence D was still there, he got jealous, so Swinger challenged him to a match for the love of Swingerella #1.

This was a match between two tricksters, they kept cheating on each other until Bravo stopped a pin after finding out that D had sprayed his cologne on Swinger. During the distraction, Swinger Fuji’d D and got the pin.

After the match, Swinger proposed to Swingerella #1. Rosemary said that no one was leaving until they went to the altar.

Next day, Alisha Edwards was worried that Eddie was going to ruin the wedding. Swinger asked Hernandez to be his best man. Hernandez accepted, but later talked with Alisha that he was worried that there was something else going on.

Later on, Hernandez found out that Rosemary was trying to steal Bravo’s soul, but when he tried to stop them, Rosemary transported him to a match with Black Taurus. Decay surrounded Hernandez, coming off like heels.

Taurus jumped Hernandez and had some offense, but Hernandez came back with a low blow. Hernandez went for a border toss, but Taurus dodged. Decay distracted Hernandez and allowed Taurus to take out his leg and rolled him up for the win.

Eddie Edwards also heard Decay and Bravo talk about their plan. As he was about to tell everyone, Rosemary also cursed him so he’d be drunk.

On their way to the wedding, Kaleb left Riley alone after Madison Rayne bullied him, so Sabin walked up and said they could go together.

Time for the wedding. Father James Mitchell officiated. Swinger was the first to give his vows, who only talked about all the women he’d been with in the past.

Edwards ran in and tried to reveal the truth, but he was too drunk to talk, but Hernandez recovered his memory and the truth was out, Rosemary was trying to kill Bravo. Then it became a weird joke about Britney Spears.

Bravo revealed that he wasn’t a virgin anymore, so Rosemary couldn’t get his blood. Swingerella #1 revealed that she and Bravo had been sleeping together, but Swinger was ok with that, rule #2 of Professional Wrestling is to never fall in love with a Rizzazz, per Johnny Swinger. Bravo proposed to Brunhilda, Swingerella #1’s real name instead, and Mitchell made it official.

Afterwards, they all had Thanksgiving dinner and everyone was thankful. Santa Claus showed up.

Thanks again to Antonio Garza (@THEWREVOLUTION) and F4WOnline.com for the above IMPACT On AXS TV: Wrestle House II recap from Thanksgiving day.