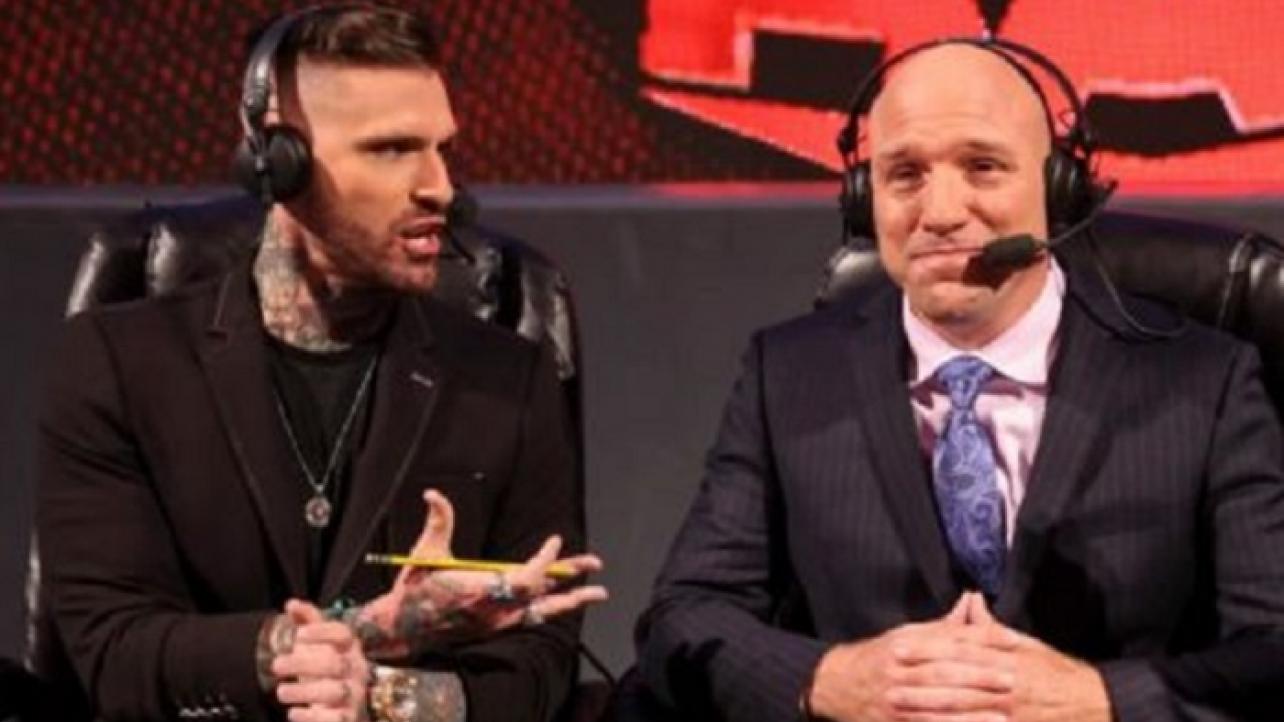 Jimmy Smith has Corey Graves’ back regarding the latest controversy over the latter’s WWE commentary.

On the latest installment of his podcast, “Unlocking the Cage with Jimmy Smith,” the former UFC and Bellator MMA commentator turned WWE announcer came to the defense of Graves over the criticism he has received from Alyssa Marino regarding the comments he makes about the physical appearance of women wrestlers during their matches on WWE programming.

Featured below is an excerpt from the show where he touches on this topic at length.

“Here’s the deal that is interesting to me. The reason I point out that Corey Graves’ real name, and it says so in the article, is Matthew Polinsky. I am the only commentator on Monday Night Raw using his real name. I hate to break it to you. Bryan Saxton’s real name is not Bryon Saxton. Corey Graves’ real name is not Corey Graves. Me, Jimmy Smith, the guy sitting in the middle, is the only one using his real name. What does that tell you? I’m the only one that doesn’t have a character. Corey, to my right, is a heel. He is supposed to be an a-hole. He is supposed to be sarcastic. He is supposed to break my balls all the time. He’s supposed to jump down my throat. He’s supposed to get distracted by not just Carmella who’s whole schtick is that she’s super duper beautiful, he did the same thing with Eva Marie, who’s whole schtick was that she is super duper beautiful.

To my left, Byron Saxton is a face. He’s a good guy. Part of the schtick if you notice on Monday Night RAW, Corey goes off about how gorgeous Carmella is and she’s the greatest. We are like, ‘Corey, get back to match. You’re an idiot. Focus.’ We’re supposed to do that. He is playing a character and Byron Saxton is playing a character. When they’re making comments about somebody’s attractiveness or beauty, the fact that I’m the straight man, I don’t have a character, I’m kind of in the middle, and I say, ‘Corey, let’s get back to the actual match’ or whatever I say, we are part of the show. We are part of the entertainment. To even call it commentary, it’s not inaccurate, but it’s not 100% accurate either. I’m not doing commentary when I do WWE like I do when I do commentary for fight sports like boxing and MMA. It’s totally different.

People ask me all the time, ‘What’s the difference if you go to WWE as opposed to the UFC?’ With WWE, I’m part of the show. Things that you may see as weaknesses in commentary are things they want from us. When a character does a character reset and comes up from NXT or some other organization, and I pretend to not know who they were or any of their accomplishments before they got to Monday Night Raw, I’m doing what I’m being told. It’s not that I didn’t do my research. It’s not that I didn’t know who Piper Niven was. Of course I did. I did my homework like I was supposed to, but when she came to Raw from NXT U.K they reset her character and called her Doudrop. The directive was to reset her character. People got pissed online saying, ‘Jimmy Smith and Corey Graves don’t even know who Piper Niven is.’ Of course we know who Piper Niven is, but we’re part of the show, and part of the show is resetting her character. To not recognize that when Corey Graves is talking about his fiance, or going off about Eva Maria who is another one he went off about, he praises one heel over another, he is doing his job. His job is to be a a-hole, douchebag character.”