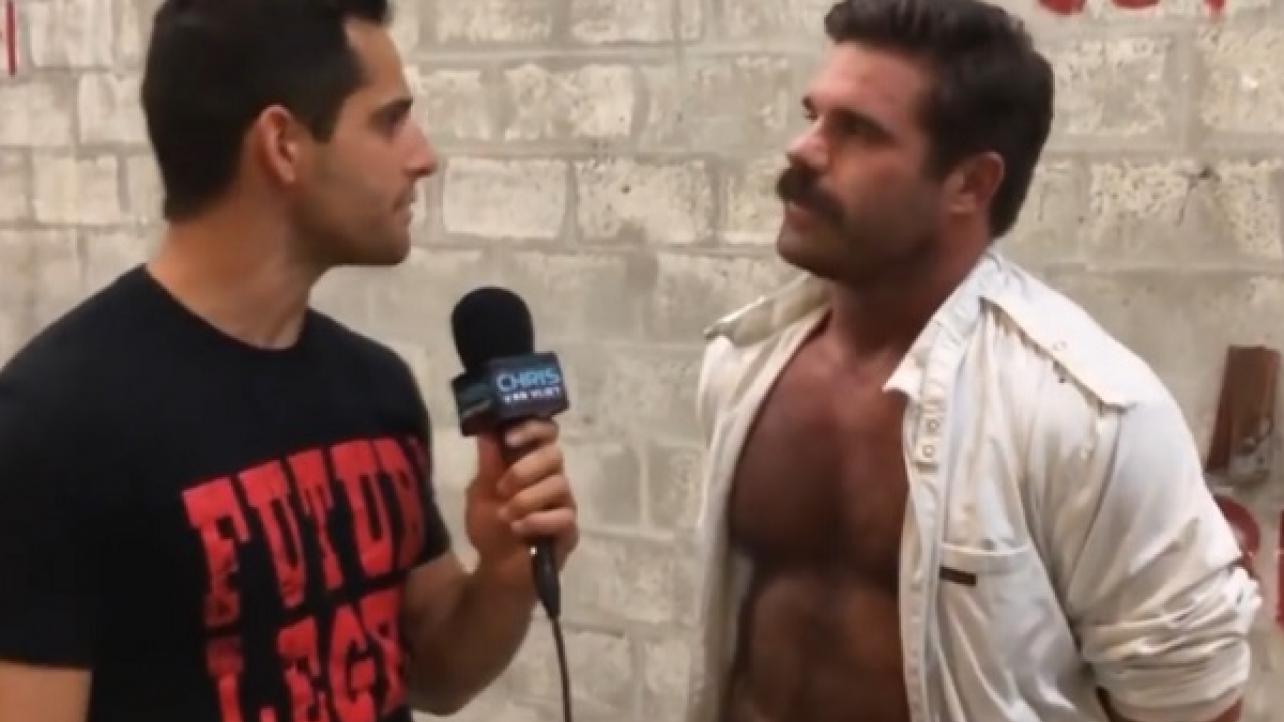 Joey Ryan Talks About Not Wanting To Go To WWE, His Elaborate ALL IN Entrance & More

WSVN-TV’s Chris Van Vliet sent along the following to eWrestling.com:

Happy Friday, hope you’re doing great! I had a chance to chat with Joey Ryan last night at Major League Wrestling’s War Games taping in Fort Lauderdale, FL last night and wanted to pass along the interview. He talked about his entrance at ALLIN, why he doesn’t want to sign with WWE, how to do a proper penis plex, the fact that fans send him d*ck pics and much more!

His entrance at ALL IN took several months of preparation to pull off: “There was quite a few months of preparation because we had shot the murder and the murder scene revival all at the same time. It was supposed to be like a 2 or 3 week storyline but then they saw the footage and said it was really good and that we needed to draw this out as long as we could. And it was really up to the audience of how long they would let us stretch it out and how receptive they would be to the bits like the false arrest of Stephen Amell which actually played into his storyline with Christopher Daniels. We stretched it out as long as we could adding elements with other characters as long as the audience were taking the new additions we were adding in. Then when we realized we could let it sit all the way until ALL IN, we figured if we’re going to do this at ALL IN we needed to do something big with it and that’s where the idea for the penis druids came up.”

What was the match at ALL IN that everyone in the back was crowded around to watch? “I think initially, that first match with The Briscoes and So-Cal Uncensored because people wanted to see how the show would kick off. I think that definitely had a lot of people watching because they wanted to see what the vibe in the room was and once those teams started clicking and they started motoring, it just settled everybody’s nerves and we knew we were going to have a good show.”

Why he has no interesting in signing with WWE: “I know the standard NXT rate that they give most newcomers and I make well beyond that. But I know people who have signed on from the indies who were doing well and they get a better rate because they are more valued. It’s weird because pretty much in every business, the goal and the dream is to be your own boss, set your own schedule, be successful on your own terms. In wrestling, a lot of wrestling fans want you to give all that up and sign your future to someone else’s hands and have a boss and have a schedule that you’re required to keep. So it’s kind of weird that in just about any other business, the dream is to do what I’m doing now but in wrestling everyone thinks you’re not successful until you have a boss which is kind of bizarre. But that’s the way it is and I’m pretty confident and really enjoy what I’m doing.”

The surprising DMs he receives from fans: “I get a lot of d*ck pics from fans, which might be surprising. I don’t know if it’s like a come on to me or if it’s like ‘hey look at my d*ck too’ kind of thing but I feel like a female wrestler sometimes with the amount of d*ck in my DMs.”

Joey Ryan Talks About Not Wanting To Go To WWE, His Elaborate ALL IN Entrance & More