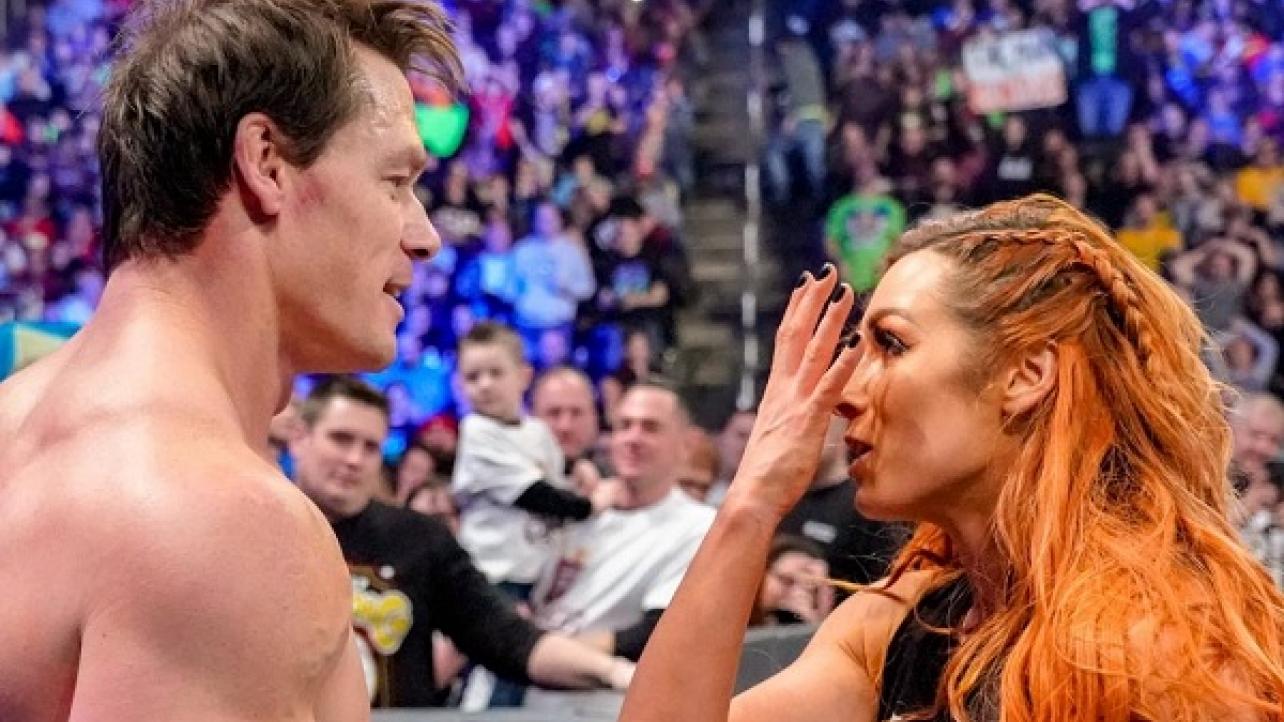 John Cena recently spoke with the folks from Uproxx to talk about his promotional deal with the Hefty Ultra Strong. During the interview, Cena compared the recent rise of Becky Lynch in WWE to his own rise in the past. Featured below are some of the highlights.

On WWE’s women’s division possibly headlining WrestleMania for the first time ever this year: “We are in the entertainment business. Whatever the consumer finds most entertaining, regardless of sex, race, creed, color, religion anything. What the consumer wants, WWE will give. I think Daniel Bryan a few years ago in the main event of WrestleMania was a great example of that. And I think the women that are supposedly within the main event of WrestleMania this year were pushing forward toward that historic, monumental occasion.

On Becky Lynch’s recent rise to the top in WWE: “I’m one of those people who think that it should’ve happened a whole lot earlier, but I’m very proud that our audience is at a point where they’re screaming at the top of their lungs, ‘Hey, this is what we want to see.’ I was so extremely happy for Becky Lynch to be able to find this personality that she carved out of thin air and almost out of desperation and become so successful with it.”

On Lynch’s rise being comparable to his own rise to the top of WWE in the past: “I’m really passionate about this stuff. I’ve always looked at WWE as the land of opportunity. I have been surrounded by performers that so many times become complacent and negative and they think like, ‘Oh, I can’t do this because of X.’ Or ‘I can’t do this because this person is holding me down.’ I know when I speak to those people they don’t necessarily take stock in what I say, but I only say what I do because I started from nothing. I was about to be fired. I was in a Becky Lynch-type scenario where I was forgotten and I was about to be let go and I took a chance on myself. I took a chance on redefining my character and it worked and I’ve never stopped. And I wasn’t the corporate headquarters first, second, third, fourth, fifth or sixth choice, but the audience began to make noise. And I connected with the audience and the rest is history.

“That’s what’s wonderful about WWE. It truly is an enterprise system for any performer to connect with the audience. And once they connect with the audience, it doesn’t matter if they’re male or female. It doesn’t matter where you’re from. What you look like. You become a centerpiece of our entertainment and I think that’s the most fascinating thing about what we do. It truly is go out there and connect and then see what happens.”

Check out the complete John Cena interview at Uproxx.com.