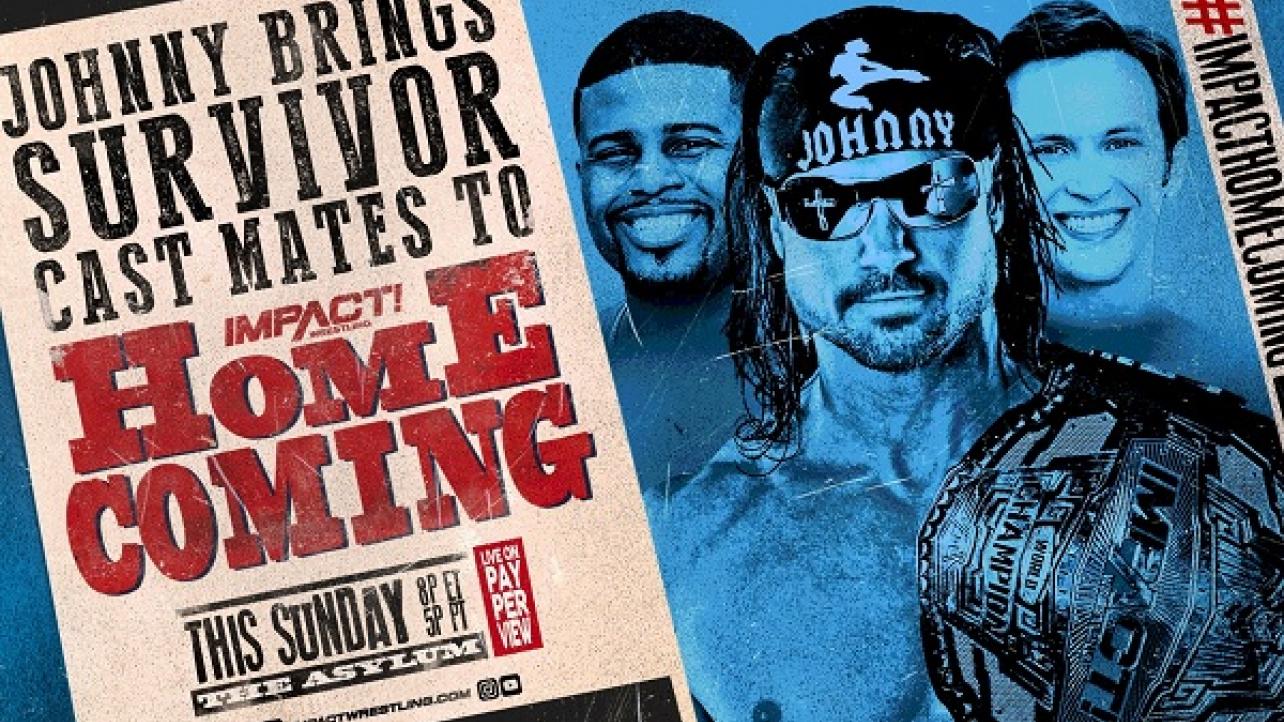 Nick Wilson – the $1 million winner of Survivor: David vs. Goliath, the just-finished 37th season of the hit reality TV show – will be sitting in the front row at Homecoming, which will be held at the famed Asylum Arena at the Nashville Fairgrounds. Wilson is bringing 10 other loyal Impact fans and even fellow Survivor contestant Davie Rickenbacker.

Wilson and Rickenbacker were aligned on the original David tribe, while Impact battled on the TV show as part of the Goliath tribe. Impact was the seventh voted off the island, on day 22, and the second member of the jury, which ultimately voted Wilson as the Sole Survivor and $1 million winner.

“I’m really excited that Nick and Davie will be in my corner for the Homecoming pay-per-view match,” said reigning World Champion Johnny Impact. “Although I was rivals with both at the start of Survivor, we ultimately became good friends and I know each will have my back. Brian Cage won’t be able to blindside me with Nick and Davie watching my back.”

Impact has dipped into the Survivor well for additional support in his Homecoming match. Impact has talked at-length with Professor Christian Hubicki about how to defeat a Machine.

The Homecoming pay-per-view features all of the Superstars and Knockouts of IMPACT Wrestling, including Impact’s real-life wife, Taya Valkyrie, who challenges Tessa Blanchard for the Knockouts Championship.

Impact and Valkyrie, married days after he returned from filming Survivor in Fiji, are looking to be the company’s first husband-wife duo to simultaneously hold major championship titles – and one of the first-ever in any pro wrestling promotion.

The Homecoming pay-per-view also features a four-man Ultimate-X match to crown a new X-Division Champion, plus LAX (Santana and Ortiz) defends the Tag-Team Championship against the Lucha Brothers (Pentagon Jr. and Fenix), while Eli Drake battles Abyss in a Monster’s Ball Match.

Homecoming, the three-hour extravaganza kicks off at 8:00 p.m. ET and will be distributed on cable, satellite and digital pay-per-view, including DISH, DirecTV, iN Demand, Vubiquity, Rogers, Bell, Shaw and Sasktel across North America, and streaming live globally exclusively on the FITE.tv app and if you order on the FITE.tv app, be sure to look for your code for a FREE 2019 IMPACT Calendar!