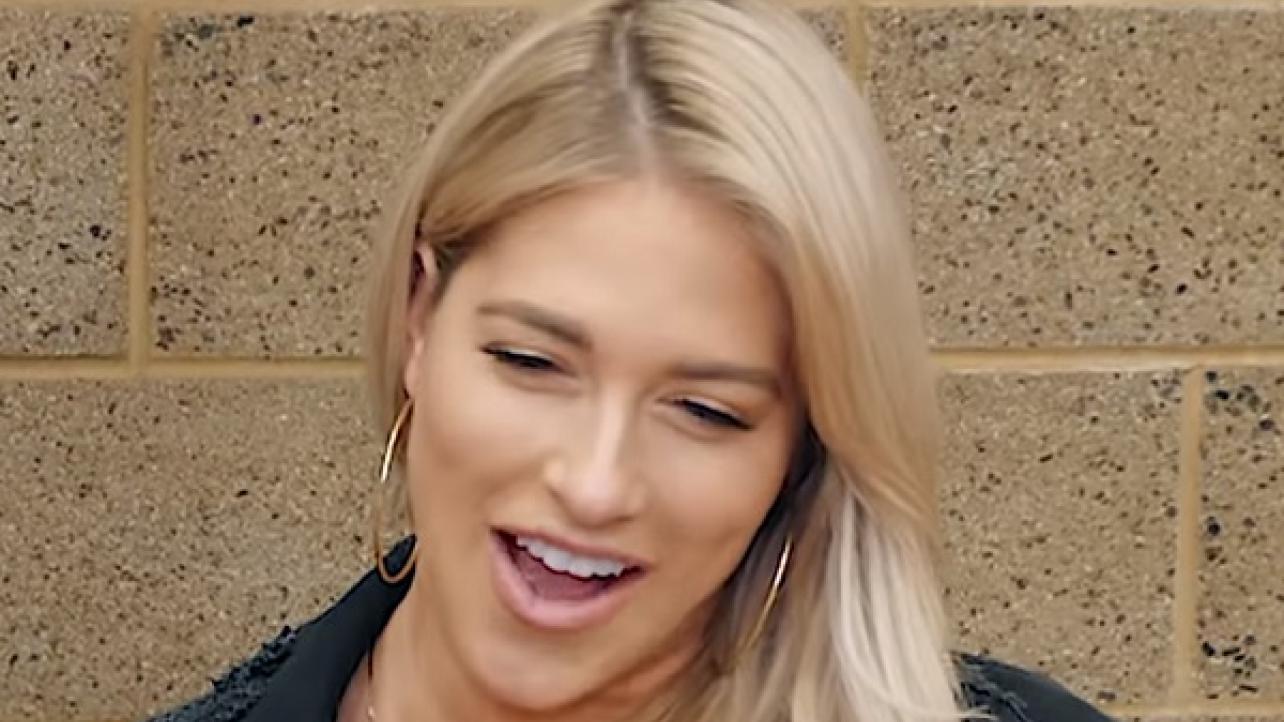 Former WWE Divas Champion Kelly Kelly (Barbie Blank) recently spoke with the folks from Ring The Belle for an in-depth sit-down video interview. Featured below are some of the highlights.

On winning her first WWE Divas Championship on the Raw “Power to the People” episode: “That was honestly my favorite moment in WWE. Winning the Divas Championship was a dream come true. The fact that it was voted by the fans was the ultimate moment of my career. No one knew [the voting results] and we were all standing backstage. We all had matches planned in our heads, and we were just gonna go out and see how it happens.”

On WWE letting Kelly Kelly go loose on Beth Phoenix after she lost her Divas Championship: “That was the night after I lost the championship. They told me to just go out there and let loose. Whatever you feel when you’re out there, just do it. And I did. No one had seen that side of me before. It was so great for the fans to see that side because usually, they see happy-go-lucky, always-smiling, never-mad Kelly Kelly. For them to see this moment, and for me to get to do this was amazing.”

On why the storyline between her and Phoenix was dropped: “I think we were just going in a different direction. It had run its course. We have been wrestling against each other for the last six months.”

On why her storyline with Kharma that was dropped: “I actually had no idea. I just remember every week, we would have this segment. She would pick girls apart, and it’s always me left there. And her just giving me the eye and never really doing anything. Just kind of messing with me. And I didn’t really know what the point was. Like, I didn’t understand. It was like a big secret. Obviously, we didn’t get to do anything with it and she had to leave. It would’ve been really cool to do something with her. Still curious. Sad that I didn’t get to fully play that out.”

On her hitting the Kelly-Go-Round at WrestleMania 28: “It was WrestleMania and that was my Mania moment. I knew I wanted to have my own Mania moment. Fit Finlay let me do it. I was just so happy and nervous because I only practiced it that day. I’d never done it before. But I put all my confidence in Beth (Phoenix). We worked together for so long. She knew my skill set and she just took it perfectly for me. That is my WrestleMania moment.”

On where she got her finisher K2: “I watched Billy Gunn. He used to do it and I remember I got recommended that move. It was called a Fameasser and I just loved the way he got into it. And I just loved the movement and I thought it worked really well with my arsenal.”

On main eventing SmackDown with Edge, LayCool, and Dolph Ziggler: “When we were rehearsing and we were talking about it. Talking to Michelle and Layla, just beat the living crap out of me. I was gonna hold my tears in and when Vickie said, “You’re fired,” I’ll just let it all out. But they literally kicked the shit out of me for ten minutes.”

Check out more from the Kelly Kelly interview below, or at YouTube.com.