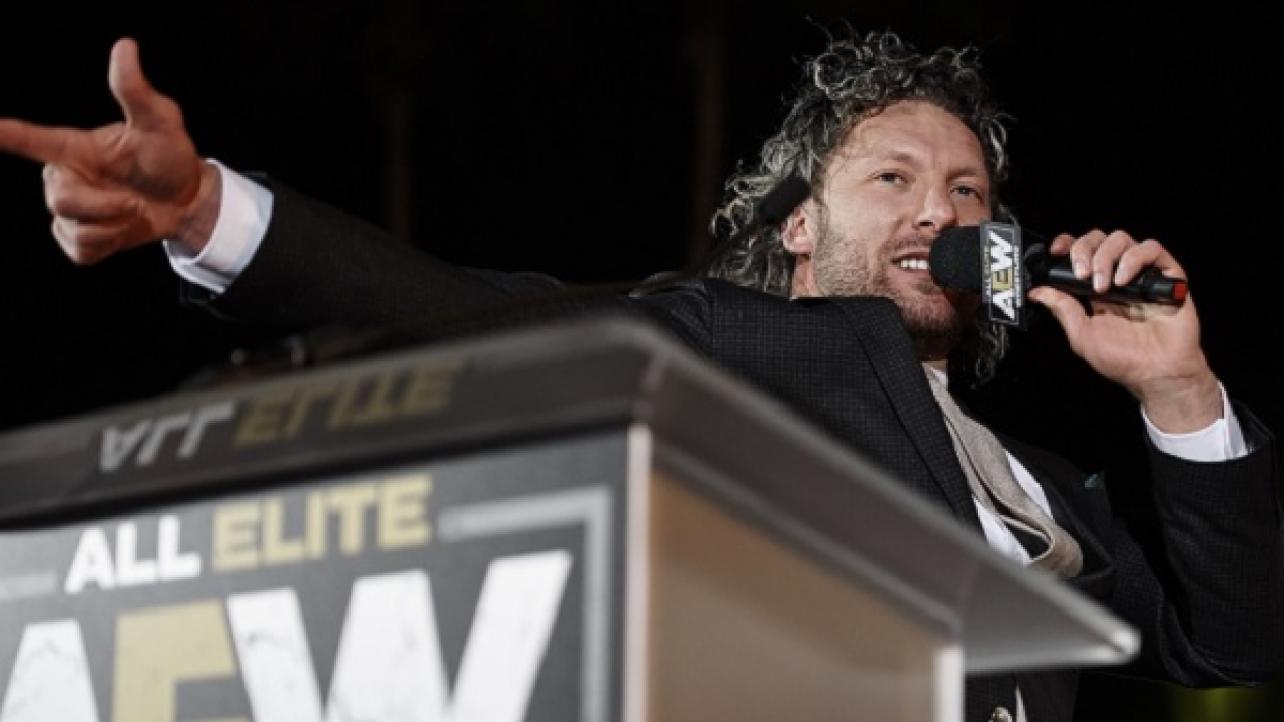 Ahead of the premiere of his new documentary, “Omega Man: A Wrestling Love Story” on TSN in Canada, AEW Superstar Kenny Omega spoke with the folks from The Two Man Power Trip Of Wrestling podcast for a promotional interview. Featured below are some of the highlights.

On the story behind the conception of his new documentary: “This whole thing came about a year and change ago. I received my first email from the producers and director and they had asked if I would be so kind as to let them into my life and follow me a day in the life of Kenny Omega in Japan. I thought maybe this was going to be a foreigner trying to make it in Japan and I had my reservations about it at first because I have a certain way that I live my life in Japan, the way I prepare for my big matches and I was worried that having a film crew kind of buzzing around me at all times was going to sort of interrupt my zen, so I actually turned them down at first. It wasn’t until they responded much later with a very nice email and kind of going into depth as to why they selected me as a topic of discussion, I had seen that there was a lot of passion behind this project and that these people were familiar with my career and were very interested in telling my story. Of course they didn’t know at the time what that story would be, they just wanted to see what it was like in Japan and what my career was all about and I suppose in the end it has become the wrestling love story because the sort of reunion with Kota Ibushi was a very big deal for me in the year of 2018 and it was a very storied and a storied event between the two of us that ran the course of over ten years. So to have all that documented in this film is and I don’t know because I haven’t seen it yet, a pretty cool thing.”

On not viewing the final product before the premiere of the documentary on TSN: “Truth be told, I’m a shy person and to me for lack of a better term it is a little embarrassing. I feel (I don’t know) strange to be the subject of a documentary. I’m used to wrestling camera crews following me, I’m used to wrestling style documentaries being aired on wrestling programs and wrestling streaming services but never a documentary that is a stand-alone documentary from people that don’t have experience in wrestling to kind of tell the story from an outsider perspective on wrestling. So, I was kind of scared to watch it and I didn’t think I would but now that sort of the preliminary reviews are coming in and generally they are all positive I might sit down and watch it because maybe there is nothing to be embarrassed about.”

On whether or not his AEW contract prevented him from wrestling Kazuchika Okada at the G1 Supercard show co-promoted by Ring Of Honor (ROH) and New Japan Pro Wrestling (NJPW) at Madison Square Garden in NYC during WrestleMania 35 Weekend: “I have zero restrictions on what I do as long as I feel it is in my best creative interests I am open to doing anything. But of course it has got to be a two way street and it takes two to tango and it is about timing. I was fully prepared for the epic showdown at Madison Square Garden and I thought it would have been a very cool match to have Okada / Omega at MSG and not because of the building. A building name or a location doesn’t really mean much to me. I have no emotional connection to Madison Square Garden and I know it is regarded as the mecca of Sports Entertainment in terms of a building but I just wanted to have that match on American soil just once. We sort of were able to show a little bit of our chemistry in America in the tag match we had (Myself and Ibushi vs. Okada and Ishii) and it felt good and it felt really fun and timing wise business is business and things didn’t work out the way that I had anticipated and we are not going to get it at Madison Square Garden. But that doesn’t mean that the story is over and the book is closed. We both are going to be very active in professional wrestling for a number of years I would assume and I think that if there is another opportunity for it and who knows it may be better to just wait it out and get that 5th match somewhere else down the line.”

On what goes into putting together a five-star match: “It is a lot of pressure and of course it takes two to tango but ironically when I use the word tango I can relate it to and liken it to perhaps ballroom dancing. Where the best dancers in the world can dance in sync with any partners that are professionally trained. Their body responds to every twitch of the muscle fiber and it almost becomes an animalistic response and it becomes reaction and becomes instinct and whether I’ve always had that or not I am not sure but I realized I had this skill in 2016 at the G1 in my first run in the G1. That was perhaps the way I wanted to approach my story telling plus the passion that I had and the pride that I had with my own performances were various components in a gigantic witches brew that allowed me to really evolve myself as a performer and once I made that gigantic evolutionary step I sort of felt that I unlocked the secret to I guess you could call it the five star match. Without sounding too egotistical, a five star match to me is kind of an easy thing to do with almost anybody. The only time I would falter in my quest to have a five star match was when I really go out of my way to try something absolutely new or something that I am unfamiliar with or 100% comfortable with because I could rehash and recycle the same old formula because I know what works but if I start doing that than I’ll stop growing and I don’t feel that I am finished yet in my process or evolution. So, I am still going to get a little frisky and I am still going to try new things but if someone had a gun to my head and said have a five star match with this guy, it is kind of light work at this point and pretty easy stuff.”

On his current interest level in joining WWE: “Right now no. Zero. Absolutely not. I am 100% focused on what we are doing with AEW and my interest starts and ends with just hoping the best for my friends that are there and I hope they do well, I know WrestleMania is coming up and it is a big show for them and I hope everyone kills it. If everyone is doing well then the industry does well and that is about it. Of course and I’ve said it before and I’ll say it again I just wait for the fantasy world which may or may not happen where we’ll work together someday.”

Check out the complete Kenny Omega interview on The Two Man Power Trip Of Wrestling podcast at Podomatic.com.