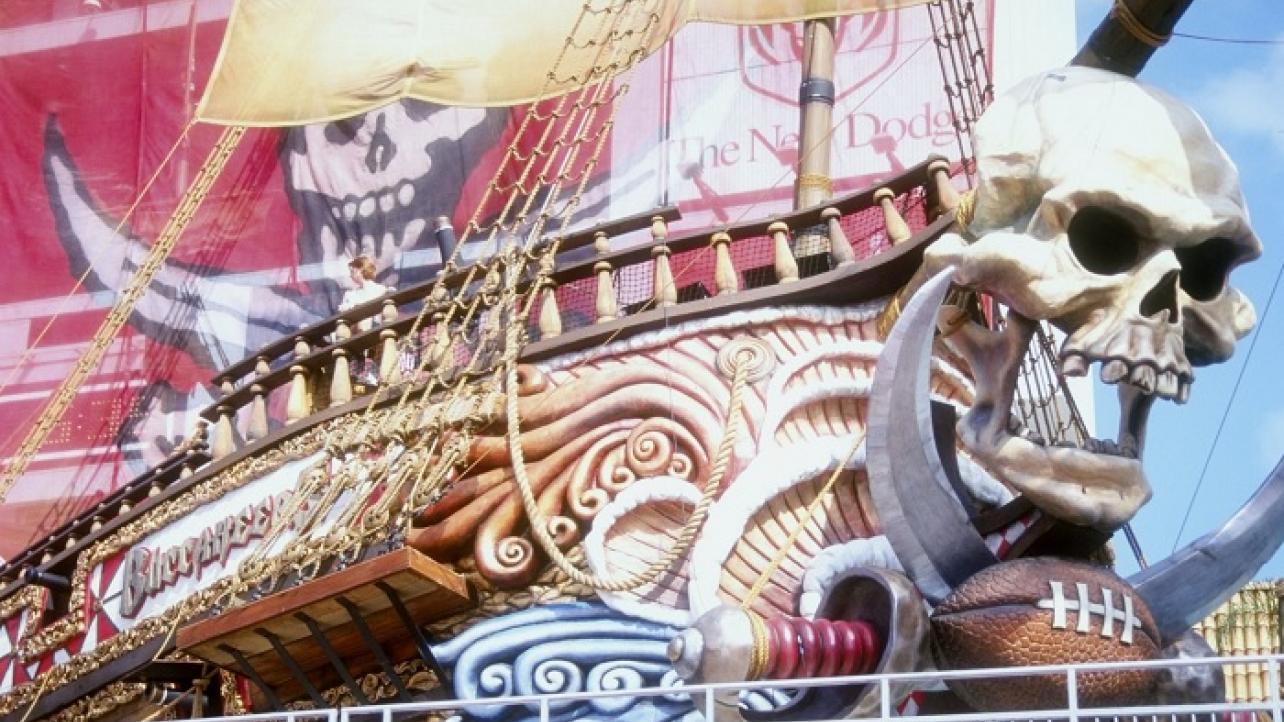 Kevin Owens Vows To Jump Off Pirate Ship At WrestleMania 37: “I’m Ready For It This Year …”

WWE superstar Kevin Owens recently spoke with Ryan Satin at Fox Sports about a number of topics, including how he is still planning to jump from the pirate ship at Raymond James Stadium for this year’s WrestleMania, and how he always tries to top himself during a big spot. Highlights are below.

Showing fans that he can still deliver in a big spot:

Well, in a way I don’t feel like I ever really had to show it to people because I think people know by now. But, the nature of our industry and the way things work and the amount of very talented people we have on the roster, just makes for an environment where you constantly have to prove your worth day after day, week after week, month after month, year after year, right? It’s almost like people in the industry or the company take things for granted. Like, I think after all the years I’ve put in – and I’m one of many, I’m not saying this just about myself – but, there are guys where when the shows go on the people in charge just know, “Oh, they’re going to have a good match. They take it for granted because they know it’s going to be a good match or they’re going to be able to tell this story great, or they’re going to be able to deliver this promo great. But, it becomes almost like it’s expected of us because it’s what we do. So, then it’s like, “Of course they had a good match.” It’s like, not special, almost. You see what I mean? So, once in a while, you have to have these special performances that are a bit above what you usually deliver even if what you usually deliver is good, – and like I said, we have a ton of men and women who do it on a weekly basis – but, once in a while, you just need this one performance to make people take notice again.

How he’s always trying to top himself:

Yeah. You know, in this case too, what’s particular about it is when we did the TLC match, we didn’t set out knowing that we’d be doing a match at the Royal Rumble. We didn’t even know about the cage match that was going to take match until the day of TLC, or the day before, and the cage match was, obviously, just a few days later. So, at TLC we went all out. Because in our minds, we weren’t like, “Oh, we know where this is going. We gotta save ourselves.” Like, no, man. We just threw it all out there. Then same for the cage match. Then the Rumble situation presented itself and it’s not like we can go backward and just have a normal match after what we had done at TLC already. So, yeah. It is a challenge, but it is enjoyable as well.

Adjusting his style after the loss of crowds due to the pandemic:

I really haven’t had to change. If anything, I think the experience I acquired working those smaller rooms in front of smaller crowds before WWE helps me a lot in this environment because there are guys and girls that are gonna go on Smackdown or RAW every week – now we have the Thunderdome with all the faces on the screen that kinda helps remind us there’s an audience out there – but when it was at the Performance Center, and it was just us and six or seven camera people and crew guys and then the commentators, I wasn’t shaken by it at all because I’ve wrestled in front of twenty people who make no noise. The experience is there. But, for those guys and gals who might have gotten signed right out of whatever wrestling program, football program, or right out of college and then right into the Performance Center and then right onto TV, working in front of no fans, even if the Performance Center is there to prepare you for that, because they do shows in front of nobody at the Performance Center just to get rounds in, just to get some experience, it could be really jarring. But, it really didn’t bother me and I really didn’t change how I worked at all. The only thing I changed is who I worked for. Because, even though I know there’s millions of people at home watching, I started having this mindset – and I’ve had it before, but not as much as now that the crowds were gone – the people we work with, from the camera guys to the crew to the stage managers, the producers, everybody, but especially our camera people, they’ve all been there for a really long time and they’ve seen a lot of wrestling. So, if I can do something that they’re entertained by, I know I’ve done something that everybody watching at home is entertained by. Because they’ve seen it all, like I said. So, that’s really rewarding. So, I’ve just kinda started working for them, because I know if they’re into it, people watching at home will be into it. And, yeah, I think that’s been a good way to go about it.

Still wants to jump from the pirate ship at WrestleMania:

No, I want to do it. I can’t promise people that I’m going to do it because, you know, circumstances and whatever. But, I can promise everybody that I’m gonna try as much as possible to do it. I’ll do my best. I’ll annoy anybody I can. I will get into anyone’s ear I possibly can. I will literally do everything in my power to get to the point where I can jump off that ship. But, even climbing up the ship, like, it’s already ready in my head. How I’m going to get up there, everything. I studied it. I did my research before I made that claim last year. So, I’m ready for it this year.

Kevin Owens Vows To Jump Off Pirate Ship At WrestleMania 37: “I’m Ready For It This Year …”