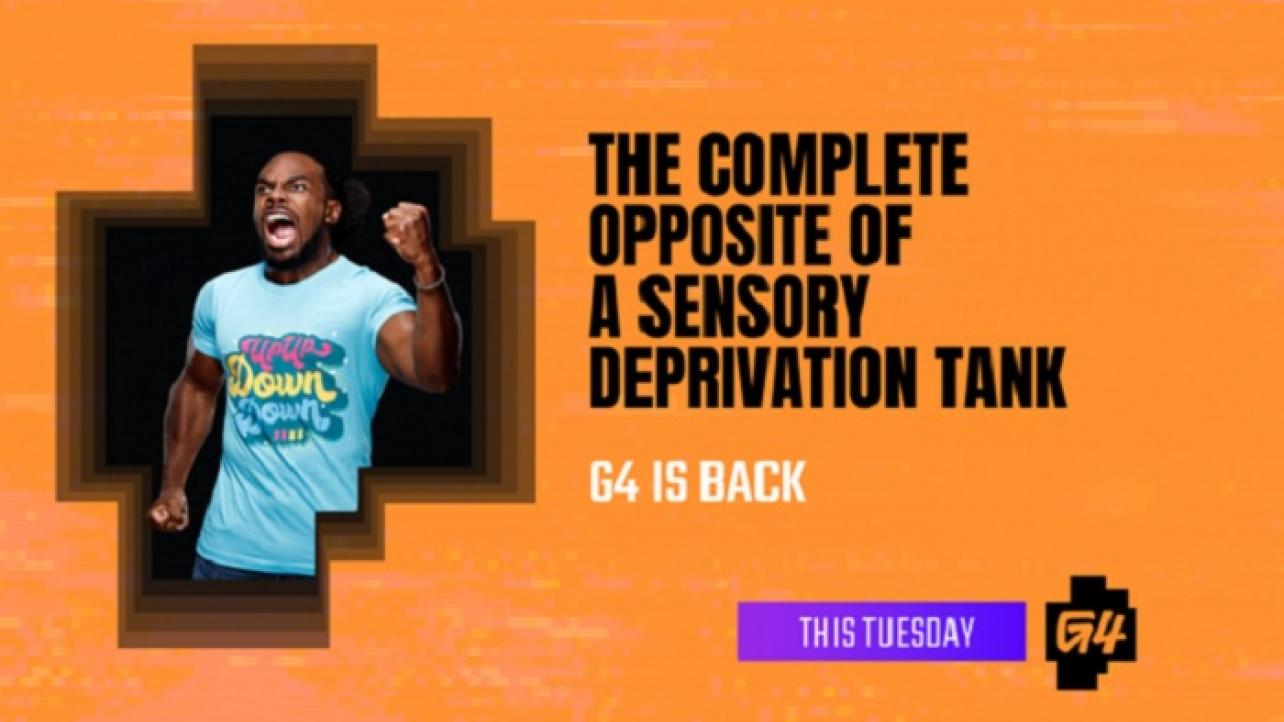 WWE’s King is ready for a royal spectacular.

On Monday, the company announced that 2021 King of the Ring tournament winner Xavier Woods will be on hand for G4’s “The Catastrophic Launch Spectacular!” on Tuesday.

The G4 Network is gearing up for a spectacular launch event with King Woods at the center of it.

“The Catastrophic Launch Spectacular!” is set for this Tuesday and will feature Woods along with the first looks at “Attack of the Show!,” “Xplay,” “Boosted,” “Dungeons & Dragons Presents: Invitation to Party,” and more! Woods was announced as the first G4 cast member in November 2020.

WWE and G4 have also partnered for a video game competition series premiering early next year with Woods hosting the yet-to-be-titled program. The new series will pit some of the biggest content creators in gaming against each other to settle scores with actual scores in some of the most popular video games.

Upon Tuesday’s launch, G4 will debut linearly on the channel lineups of Verizon Fios, Cox, and Xfinity TV. The network will also stream on Philo and collaborate with Twitch on a multi-year promotional and commercial partnership through G4’s official Twitch channel. G4 will also continue to create channel-specific content across its social media platforms and YouTube.

G4’s programming slate at launch will include a wide range of content, including new editions of beloved legacy G4 shows, exclusive content, top interviews, and more, including:

* Attack of the Show!: The original geek culture variety show returns with host Kevin Pereira and a brand new cavalcade of misfits. Irreverent and unscripted, Attack of the Show! is a welcoming place for any fan who wants to spend a couple of hours laughing, watching epic stunts and hilarious sketches, and deep-diving into the latest trends of the internet. From hilarious web videos to memes, to streaming of all types, to celebrity guests, to the weirdest tech, Attack of the Show! is still the show that gets it before it gets out.
* Xplay: Xplay used an extra life! The ultimate video game review show returns as a digital-first content brand that balances an authoritative loudmouth confidence with the absurdity of a public-access comedy sketch show, all while (somehow) maintaining enough credibility to book interviews with top industry luminaries. Xplay is expanding the conversation with insightful and irreverent explorations into every game worth your time: AAA, indie, mobile, VR, retro… it’s all on the table. Adam Sessler is back, joined by a group of hilarious experts, to bring a brutally honest voice to the modern gaming scene.
* Boosted: Boosted is a weekly esports comedy series for curious gamers and esports fanatics alike. Boosted is that moment in-game when you realize you’re the worst player in the lobby. We want to revel in the entry-level as we approach gaming and esports as interns guided by our executive-level experts. Boosted will cover the latest trends, news, and tournaments in the esports world every week.
* Ninja Warrior: The quest to summit Mt. Midoriyama returns as G4 attains the exclusive linear broadcasting rights to SASUKE, better known as Ninja Warrior in the United States, from Tokyo Broadcasting System Television, Inc. (TBS). G4 will air all 167 episodes of the legendary competition series that pits heroic athletes of all types, from pro gymnasts, to fishermen, to comedians against a four-stage, formidable, and/or impossible obstacle course. G4 will also present three tournaments never-before-seen in the United States, SASUKE 35, 36 and 37.
* ESL Gaming: G4 has partnered with ESL Gaming, the world’s leading esports and gaming lifestyle company, to produce and broadcast several prime-time esports programs, a first for ESL Gaming in the US and Canada. G4’s exclusive linear broadcast rights make it the premier destination for ESL Pro Tour events including the IEM Katowice 2022.
* Dungeons & Dragons Presents Invitation to Party: Coming off the immense success of D&D Live 2021 featuring notable celebrities like Jack Black, Tiffany Haddish, Kevin Smith, and DrLupo, G4 will continue its partnership with Wizards of the Coast with an all-new, limited-run series to premiere on G4 this Fall. Television’s first program dedicated to tabletop gaming, will bring together a group of comedians and content creators who form an intrepid party of adventurers as they roll the dice for riches, glory, and survival. Viewers who watch during the show’s livestream on Twitch and Youtube will also have a hand in the action as they’ll be able to directly affect gameplay via real-time voting. Outrageous prompts, story beats, NPC characters, and obstacles will be imagined and sourced by our viewers at home (and in-studio), for the DM and Players to execute.

.@AustinCreedWins and @G4TV are gearing up for a huge relaunch event tomorrow night!https://t.co/0H6nOljIxU