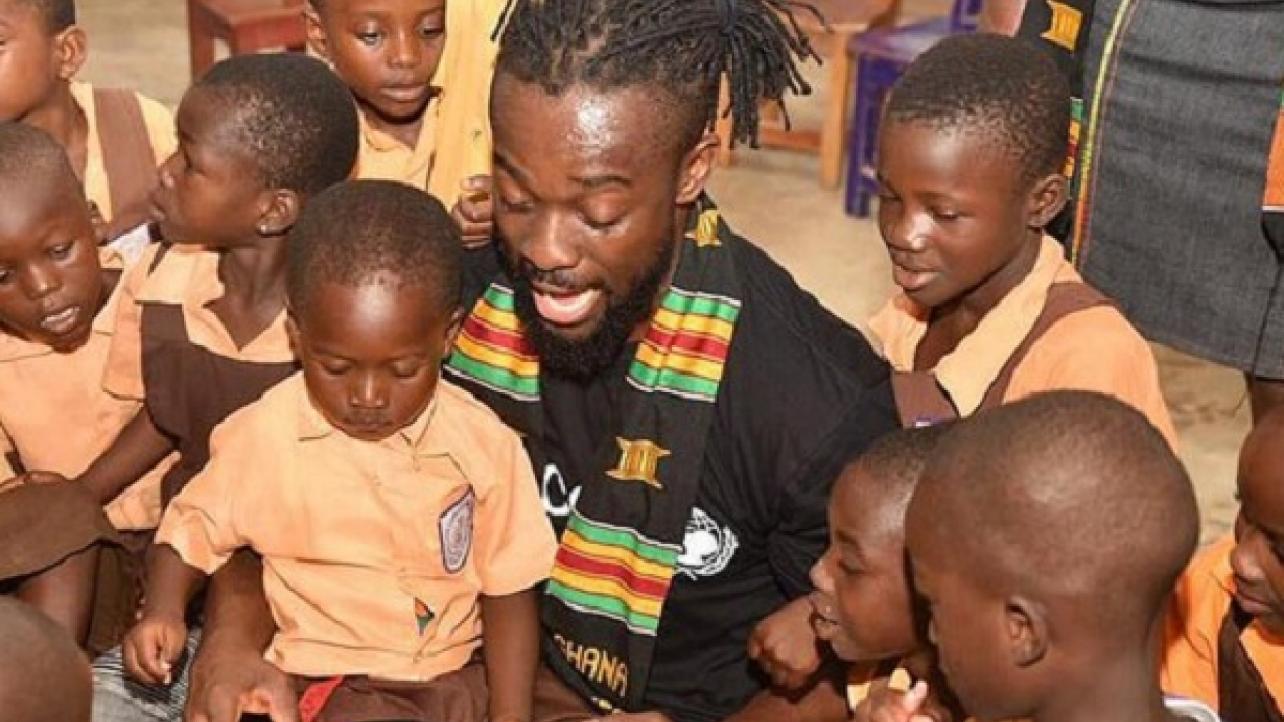 Kofi Kingston: “Becoming WWE Champion Gives Me Chance To Represent Kids Who Look Like Me”

As noted, WWE Champion Kofi Kingston recently did some work with UNICEF and children’s schools during his recent trip to Ghana. In a new interview with Justin Barrasso of Sports Illustrated, The New Day member spoke about his trip “back home.” Featured below are some of the highlights.

On what it meant to visit Ghana as the reigning WWE Champion: “I didn’t know what to expect, but I definitely didn’t expect the reception to be nearly as energetic and wild as it was. The level of elation I felt for coming home made me feel blessed, and it really meant a lot to me to come back home as WWE Champion.”

On what it means to represent people who share similar backgrounds: “It’s important for representation to be prevalent, where someone can look at the screen and see someone that looks like them doing wonderful and amazing things. When I became WWE champion, that was a chance for me to represent kids who look like me.”

On what he represents being bigger than just race: “My story is not just about race, it has transcended race. My story had been one of struggle. Anyone, from any background, can relate to struggling. Having a conflict, not believing you could accomplish your goal, and people holding you down and telling you that you can’t do something; I have been in all of those positions. I’ve had the option of quitting or to keep fighting. I want to set the example for everyone, and that doesn’t matter about race, as long as you’re willing to fight to achieve what you want to achieve.

“I think that’s why people were so happy I won at WrestleMania—my story is much bigger than one race. It’s a story where people of all ethnicities can relate. That’s why I’ve put so much pressure on myself to be the best WWE champion I can be.”

On being champion while Brock Lesnar is the reigning “Mr. Money In The Bank”: “I’m not ruling out Paul Heyman and Brock Lesnar showing up on SmackDown and cashing in. Until Brock actually cashes in his contract, there is always a target on my back.

“That has been the story of my career. I’m not necessarily believed in. But I would love for him to cash in his contract on me, putting me in that David vs. Goliath role. That’s something I would welcome. I want to become the best WWE champion of all time, so I want to go up against the best competition. And Brock is one of the best. Brock is going to have to be up for a fight if he challenges me, but I’d welcome it.”

On a potential title defense against Shane McMahon: “I would love to fight Shane, and I would love to get Vince in the ring, too. I think it’s really cool that Shane is in this role of walking the line of an authoritative figure, but, at the same time, is an active superstar. Shane does some pretty crazy things in the ring, as you see in every single match that he has, so I would love to mix it up with him.”

Check out the complete Kofi Kingston interview at SI.com.

.@TrueKofi aims to inspire people all around the world as @WWE Champion @SInow @JustinBarrasso @UNICEF https://t.co/13JrvSl2Z0

The champ is here! Kofi Kingston got a hero’s welcome at the airport after arriving in his native Ghana for the first time since 1993 pic.twitter.com/cIhTp5fG7I

Kofi Kingston: “Becoming WWE Champion Gives Me Chance To Represent Kids Who Look Like Me”