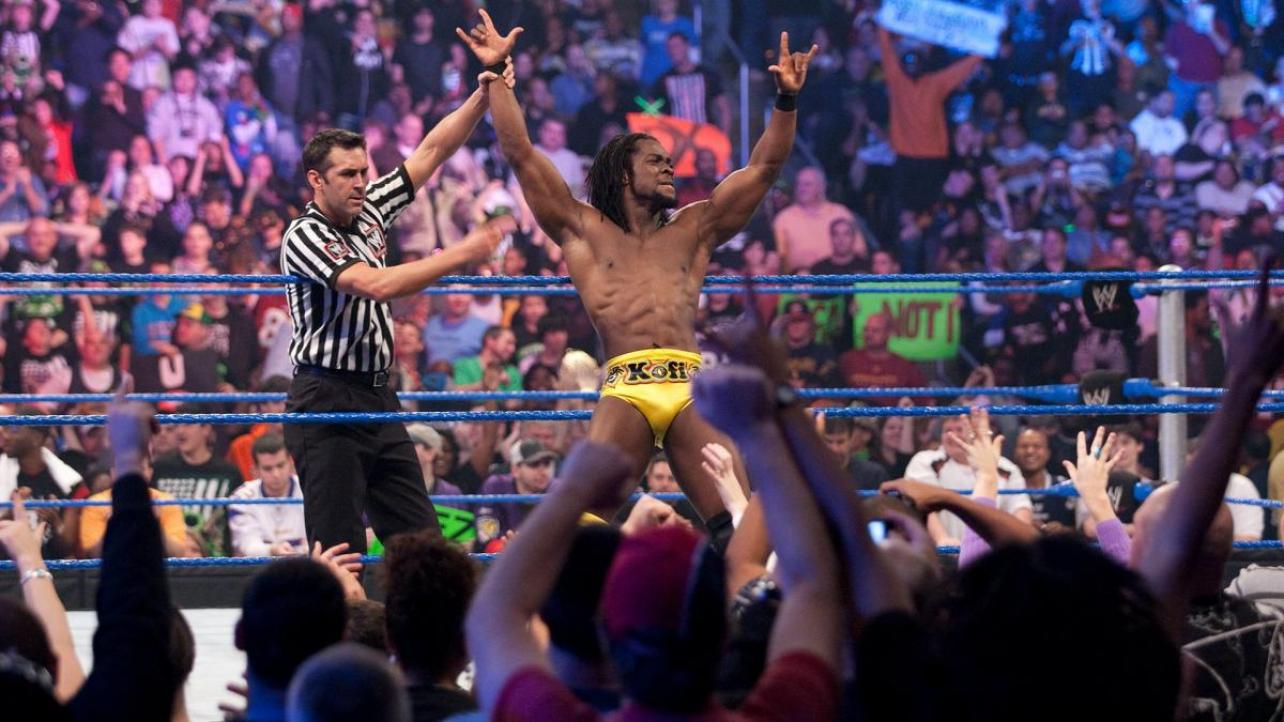 Kofi Kingston recently spoke with Lisa Sanchez from The Buzz Adams Morning Show out of Texas to promote a WWE live event in El Paso. Featured below are some of the highlights from the interview.

On where The New Day’s creativity comes from: “It’s funny, going back, it was three guys just trying to save our jobs. At first there was a time when we would pitch ideas but they said they wouldn’t want to do certain things, but then it just got to a certain point where everything we do now is ridiculous and are just trying to find the line. With Francesca, it was actually right before a promo we had in New York. I think it was around Summer Slam 4 years ago, and Xavier Woods randomly said that he can play the trombone. Me and Big E didn’t even know he could play the trombone. We thought he could play one or two notes, but he said, no, he played in concerts in High School for all four years; so we had asked [WWE Management] if we can do that live and they said sure. The contrast is like, one day we are trying to ask for something standard to only get rejected, and the next we are asking if we can play the trombone and all of a sudden it’s like everything is okay, so we are trying to find things to do to get away with them. Francesca was born, pancakes were born, unicorn horns were born where to the point that they started selling unicorn horns. It’s all about doing something crazy that comes from our minds and where we can draw the lines, but we haven’t drawn the lines quite yet so hopefully there will be some fun stuff coming up.”

On what type of unique merchandise the group might come out with next: “Who knows. Right now, this is kind of like the ‘Pancake Era’ for us right now, so, the next merchandise idea is going to revolve around pancakes. Whether that’d be pancake batter, or a pancake shirt. The guy who makes our pancakes is known as Mr. Bootyworth. We haven’t revealed him yet to the world, so you are getting an inclusive during this interview right now that everyone has been let in on Mr. Bootyworth. We don’t have an idea of where he is going to go, but we don’t know, we will have to wait and see what comes to mind first.”

On his personal favorite, and most difficult stunt he ever pulled off in a 30-man Royal Rumble match: “Honestly, I don’t even like ranking them myself as far as favorite. I just try to come up with new ideas and throw them out there and allow the fans to decide what their favorite is. I think, for me, the toughest was the handstand one; because, if you watch that one, I was thrown out of the Rumble by Miz. My hands are thrown on the ground, but my feet are up in the air, so I am walking around and doing a handstand headed towards the stairs where my feet are on the stairs and they don’t hit the floor. I get a lot of credit now for doing these things, but if you play close attention it is the guys around me that are doing all the work. This year, I just got knocked out of the ring and Xavier [Woods] sacrificed himself and then him and Big E sacrificed themselves and threw me back into the ring. I didn’t do anything on that. I got thrown out of the ring one time by Adam Rose and then I landed on his Rosebuds, which they then threw me back in the ring, so again, I didn’t do anything with that. Another time, I was riding on Big E’s shoulders, so again, he’s giving me a ride, I’m not the one doing any of the work, but I get a lot of the credit, which should mostly go towards those that help me, but they are definitely a lot of fun during Royal Rumble season.”

Check out the complete Kofi Kingston interview at YouTube.com.