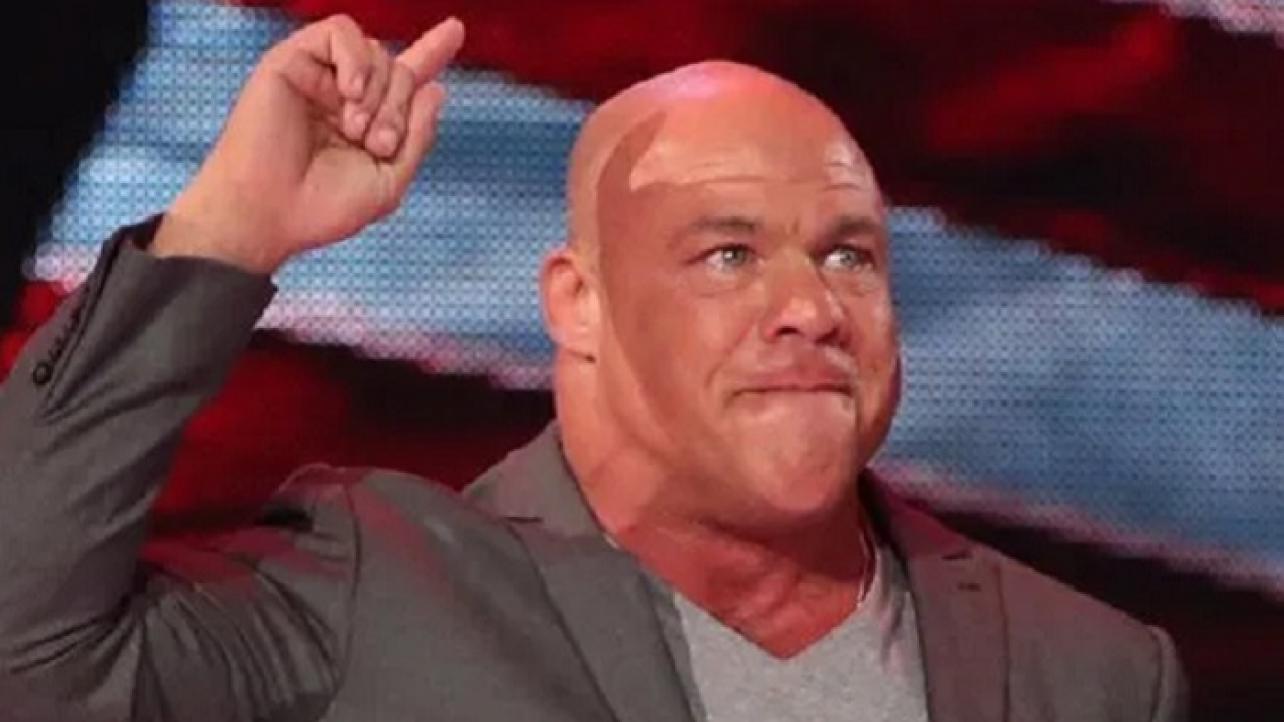 The Kurt Angle Show podcast continues to be a fun trip down memory lane for fans of the WWE Attitude Era.

On a recent installment of the new official podcast hosted by WWE and IMPACT Wrestling Hall Of Fame legend Kurt Angle, the Olympic gold medalist sounded off on some topics related to his rookie year in WWE.

During the episode, Angle spoke about legitimately being knocked out during his match against Triple H and The Rock at WWE SummerSlam 2000 during the infamous Pedigree on the announce table spot, how “The Game” led him through the remainder of the match while he was unconscious and how he dealt with his post-match backstage segment with Stephanie McMahon while still being loopy from the concussion he sustained.

Featured below are some of the highlights from The Kurt Angle Show podcast where the legendary pro wrestling reflects on these particular topics.

On being knocked out during the Pedigree on the announce table spot in the match at WWE SummerSlam 2000 with Triple H and The Rock: “To go back and explain, that was supposed to happen – I was supposed to pretend to get knocked out. I was to be backstage and then come back for Stephanie [McMahon] and help Triple H try to beat the Rock. She wanted me to help, that was the idea. The thing is, it happened for real. I got knocked out, I mean really knocked out. When Triple H went to hit the Pedigree, he goes down, up and down with the timing, so you can time it when you hit, land on the ground. So when he went down, the table broke early and he had my hands, arms trapped behind my back, that’s how he locks it.”

On how Triple H improvised while he was unconscious: “So I landed four feet below, straight with my head on the concrete. And I was out – Triple H was trying to get my attention, I was just out of it. So Triple H improvised, tried to work on me and beat me up a little bit, while I don’t think Rock was out yet.”

On how he had to keep asking Stephanie McMahon what his next line was for a promo: “The Rock came out and they wheeled me back. I was supposed to be wheeled back, and we were supposed to do a pre-tape backstage. Stephanie says ‘Kurt can you go back out there, you gotta help me!’, and I had to say ‘only for you Steph, I’ll do it for you’. Problem is I got knocked out, and when I had to do the pre-tape, Stephanie would tell me what I had to say and I would say ‘okay’, and 30 seconds later I’d say ‘what am I saying again? I don’t know what I’m saying. I couldn’t compute what I was going to say, I couldn’t remember. So it was a complete nightmare. I don’t remember any of it. But the match came across really good, the outcome was Vince thought I hit a homerun that day.”

Check out the complete episode of The Kurt Angle Show podcast via the video embedded below, or by visiting YouTube.com. H/T to Inside The Ropes for transcribing the above quotes.