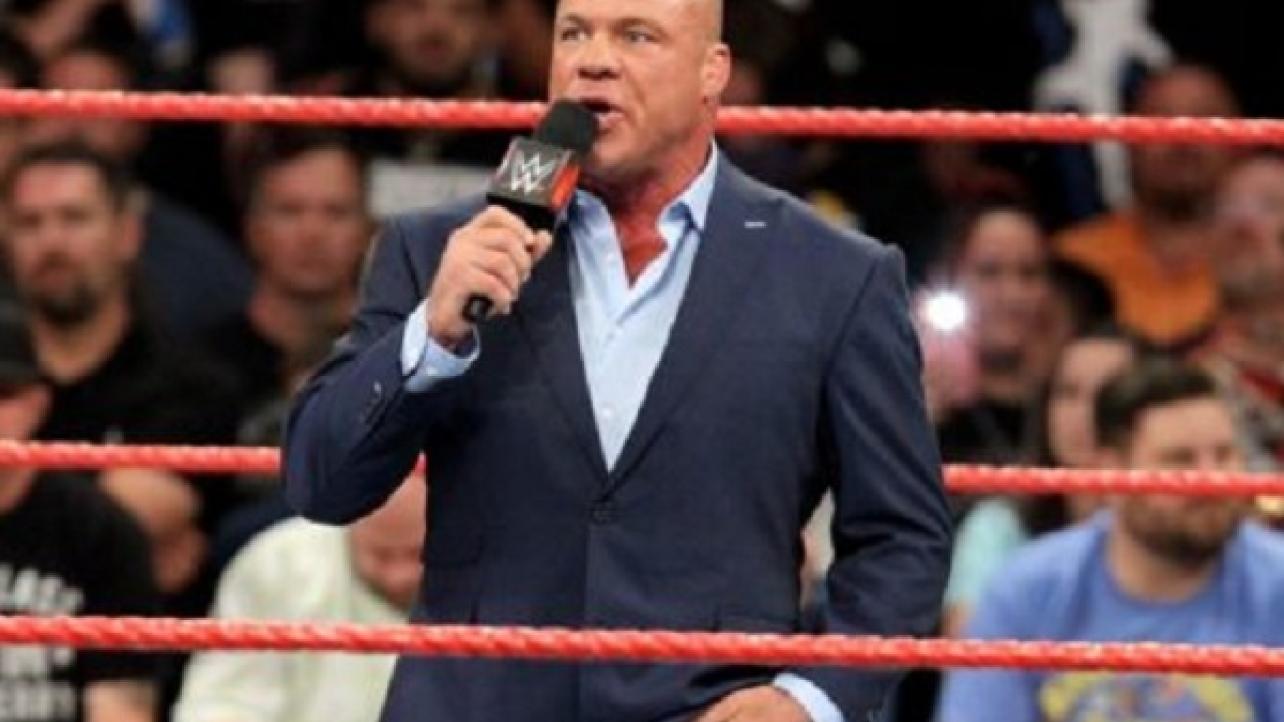 WWE Hall Of Famer Kurt Angle took part in a Q&A while at an appearance at iPlay America in Freehold, New Jersey this past weekend. Below are some of the highlights.

On Jason Jordan: “I can’t believe I’m saying this. (laughs) You know this was a big prank that Vince had. I looked at him like you’re serious? When did I get her pregnant, in college? And she was black? The joke is on me but honestly, I’m not going to lie to you, I really hope that this storyline turns into a match with Jason. Whether you like his character or not, you can’t deny that he is right now one of the top three best wrestlers in the company. [fans jeer] Watch him perform, watch him perform. He’s up there with AJ Styles. He has a different style, but you will see Jason Jordan as world champion eventually. I know that people can’t stand him right now and I’m not sure if it’s because he’s my son, but his performance in the ring, it doesn’t get much better than that.”

On working with Shelton Benjamin and Charlie Haas behind-the-scenes: “The crazy thing about that is because I broke my neck, that whole faction never had a chance. I wish we could have done it for a few years. I didn’t really get to know Shelton and Charlie that well. The faction only lasted six months. It was horrible. It really sucks because we could have done a great job with Team Angle. They were both incredible and I take part of the blame for them not growing the way they could have as wrestlers. I know Shelton kind of broke out and got a little bit bigger than Charlie, but they should have had much better careers and I take part of the blame for that.”

On whether or not stories of wrestlers “walking out” to avoid losing matches are true: “I started watching after I met with Vince and these wrestlers looked like incredible athletes. I became a huge fan of ‘Stone Cold’ Steve Austin. He was the reason I called WWE back up in the end of 1998. I said listen, I want to be that guy. (laughs) For him, it wasn’t about winning or losing. If he was going to lose, there had to be a good reason. I understood that. Steve didn’t have an ego – he wouldn’t have a problem losing to the right guy. He was always right about that. Another guy that didn’t have a problem losing was The Rock. He always did business. Shawn Michaels, I remember at WrestleMania 21 (applause) Vince didn’t have a winner. He left it up to us. Shawn said ‘well, you know, you win because you’re going to have a program with Dave Batista next so I want you to look good in this match.” I was like, wow. He didn’t have to do that. I thought that was really cool of Shawn.”

Check out more highlights from Kurt Angle’s Q&A at TheWrestlingState.com.