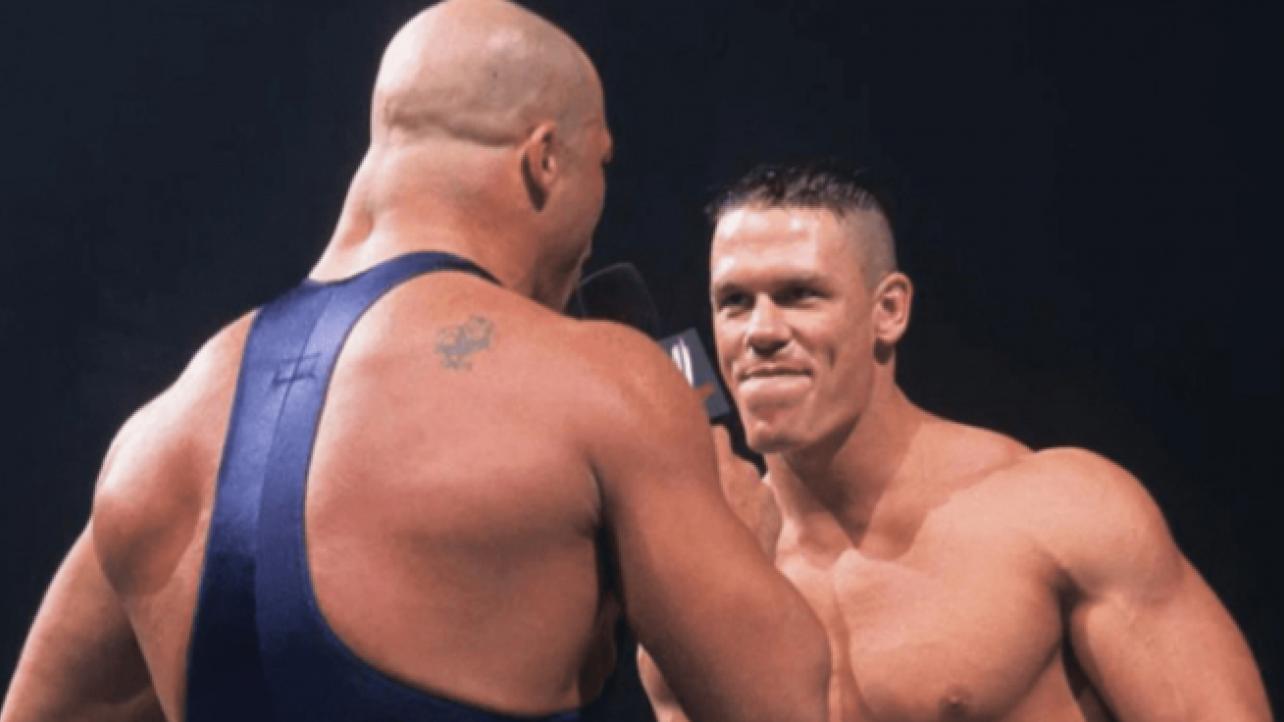 WWE Hall of Famer Kurt Angle recently took to his The Kurt Angle Show podcast, where he discussed how it was a really proud moment for him to be inducted into the WWE Hall of Fame by John Cena and why he believes Cena is the greatest WWE superstar of all time.

“I heard that Steve wasn’t going to be available but I wanted to give out my choices: Undertaker, Cena, and Steve Austin.” “Any of those three, I would’ve loved to induct me. John was great because what I love about John is, I consider him the greatest WWE superstar of all time. He’s won 15 WWE World Titles, the only person in history to do that.”

“He has a great look, what he’s done for the business, he’s stayed clean, he hardly ever got injured, he was consistent, he had a really long run. John Cena, I consider him the greatest WWE superstar of all time and it was a really proud moment being inducted by him. John was a really well-spoken, very intelligent person.”

Kurt Angle also talked about only being told two nights prior to RAW that he would become the General Manager and how he would have hoped that they gave him a heads up and told him earlier than they did, but WWE Chairman Vince McMahon made it very simple for him by re-introducing him to the fans since he was gone for 11 years.

“You would think so, you would think they would call me right away and say Mick Foley is going to have his hip replaced, we need you as the GM. No, they didn’t do that.” “They waited until they inducted me in the Hall of Fame, Hall of Fame night, the night before WrestleMania, and that night, right before I went out to do my speech, Vince McMahon came in and said, ‘hey, we’re going to have you be the GM of RAW starting tomorrow.’ They could’ve told me when Mick Foley had to have his hip replacement, they didn’t tell me till the very last second. I knew the day before I was GM that I was going to be the GM.”

“Vince made it very simple for me [that night on RAW], he basically introduced me, I came out and said, ‘Kurt Angle is back, oh it’s true, it’s damn true,’ that was all I said. Vince just wanted the fans to know I was the new GM and he wanted to get the fans excited about it. He wanted to re-introduce me to them because I was out for 11 years.”

Kurt Angle then talked about first meeting WWE Chairman Vince McMahon after 10 years and how they put everything behind them and decided that they were going to forgive each other and start fresh.

“It was redemption.” “We put everything in the past and we decided that we were going to forgive each other and start anew. Vince was great, he really embraced me, and told me he loved me like a son, but he did say, ‘Kurt Angle, you were a pain in my ass.’ He did tell me that and I was a pain in Vince’s ass. Especially right before I quit. It was a great meeting and it was like we never had that fight, it was like none of that ever occurred, business was as usual.”

You can check out Kurt Angle’s full comments at this link. H/T to Wrestling Inc. for transcribing the above quotes.