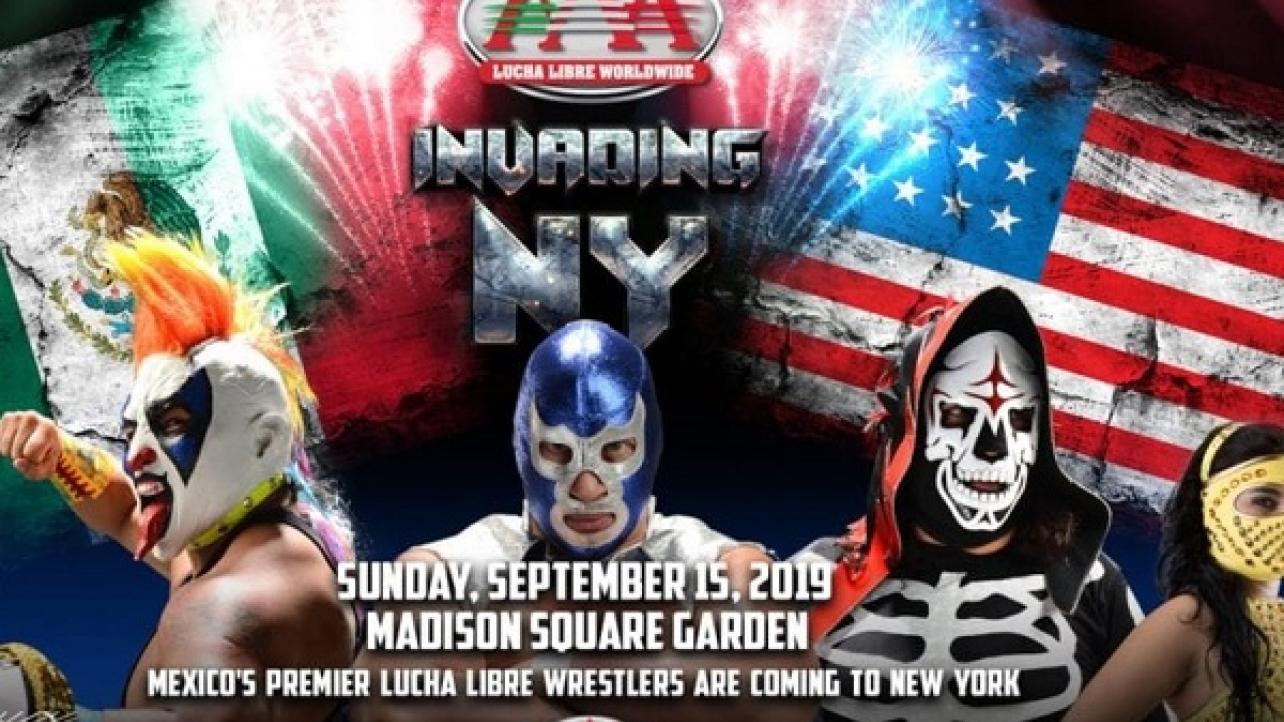 The promotion released the following press release this week, which also includes the official announcement of new matches for the show:

These match-ups will also continue at the “Invading LA” event scheduled for Sunday, October 13, 6 p.m. at the Forum in Los Angeles.
The key match-ups scheduled for “Invading NY” include the popular Reina de Reinas (Queen of the Queens) Championship between the current reigning champion, Tessa who defends her title against former champion, Taya. Another is a grudge match featuring two AAA legends, Blue Demon Jr. vs. Dr. Wagner Jr. The two will face off to see if Blue Demon Jr successfully retains his mask, or if Dr. Wagner Jr. wins the bet to keep his hair.

“We are thrilled to bring the most popular Lucha Libre legends to fans in the Hulu Theater at MSG,” said Dorian Roldán, Director General of Lucha Libre AAA. The New York event has moved to the more intimate Hulu Theater at MSG from the main arena. Roldán added, “We want to ensure the quality of the experience for our New York area fans and the Hulu Theater offers the kind of setting in keeping with many AAA extravaganzas. Every seat is up close to the action and less than 177 feet from the ring, so our fans will have the kind of exciting, personal experience they expect from AAA.” Current ticket holders for “Invading NY” will be guaranteed a new seat assignment of equal or greater value than the seat they already purchased.

Tickets are now on sale for both the New York and the Los Angeles events and may be purchased at the box offices or online in Spanish or English at www.luchalibreaaausa.com, or at ticketmaster.com, or msg.com.

Both events will be available live PPV worldwide on FITE through streamed video on demand via iOS, Android mobile, Apple TV, Android TV, ROKU, and Amazon Fire, or from all cable and satellite TV providers on pay-per-view.

About Lucha Libre AAA
Considered as the top Mexican leader company in Lucha Libre production and promotion, with a presence of 27 years in the entertainment industry, AAA was founded in 1992 by Antonio Peña Herrada. AAA produce international events in several countries including México, United States, Canada, Colombia and Japan. Among the innovative milestones of the franchise are the animated movie “Sin Límite de Tiempo” and the videogame known as “La Lucha Libre Héroes del Ring”, specially designed for Mexican consumers. AAA as a Live Touring company has more than 600 events a year, generating more than 260 hours of content for a captive and recurrent audience, with more than 100M viewers and enthusiasts tuning AAA shows on TWITCH, TBS´s SPACE Channel, TV Azteca, MultimediosTV, Facebook Watch, YouTube and PLUTOTV. Roshfrans, UNEFON, Glaxo, Lala and Everlast, are blue chip sponsor brands present in Lucha Libre AAA. For more info please visit www.luchalibreaaa.com