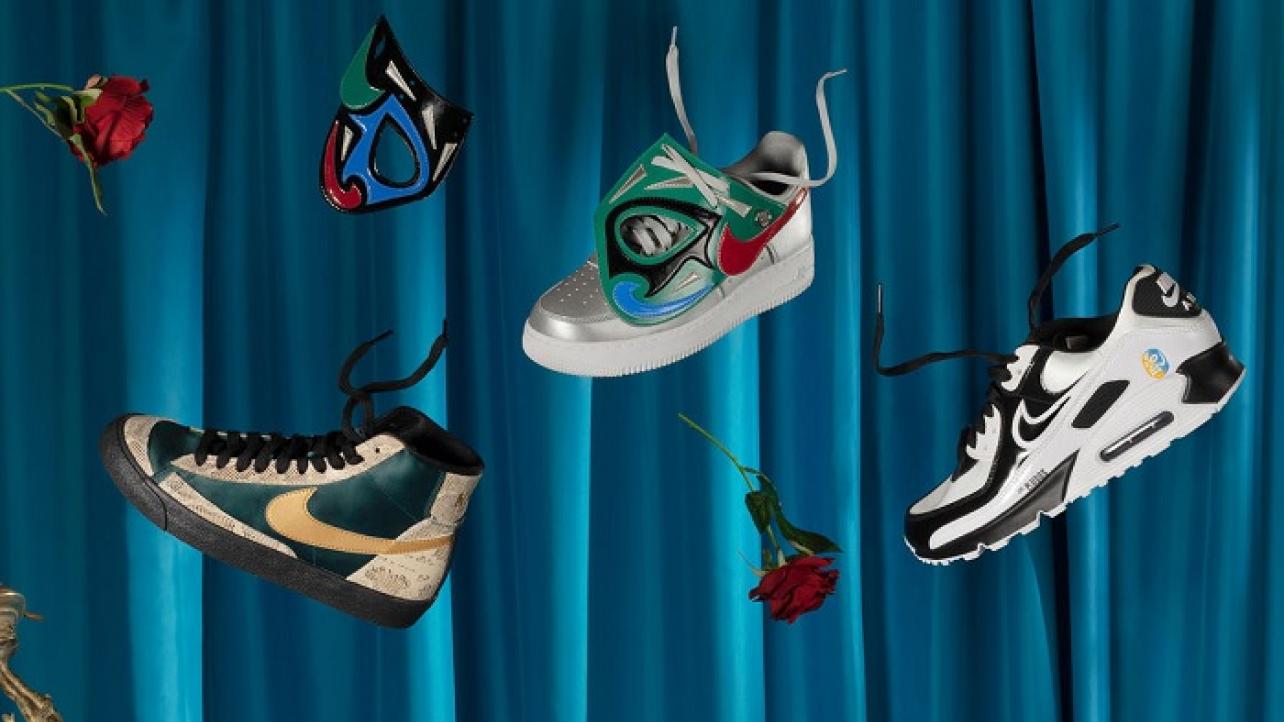 Nike issued a press release this week to announce a new Lucha Libre Collection of footwear and other athletic gear.

Step Into the Ring With the Lucha Libre Collection

September 09, 2021 – In this corner: A new Lucha Libre footwear and apparel collection inspired by the fabled wrestling culture, complete with loud masks, boisterous costumes and a dose of showmanship.

The footwear blends exotic leathers and rich textiles to create fun detail applications. The collection’s Air Force 1 comes in a metallic leather upper with a removable synthetic mask on the left and right shoe, forming the left and right eye slots. The Blazer has a satiny woven upper, faux snakeskin paneling, and lacing inspired by the back lacing of a wrestling mask. The gold is a take on boots worn by luchadores in the golden era of the 1950s and ’60s. The Air Max 90 comes in a bisected black and white color scheme, a nod to famous Lucha Libre rivalries pitting good against evil, or “Los Técnicos vs. Los Rudos.” The vamp comes in a textured woven material, and the mudguard in patent leather.

The apparel silhouettes include two styles of hoodies and a t-shirt, featuring graphics and material treatments borrowed from Lucha Libre culture, including masks and posters.

The designs are created from a serious respect for observation that is at the heart of Nike GEL (Geo Express Lane) products. The folkloric ensemble of masks and costumes forms a true artistic tradition in Mexican culture; in Mexico City, Lucha Libre is considered an intangible cultural symbol, bringing people together.

“We see sharing cultural expressions as a way of creating relationships,” says Carlos Hernández, Mexico City Merchandising Director for Geo Express Lane. “When you’re deeply invested in a culture, you share its passions and interests. By paying close attention to Lucha Libre tradition, we get to use footwear and apparel to share a piece of Mexican culture with the world in places like Seoul, Tokyo, Brazil and more. With a number of Mexico GEL collections releasing soon, we’re creating the product with that same imaginative focus on cultural detail.”

The apparel borrows from wrestling lore, adding graphics and material treatments pulled from luchador outfits and paraphernalia, like posters. The silhouettes include two styles of hoodie and a t-shirt.