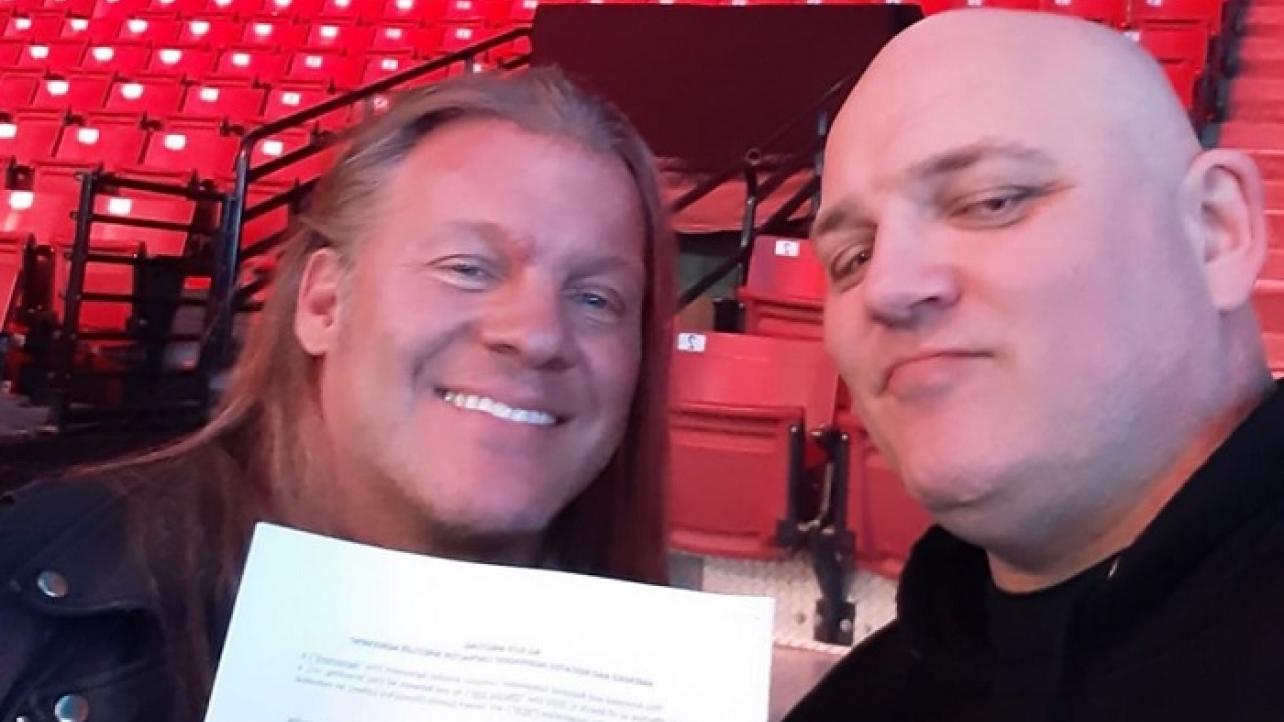 Luther Talks To Chris Jericho About Being Close Friends For Years, Admits He Thought AEW Offer Was A Rib

Chris Jericho’s longtime close friend and peer in the pro wrestling business, Luther, recently appeared as a guest on the official podcast of “Le Champion” for a special two-part interview with “The Demo God” of All Elite Wrestling.

During his interview on Talk Is Jericho, Luther and Chris Jericho spoke about being longtime close friends.

Additionally, the Chaos Project tag-team member discussed his original belief that the offer he received to sign with AEW was a rib, as well as his negotiations years ago with the now defunct World Championship Wrestling (WCW) promotion.

Featured below are some of the highlights of the new Luther two-part interview from Chris Jericho’s “Talk Is Jericho” podcast.

On how he initially thought the AEW offer was a rib: “I was actually speechless. I remember when they offered me the contract, I thought they were ribbing me. Daniels and Cody took me into a room. I thought I was getting fired. Well the thing is, I thought it was over something else, like I thought I was gonna get let go or whatever. I’ve had that, ‘Hey, can you come and see us’ or whatever. So I go in there, and I’m like, ‘Oh my god, this is not gonna be good,’ and I get a little anxiety once in a while, and then my brain starts going crazy. And I’m like, ‘Oh, this is not good.’So I go in there, and yeah, they offered me a full contract or whatever. And I was just sort of sitting there, didn’t know what to do or what to say but they were looking at me and kind of smiling so I thought they’re ribbing me. And so I said, straight up , I was like, ‘Are you ribbing me?’ And Cody, that’s why I asked him, like we rib a lot, and so Cody’s like, ‘No, no,’ and I was like maybe he doesn’t rib because I don’t know. And so then I was like speechless, and I probably didn’t act like I would have in my head where I’d be like, ‘Yeah…’ Yeah, I was trying to be all cool, but I was also like, ‘Oh my god.’”

On nearly signing with WCW years ago: “”So then WCW, I go and I think it went so so. I wrestled, well I did a couple shows, you know how they have you sometimes as like security guys, backstage talent or whatever, so it was cool. You still get to make a payday. But then I’m wrestling in Colona against Vampiro, so I talked to him the day before and he was not super cool. He was pretty drugged out, in my opinion, I’m not a drug counselor, obviously, I should be but I don’t know. I even was super nice, I was like, ‘Hey,’ because he wrestled in UWR, ‘We’ve worked for the same companies in Japan and just wanted to say hi because we’re working tomorrow,’ whatever. And I always feel like I get along with people in the dressing room. And he’s just being a dick, like he didn’t like you and so I noticed a couple people, people that had heat with you then had heat with me right off the bat. And I was like, whatever, dude. So we go over the match, it’s on TV. It was the very last Worldwide, so we go out and we have all this stuff but then he’s like kinda no-selling my s— and I’m selling all his stuff, and then it’s time for me to do stuff and he’s like, ‘No, we gotta take it home.’ But then that day before, he comes up to me before the matches, and he’s like, ‘Hey, I just want to apologize, like I didn’t know who you were yesterday and then people were telling me And yeah, you were big in Japan, and just sorry for how I acted.’ I was like you’re a d—, I don’t really care.’ So that’s how that went, but then they said, ‘Oh yeah, you did really good, and we’re looking to maybe offer you a contact,’ or whatever. And I was like, ‘Holy shoot, that’s really cool.’ And so then they’re talking about the deal which sounded really awesome, it was like three years and I wanna say like 130 and then 210 and then 3-something, it was crazy. It was awesome money. But WCW’s throwing money around big time and I was just like, ‘Holy s—, that’s a game changer’, even to this day’s standards that would be good. And so I was like, awesome. So they’re talking about, ‘Oh, your work permit,’ and I was like, I don’t, I was still living in Canada at the time. And I was like, ‘I don’t have a work permit.’ And they’re like, what? And at the time my girlfriend was from America, and I was like, ‘Well my girlfriend’s American’ They’re like, ‘Oh, you’re not married? You should marry her.’ And I was like, ‘Um I don’t want to do that just to get there,’ and even that takes time, they don’t just give it to you. And I was like, ‘Well, I don’t have a thing,’ and so they start to pull this paper back that was on the ground. [It fell off the table.] Everything is pulled back, and then this other guy, I don’t even remember who he was, he must have been the lawyer,. And he said ,’Well tell you something, we’re not really telling people, but we’re not signing people we have to get permits for because we’re actually going out of, like we’re selling.’ So I knew they were selling to WWE before everyone else did. So if I would have had my American visa at the time, then I would have got signed. But I didn’t yet. I didn’t get a work permit ’til a couple years later.”

Check out the complete two-part interview with Chaos Project member Luther from the Talk Is Jericho podcast hosted by Chris Jericho by visiting WestwoodOnePodcasts.com. H/T to Wrestle Zone for transcribing the above Luther interview quotes.

Luther Talks To Chris Jericho About Being Close Friends For Years, Admits He Thought AEW Offer Was A Rib