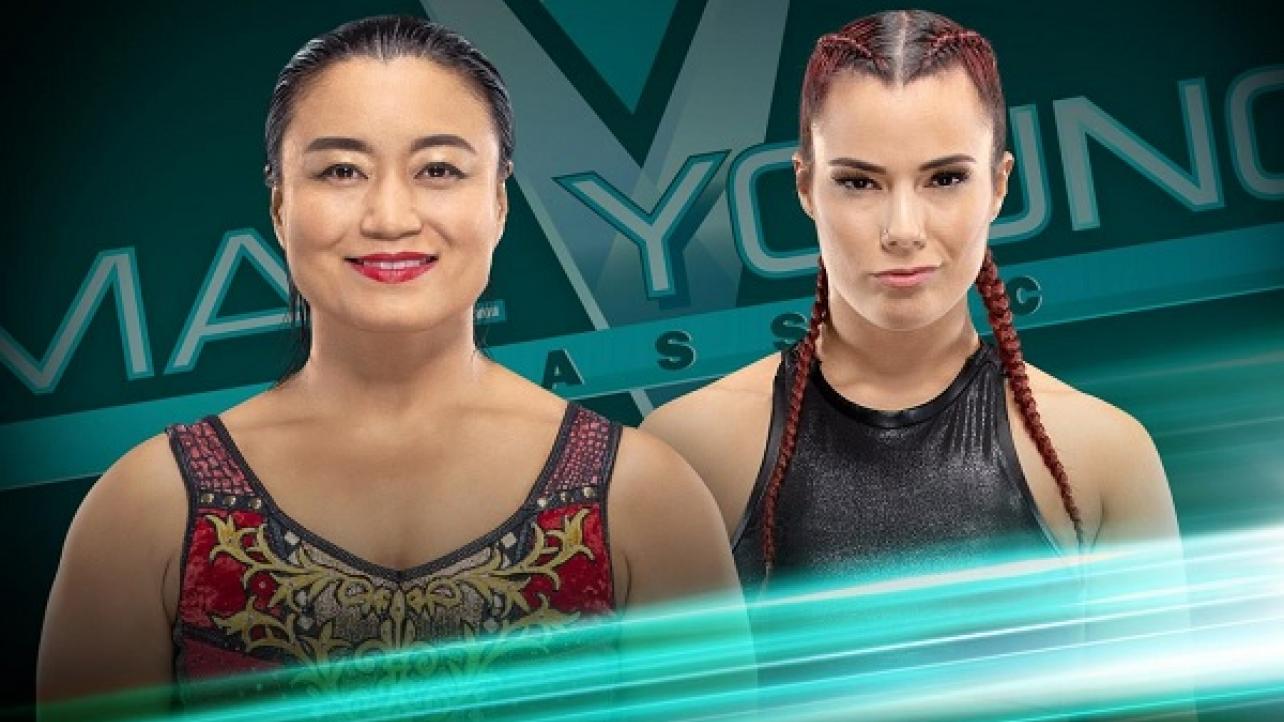 It’s that time of the year!

The Mae Young Classic returns with their first episode this evening. WWE.com released the following preview for tonight’s show:

Can Killer Kelly knock off the iconic Meiko Satomura?

If you think the word “legend” is thrown around too loosely, just know this: Meiko Satomura, the 23-year ring veteran who faces Killer Kelly in the opening round of the 2018 Mae Young Classic this week on WWE Network, is, by any standard, a true legend of the ring.

A master of “Joshi Strong Style,” the dangerously skilled Satomura looks to show the world what all the hype is about when she steps in a WWE ring for the first time in her decorated career. Hoping to rain on her parade, however, will be double-tough NXT UK Superstar Killer Kelly of Portugal. Kelly knows all too well that a victory against Satomura wouldn’t only propel her to the Second Round; it’d instantly establish Kelly as a force to be reckoned with.Can Killer Kelly notch the biggest win of her career against the final boss of Japanese women’s wrestling? Or will Satomura move one step closer to adding the Mae Young Classic trophy to her long list of accolades?

Wales’ Tegan Nox flies back into action against Chile’s Zatara

After a torn ACL kept her out of action in last year’s Mae Young Classic, Welsh sensation Tegan Nox looks to make up for lost time when she makes her WWE Network debut against Chile’s Zatara.

Nox, aka The Girl with the Shiniest Wizard, is renowned for her match-ending knee strike, the Shining Wizard. Although the native of South Wales boasts an impressive high-flying attack to go along with her vicious strikes, Zatara may be one of the few competitors in this year’s tournament who can match Nox’s hard hits and aerial offense. The masked luchadora is also unrepentant when it comes to the tactics she uses, subscribing to the belief that the end always justifies the means.

Which competitor will advance to the Second Round? Find out when Mae Young Classic streams on WWE Network this Wednesday at 9/8 C.

David vs. Goliath comes to life as Lacey Lane collides with Vanessa Kraven

It’s hard to imagine Lacey Lane drawing a more daunting opponent in the First Round than “The Mountain” Vanessa Kraven. Simply put, the ill-tempered powerhouse from Montreal is everything that Lane isn’t.

Standing 6-foot-2, Kraven has the obvious reach and strength advantage over the 5-foot-2 Lane. And whereas Lane, a product of The Dudley Boyz’s wrestling school, has competed professionally for less than three years, The Mountain brings more than a decade of ring dominance to the tournament. Yet, for all the size and experience she gives up to the hard-hitting Quebecois, Lane brings a thrilling, daredevil in-ring style that has already earned her an NXT contract.

Can Lane rise to the occasion in her uphill battle against The Mountain, or will Kraven chop down Lane en route to progressing to round two?

After making a splash in the inaugural Mae Young Classic, Australia’s Rhea Ripley returns to tournament competition to face new NXT signee MJ Jenkins in the First Round.

Ripley has undergone a severe attitude change since last year’s event. Gone is the smiling, excitable Superstar who was just looking to make a good impression. She no longer tries to hide her surliness or her sneer. The audacious Aussie has always been athletic, but now she pairs her freaky strength with a mean streak, trashing opponents like they’re somebody’s unsuspecting uncle who just stumbled into a mosh pit.

In contrast to Ripley’s rough and tumble ways, Jenkins is smooth and sleek inside the ring. A protégé of WWE Hall of Famer Johnny Rodz, Jenkins is a colorful and charismatic burst of energy, and nothing would kick-start her WWE career quite like winning the Mae Young Classic.

But to accomplish that, of course, she must get through Ripley in the First Round, streaming this Wednesday on WWE Network.