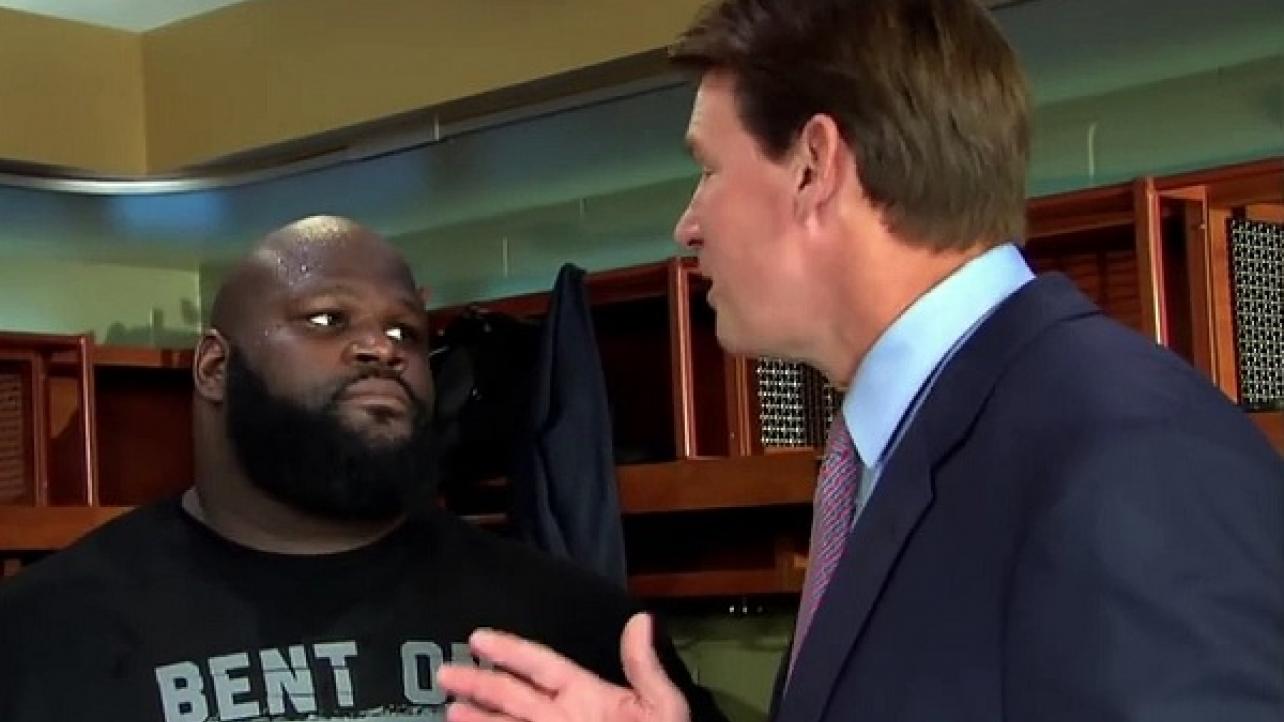 During the discussion, Henry spoke to “Good Ole’ J.R.” at length about the late Owen Hart’s reputation behind-the-scenes in WWE during the early part of his career, being convinced not to beat up JBL in a shoot fight one time, his high praise for one-half of the WWE Women’s Tag-Team Champions, Bayley, and how SmackDown Women’s Champion Asuka reminds him of WWE Hall Of Famer Bret “The Hitman” Hart.

Featured below are some of the highlights from the Mark Henry interview, as well as the complete audio archive of the full episode of “The Ross Report” podcast featuring “The World’s Strongest Man.”

On the late Owen Hart’s reputation behind-the-scenes: “Owen Hart [was] classic. I loved Owen. Owen Hart is one of the few guys, Mark, I’ve been in the [professional wrestling] business since 1974 [and] he is probably in one handful of guys that I can honestly say I’ve never heard any of the boys knock, or diss, or say anything bad about and that’s highly unusual.”

On Owen talking him into not beating up JBL in a shoot fight: “I was having a disagreement with a wrestler that we both know and love and I wanted to fight. And I think I told [Ross] that I wanted to fight him. I didn’t want to get fired. I was like, ‘I’m going to beat him up and don’t fire me.’ And [Ross] was like, ‘well, if you beat him up, I will have to fine you and I may have to fire you.’ And I’m like, ‘well, s–t. I can’t win!’ Owen came up to me and said, ‘listen, don’t get mad. You get very entertaining when you get angry. I like to see you angry too as long as you aren’t angry at me.’

“I realized I was putting a show on and me fighting somebody that’s my peer would not be good. It wasn’t going to look good anyway. And this guy, by the way, was the artist formerly known as Justin ‘Hawk’ Bradshaw and I just wanted to whoop him and Owen said, ‘don’t do it.’He said, ‘the next time you see John by himself, just walk up to him and say, ‘John, I don’t appreciate you picking on me and I wish you would stop.’ And if he says he won’t stop, then you just tell him, ‘well, the next time that I see you by yourself like this, nobody’s around, I’m not going to be screaming and yelling. I’m just going to take the opportunity to let you know that I don’t particularly like it and it might not be with words.” And he taught me how to communicate and I love that dude. He was my brother because he helped me keep my job, one. He taught me how to relate to people in the locker room and nobody got hurt. That’s a lost art and there needs to be more Owen Harts in the locker room.”

On Bayley being the best female wrestler in the world and advice he gave her: “There’s not one ugly woman in that locker room. Not one. I mean, but on skill level, they’re about as skilled of a group of women wrestlers that there ever was at any time in history. Bayley can go up against any woman any night of the week. She’s good, real good, double good. And I remember when she came in, I was like, ‘I know you taught a lot of these girls how to work, but I don’t want you to go in there and look like a coach or a teacher. I want you go in there and try to rip their face off. Like, go and be you. Like, you can respect them, but you’re not going to ever get over if you just go out there and want to do, do, do. You’ve got to take a little bit and you’ve got to make people understand, feel your pain, and celebrate with you, and have that emotional tie to the audience.’ But she didn’t have it at that time, but the light switch flipped in her and still, for your money, man, Charlotte [Flair], and Becky [Lynch], and Sasha [Banks], and the list goes on with the girls, but I’m still going to hang my hat on Bayley. She’s an unbelievable talent.”

On comparing Asuka to Bret Hart: “[Asuka is] very underutilized. She’s as special as Bayley is and more aggressive, actually. And I love her work and I’ve never seen her bloody [anybody’s] mouth. She is talented! She’s like Bret Hart in the sense that for all the striking and stuff that she does, I don’t see bloody teeth.”

Check out the complete episode of The Ross Report podcast featuring Jim Ross’ interview with Mark Henry below, or at Omny.fm.