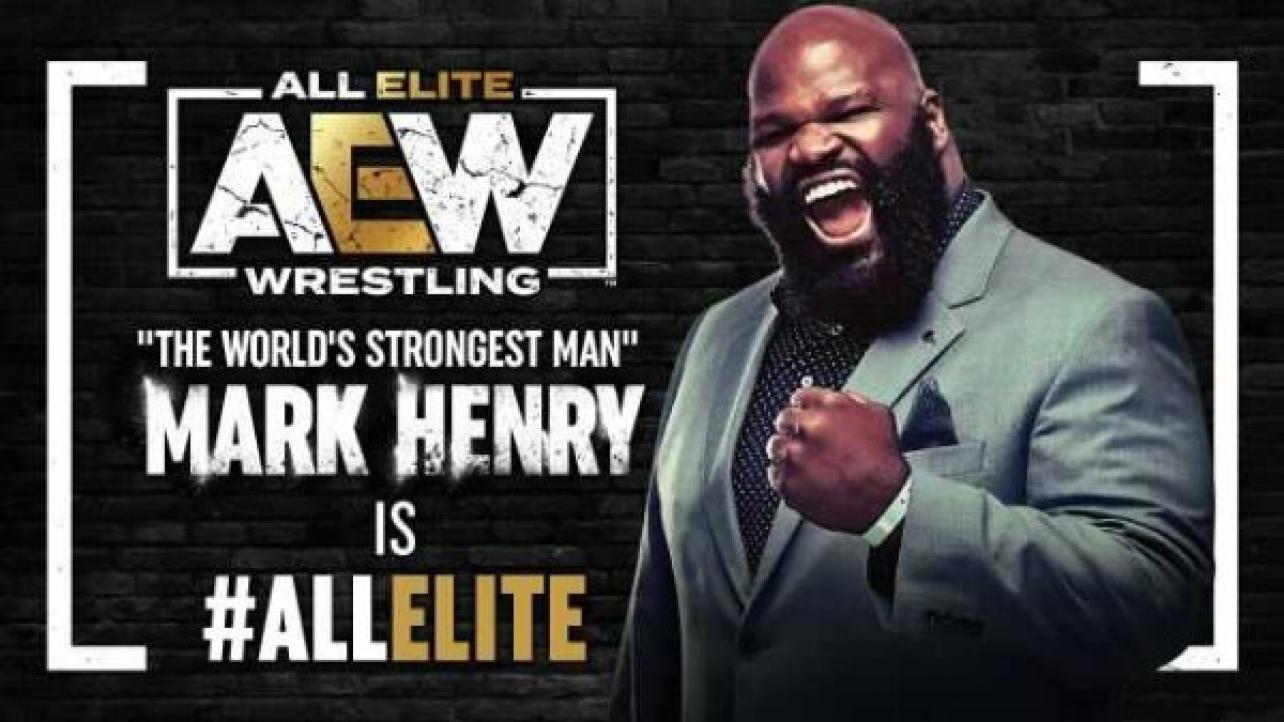 At last Sunday night’s AEW Double or Nothing event, former WWE Superstar Mark Henry made his first “All Elite” appearance with his new brand. After the show, Henry took to Busted Open Radio, where he discussed his reasons for jumping ship. Mark also revealed a few of the details of his conversation with WWE Chairman Vince McMahon, as well as much more. Check out the highlights.

On making the move from WWE to AEW:

“My deal was up. This is not something that was recent. I can go back to five months? Six months? I wanted a position in the office and I wanted everything that comes with it. And I talked to Vince himself. And he said ‘write it up. You’re somebody that I’ll hear from, I’ll listen to.’ And I was told there was a lot of cleaning house and there was a lot of cuts that were happening. There was a lot to come. I’ve seen hundreds of people in the company go. I still felt like ‘Well, knowing this, I feel valuable enough that I’m not going anywhere. So that’s cool.’ But when you’re deal comes up, and the rights, the legality part of it comes up to where you’re going to go next and what you’re going to do, I felt like I wanted to do more. I always wanted to do more. You know me, I’m a busybody. If I’m not doing what I know I can do, especially if I feel I can do it better than somebody else. If I can’t get that opportunity, I have to start looking for that somewhere else. And I did.”

On the conversation he had with Vince McMahon about leaving:

“It wasn’t negative. Everybody knows me and Vince got love for each other. And more than love, respect. Me calling him and saying what needed to be said came from a place of like, a brother telling his older brother, ‘Man I’m tired of being in the shadows. I feel like someone beneath you is holding me back. And if somebody’s holding me back, I’ve got to go.’ Cause you can tell everybody what to do, but there might be something that comes with that. I felt like I’m being held back, I’m not getting what I want. I want to be successful. You know I want to be able to learn more, I want to get those pelts on the wall… And man, it was just like the coolest thing. He was like ‘man, you know everything you need to know. You go and if you feel like you need to go, (I) don’t necessarily want it, but if you feel like you need to go, then go. I know you’re going to be successful.’ That’s what you want. I’m not going to run from a conversation like that. There’s a lot of people that are kind of scary and unloyal or whatever. Nobody will ever say Mark Henry is unloyal. I’ve been loyal. There were times where I was offered more money and I didn’t leave. Twenty five years, with the same company, through the good and the bad, I was there. Everything wasn’t perfect, but what family has a perfect existence? Not very many. But mine was really good. I had a really good experience, I learned a lot. I spent more time in the production office and in the trucks than I did around the ring and in catering. I always had an executive mindset.”

Explains his focus as a part of the AEW brand:

“Talent wise and the way that the show flows and the high flying has brought in the young people. And the way that you bring in the older demographic is you use the old school way, the grass roots way. We’re going to have to be in the newspapers again. We’re going to have to reach out to the communities we serve. All of the arenas and all the shows that we do, there’s going to be a presence in the local media. TV, newspapers, any way we can get attention in that town. And the way you do that is, if you’re on the six o’clock news before the show starts, you have to have representation reaching out to the community saying ‘Hey, we have the Boys and Girls Club kids here. We’re going to bring them in and have a good time, eat popcorn, drink colas and have a good time… And you’re going to have to support the Special Olympics. You’re going to have to support local things that are important and pertinent to those communities, to get them to say ‘you know what? Man I’m going to have to tune in and watch these guys.’ That’s what older people do. So we’re not going to change the direction and go away from the younger movement. I’m still kind of a boomer, I’m not out there in the streets like when I was younger. So I don’t know all the terminology and everything that the kids are doing these days. But I know what the old people do. And that’s where I’m going to put my focus.”