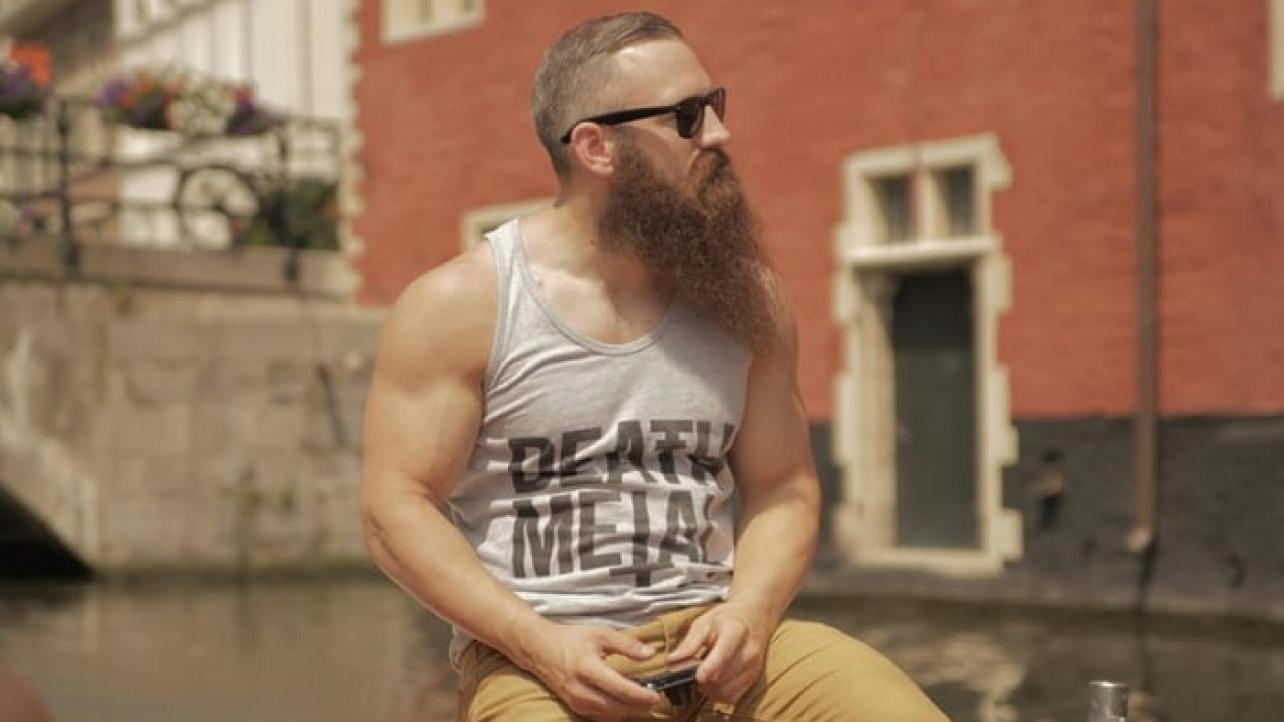 During the discussion, the MLW star spoke about the MLW Middleweight Champion Tajiri, the importance of ECW to his career, beating MJF at the ALL IN pay-per-view and more.

Featured below are some of the highlights, as well as a complete archive of the interview.

On MLW Middleweight champion Tajiri, and the importance of ECW to his career: “I mean, from a personal standpoint, ECW was everything to me. The only reason we’re having this interview, the only reason I’m involved in professional wrestling in any capacity, the only reason I care about any of this is because of ECW.That’s what my friends showed me. I said, Holy crap. What is this? DIY punk rock hardcore kids going to shows? So when I saw ECW I was like, Oh, this is DIY punk rock. This is hardcore. I never even saw it as wrestling. I mean, when you have New Jack jumping off a balcony, like bleeding everywhere while music is playing and the crowd is immersed in the action. I still don’t think it was wrestling. This is a non audio format of punk. So I was instantly drawn to it. So all of those guys hold such a special place in my heart. You know, feuds like RVD versus Jerry Lynn to Jerry versus Super Crazy. So Tajiri…he alone is like… unbelievable. In one of my favorite moments of the pre pandemic year. I think it was 2019 I got to wrestle who I consider my mentor, Ultimate Dragon for Defy in Seattle. Tajiri was also on the card, and he came ringside and took photos. And someone took a photo of him taking a photo of me and Ultimo’s, oh my gosh, 14th or 15th match. And that to me is like, when this is all said and done, that’s the picture I think I’ll frame and hang up and be like, dang, you know, sometimes we lose sight of these things. It’s inspiring. It’s rad. Tajiri’s so cool. He brings this experience with him and this like prestige and name value and whatever you want to attribute to it. It’s an X and like I said, just excitement in general. I mean he’s a legend, a mentor, someone I looked up to… someone I still look up to, and to have him in the mix is great for for all of us. Absolutely.”

On beating MJF at ALL IN and his experience traveling the world: “Oh, man. Ah, it’s a bit of a bombshell. Yeah, I don’t know if I can say everything and nothing at the same time. It’s wild. And what an experience. You know, for me, that was a celebration of independent professional wrestling something, something that I’ve dedicated my, the entirety of my adult life to. I remember laughing about the experience at the time, because a lot of people were like, Finally, to wrestle for a big crowd. And I thought to myself, having done all these giant tours overseas in Italy, and Spain and Australia with the Hulk Hogan tour, you know, I wrestled in Paris, France, for the 72,000 people, it was the biggest wrestling show that year, beating Wrestlemania. So maybe with the exception of Cody Rhodes, I had also done a million of these giant shows. So for me, when some people find that you get this opportunity, I was like, no, no, no, I’m thankful that these other guys get this opportunity. Now, it was insane to do it in America given because I was looking out for the curtain thinking like man in Spain is awesome. Italy is awesome. And there was a disconnect between like, this is Chicago, like, this is a W like this is freelance, like, what? And I felt like everyone that was there that day, they cast a vote, like by buying a ticket, they had cast a vote, they’re like, We want change. So for me, someone who has fought for that for 22 years now, what an experience, and I was like, This is great. I was the first match on the first season of Lucha Underground. I was the first match on season two of which undergrad, I was a part of wrestling society X, I’m the first match at all in these are mistakes. These aren’t coincidences, you have to put someone who is comfortable in that position in that position to set the tone. And that’s what they did. trusting me with someone who was new as a veteran, and I really embraced that role that day. And what an incredible experience, you know, I remember mgf being so exciting, excited, because there was some murmurs of this might be something else. Now I might be a little older, a little more jaded. I’ve been promised, you know, the moon every single six months, for 22 years. So I was like, look, let’s treat this for what it is. It will be one incredible day. And it was I stayed awake that entire night. My flight was eight in the morning, the next morning. I didn’t go to sleep because I didn’t want I knew when I woke up. It was a new day and that experience that sort of ended to some degree and I was like, I don’t want this to end this. This is such a victory for what I had fought for for so long. And yeah, it was absolutely incredible.”

On his experience traveling the world: “Hopefully, I can, you know, sort of circle back to that or capitalize on that at some point. It is ironic or funny that it you know, it’s more or less hasn’t been addressed? And I do, you know, like you said, Hold a clean victory over one of their homegrown stars who, you know, in large part got his, you know, start through me. And I certainly have a lot more to offer and no one brings that global perspective to wrestling like, like I do, you know, like I had mentioned 29 different countries around the world. So a lot of people know a lot about a little, and they, you know, wrestling is bigger than your city. It’s bigger than your state. It’s bigger than your country. I even look at, you know, my idols and the coolest guys that I’ve met, and it’s like the Stone Cold Steve Austin’s, and I’m like, does he know anything about main eventing in Moscow? I think back to toughen up, and I think back to build him, and I’m like, What does he know about wrestling in Colombia, and not to say that these guys are insanely knowledgeable, and we shouldn’t look up to them. But there’s something to be said, we were well aware that every scene at every place is different. So they know a lot, about a little. They’re there in these bubbles without even knowing it. And I’m bringing in the South American perspective, I’m bringing in the Russian perspective, I’ve been to the majority, if not all of Europe, it’s I’ve been to Africa multiple times, it’s even when you say 29 countries, it doesn’t even start to do what I’ve done justice. Because I’ve been to all of those countries multiple times, it takes somewhere like Switzerland, I’ve been there six times. So even saying I’ve been taught to 29 Different countries doesn’t shed light on really what I’ve done and people Sure, there isn’t even a context to understand it. Because no one’s more or less ever done it except for maybe like, traveling NWA champions in the 70s or something. But we’re so far removed from that fans don’t even understand what I’m doing. It’s like Lucha Underground, it’s gonna be 10 to 15 years, if I’m lucky, when someone is able to sort of look at the whole picture and be like, holy crap. Like, that is the last pioneer. That’s the last Trailblazer like he’s living breathing and doing it right now. So yeah, we’re in the thick of it. I just had 16 flights in 16 days. I got back from Alaska two days ago. That’s my second time to Alaska this year. I you know, just it’s, it’s, it’s genuinely insane. And there isn’t even a context to understand it.”

Check out the complete interview below, or at YouTube.com. H/T to Wrestling Headlines for transcribing the above quotes.