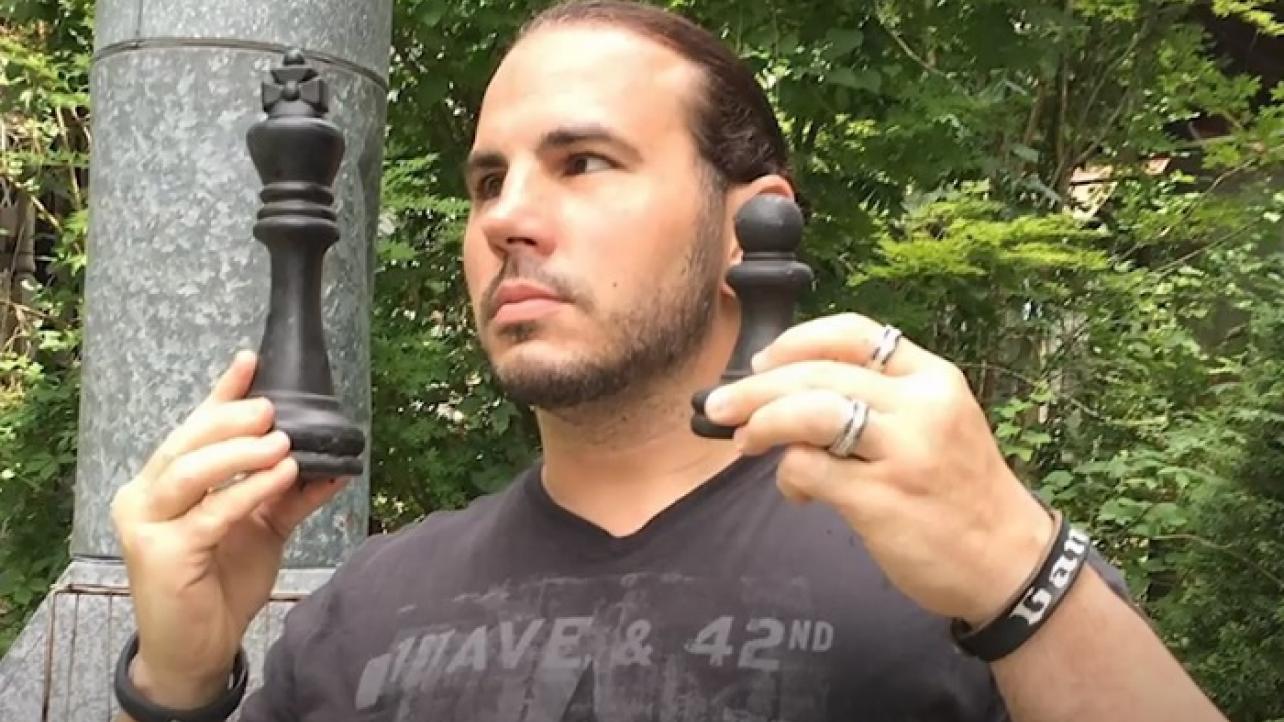 Could Matt Hardy still remain under the WWE umbrella, but as part of NXT? The author of “Broken Brilliance” has many questioning this after revealing a recent meeting he took with Triple H regarding a potential move from the WWE main roster to WWE’s black-and-gold brand in a new interview this weekend.

Matt Hardy is the talk of the town after WWE confirmed his release recently, as everyone wants to know where the 45-year-old pro wrestling legend will turn up next. During a recent interview with Justin Barrasso of Sports Illustrated, Hardy shed some more light on the subject.

Featured below are some of the highlights from the new SI interview with Matt Hardy.

On wanting to work a program with Kenny Omega: “I have a few great wrestling matches left in me, and I feel like one of those is with Kenny Omega. I’d love to have a one-on-one match with him. Hopefully that will happen down the road.”

On promising to make a decision about his wrestling future in the next 30 days and also how he likes to surprise fans: “My goal is to legitimately surprise people and draw emotion from them. I always want to entertain the audience and keep them guessing. I’ll make a decision within the next 30 days, and it could be by next week. It all depends on how everything comes together.”

On talking with AEW and his relationship with The Young Bucks: “I am speaking with AEW, and I am very close with the Young Bucks. We’ve been great friends for a long time. They understand this business and know how to break the fourth wall and have fun with all of this. They really are special.”

On talking with IMPACT Wrestling, NWA and meeting with Triple H about a potential move to NXT: “I’ve also spoken with Impact and I spoke with the NWA. I had great conversations just this week with Triple H about NXT. I’m not sure where I’m going to go. From a character perspective, I want to go to an Arcadia. That’s where I can take the second coming of ‘Broken Matt’ and build upon it. I need a canvas where I can paint and collaborate.”

On being happy that he got to return to WWE and leave on good terms this time: “I gave WWE everything I had to offer. Winning the tag team titles with my brother Jeff was our redemption story. I had hated the way I left WWE in 2010, I was in such a bad place in life. I’d fell into a dark place and I was relying on pain medication to perform. It affected me mentally and spiritually. I always wanted go back to WWE and do a version of ‘Broken’ Matt Hardy there, and Vince allowed me to do that with ‘Woken’ Matt. I’ll always be appreciative of that.”

On realizing that he needs to be his own driving force behind the “Woken” / “Broken” character over time in WWE: “Vince didn’t understand the whole idea behind the ‘Broken’ persona.This is a supernatural character, but one that also broke the fourth wall and winked at the fans. I don’t think Vince fully comprehended th at. But there were a lot of highlights, and having a cinematic fight against Bray Wyatt was a definitely one. People thought that would never, ever happen, but that happened on Raw. And we got the viewership above three million for the final hour, and our WrestleMania 33 return was a career highlight. It was a legitimate surprise, which is rare in this day and age. We achieved that moment and got back in the mix again due to my creation of The Broken Universe and Jeff’s commitment to being Brother Nero. The ‘Broken’ Hardys brought us back to WWE and to WrestleMania, and hearing the response from the fans was so flattering. Our creation left the TNA Wrestling Universe and bled over to the WWE Universe.”

On the importance of surprising the wrestling audience: “I’m a wrestling fan, and when I’m watching, I love to be surprised. That’s the beauty of this industry. And as a performer, if you can do that in 2020, that’s when you truly master your craft. That’s what I’m working to do. If you’re with WWE, you’re with WWE. Triple H is very much a part of the pulse of the modern fan. I’m a big fan of what he’s done with NXT, and Triple H really gets and understands wrestling fans. His vision is incredible. But there is also the possibility of working for a couple companies.”

On promising a thrilling conclusion to his “Free The Delete” series: “I’ll either be a terrible ‘Broken’ version of an abomination, or I’ll be the second coming of ‘Broken’ Matt. From there, it will certainly evolve, and it will be the launching pad of what I do next.”

Check out the complete Matt Hardy interview at SI.com.

Things just got even more confusing!#MattHardy reveals recent meeting with “The Godfather Of #NXT” #TripleH about a potential move to #WWE‘s #NXT brand + Confirms he has talked to #NWA & #IMPACT and addresses #AEW rumors in NEW interview!