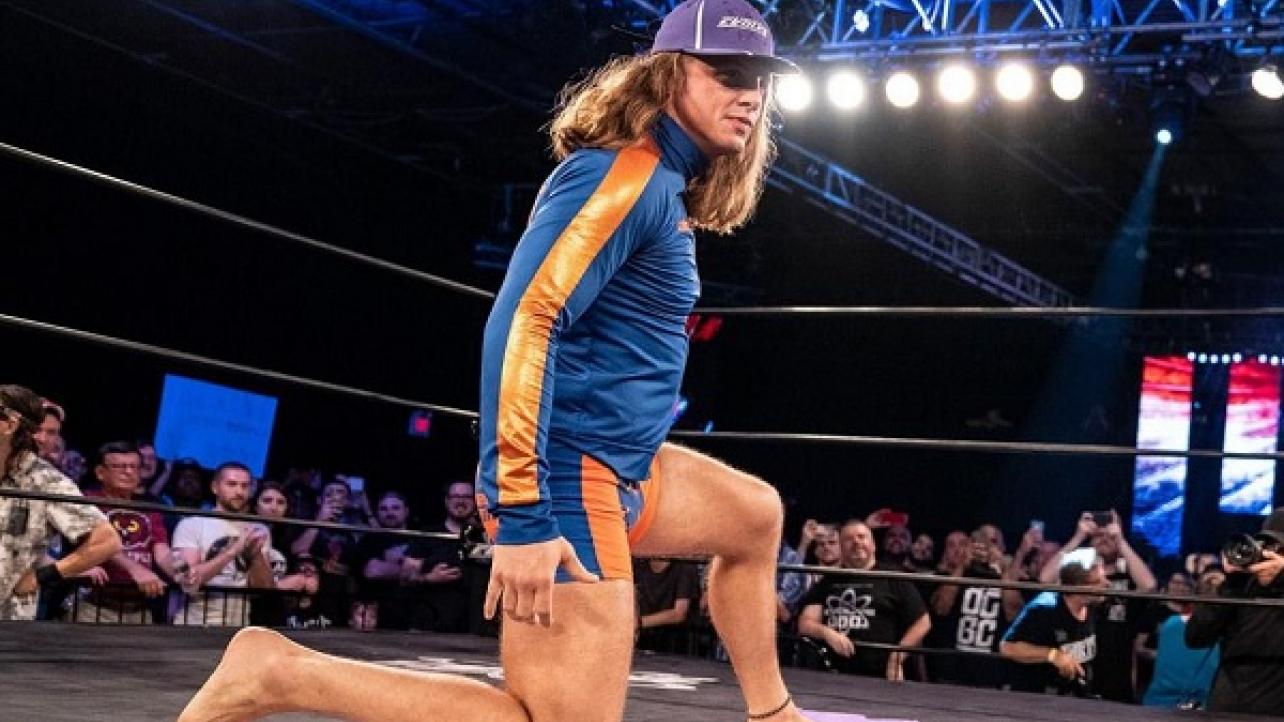 The opponents for Matt Riddle’s matches at EVOLVE 133 on August 24th and EVOLVE 134 on August 25th have been revealed.

WWE announced this week that the NXT Superstar and former UFC fighter will be squaring off against Josh Briggs at the 8/24 show in Livonia, Michigan, and will team up with Curt Stallion to challenge AR Fox and Leon Ruff for the EVOLVE Tag-Team Championships at the 8/25 show in Chicago, Illinois.

After triumphing against Drew Gulak in an incredible battle at EVOLVE’s 10th Anniversary Special, NXT Superstar Matt Riddle is set to grace the EVOLVE ring again at two events in August.

The Original Bro will face the monstrous Josh Briggs for the first time ever at EVOLVE 133 on Saturday, Aug. 24, in Livonia, Mich. The next night, at EVOLVE 134 in Chicago, Riddle will team with Curt Stallion to challenge EVOLVE Tag Team Champions AR Fox & Leon Ruff for the titles.

Briggs, Stallion, Fox and Ruff were among the up-and-coming wrestlers who left the WWE Universe breathless at EVOLVE’s historic 10-year anniversary, which is available on demand on the award-winning WWE Network.

Both of Riddle’s upcoming matches hold special significance in EVOLVE, even beyond the championship stakes of the tag team showdown.

Johnny Gargano, once a stalwart in EVOLVE, passed the torch to Briggs at EVOLVE 132, the night after the company’s milestone anniversary. He told the big man to get focused on the EVOLVE Championship, currently held by Austin Theory. Gargano offered similar advice to Riddle at EVOLVE 69, on Johnny Wrestling’s final night with the company, and The Original Bro eventually went on to capture the EVOLVE Title. Can Briggs follow in those same footsteps? Only time will tell, but first, he must prepare for his clash with Riddle in Livonia.

Stallion, meanwhile, landed on the EVOLVE roster based on Riddle’s recommendation to EVOLVE management. Although Stallion has proven his mettle on his own, becoming one of the company’s most popular wrestlers, he remains close friends with Riddle to this day. Stallion was in Riddle’s corner at the 10th Anniversary Special, and at EVOLVE 132, The Original Bro topped Stallion in an electrifying one-on-one match. Will the two friends be able to unseat Fox & Ruff as champions?

Riddle won’t be the only NXT Superstar in the house that weekend, either. He and former NXT Champion Tommaso Ciampa will be available for meet-and-greets at both events. NXT’s Arturo Ruas and Babatunde will also be in action both nights, as will EVOLVE Champion Austin Theory, former WWN Champion JD Drake, Anthony Henry, The Unwanted’s Joe Gacy & Sean Maluta, “Retro” Anthony Greene (with Brandi Lauren), Shotzi Blackheart, Stephen Wolf, Adrian Alanis & Liam Grey of The Skulk, Brandon Taggart, Anthony Gutierrez and many more.

Tickets for EVOLVE 133 and 134 are available now. For more details, head to WWNLive.com.