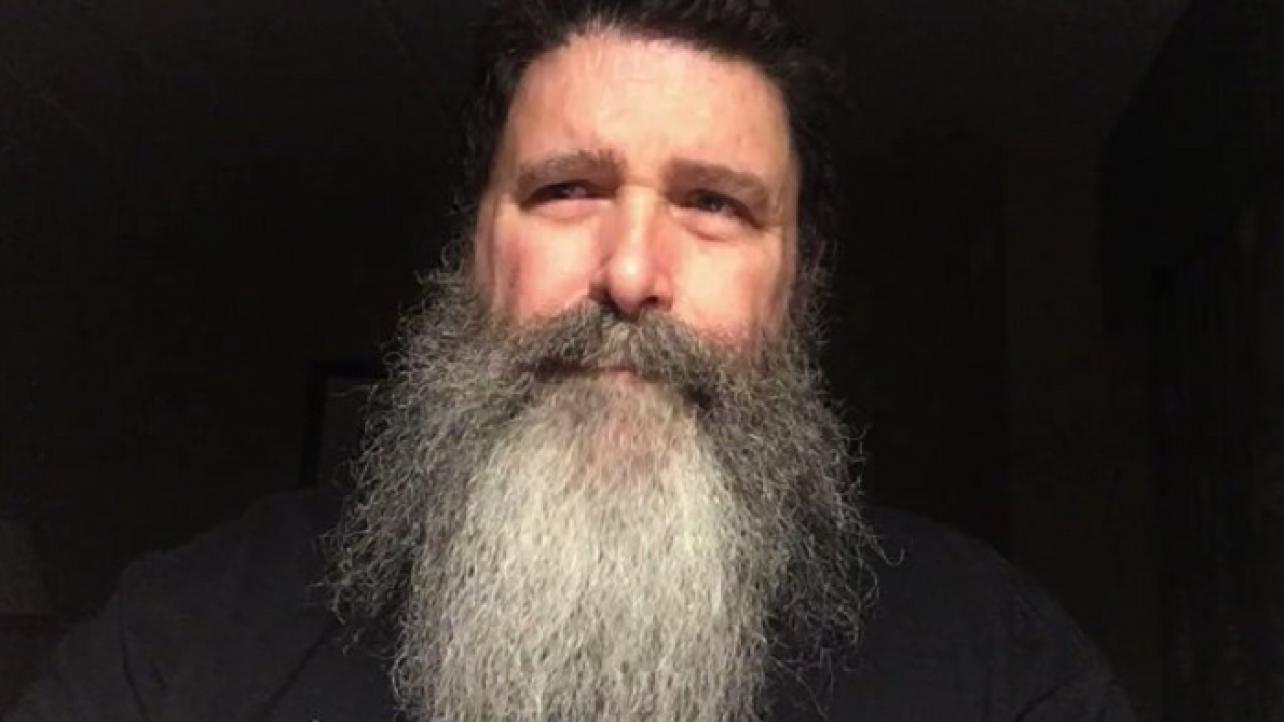 Mick Foley recently appeared as a guest on Busted Open Radio for an in-depth interview covering all things pro wrestling.

On his previous comments about WWE having an issue with top talent leaving to AEW: “When I’m on the tour, the second half of the show is a Q&A session, and I welcome every question. And the first question three nights ago was ‘what do I think about AEW?’ And that’s where I ended up saying, I used the phrase ‘I think WWE has a problem because they are no longer the place that talent aspires to go.’ Once I talked about that I said ‘uh oh.’ There’s usually one question every couple of nights that the wrestling media will catch on to. I was like ‘well they’re going to pick up on this.’ And I thought ‘as long as they’re going to pick up on this, they might as well hear from me because it’s been something I’ve been thinking about anyway.’ So I did that 75-second video. And it really struck a chord with people because I believe it was on a lot of people’s minds anyway. I think it’s something WWE needed to hear. I used Karrion Kross as an example, as someone whose main roster debut was about 1/8 as electrifying as his NXT debut. That’s an issue. And then when you go from watering down a character to embarrassing it, I think that sends a bad signal to everyone who is in developmental, and everyone who has a choice to make. A very real choice to make. Theoretically NXT is its own show, and I think for a long time their shows have stood out and been amazing on their own. But on paper, they’re a developmental group. So they would be like a feeder system. And if a guy is hitting .360 and driving in runs and hitting home runs in minor league baseball, it should be a given that he will be given that same opportunity with the big league. But I’m thinking if I’m Adam Cole, and I’m looking at what just happened with the guys who made their debuts – not just Karrion Kross, but even going back to a talented guy like EC3, who could’ve been a major player and was made a joke to some extent – I would seriously have to consider whether or not WWE was the place where my dreams were going to come true. Adam probably looked at his size relative to the type of people that Vince likes on the main roster. I don’t think it hurt at all that his girlfriend, Britt Baker, was in AEW and he made the choice that he thought was right for him. When you put all these things together and you see that people are now departing what they see for greener pastures, that’s a problem for WWE.”

On Ruby Soho being misused in WWE, and how WWE doesn’t do well with original characters: “I thought Ruby stood out. I thought she was excellent in WWE. She had a nice run there. I don’t think they got everything they could’ve out of here, and that’s why when she left I tweeted out ‘I don’t think we’ve seen the best of her’ or ‘the best is yet to come.’ And I think it is. I think one of the things you risk when you have a developmental system and a way of doing things specific to your business model is that you lose a bit of individuality. And so you tend to have a lot of people who can do great moves, have very good matches, whose names you can’t remember after they’ve wrestled unless you’re tuning in every week. That was the problem with me. I would tune in sporadically and go ‘whoa, look at that guy. Good shape, looks great, handsome guy, wearing trunks, great moves. Can’t remember his name. A lot of guys tend to fall into the same pattern of looking and wrestling the same. So when you have someone like Ruby, who is very original and brash in the ring, I think you tend to lose a little bit of that. WWE used to be the place where characters came to life, and now I think it’s a place that….obviously, that’s not the case all the time because you have breakthrough characters – guys like Bray Wyatt who is no longer there. There is still some great storytelling. I look at that Smackdown roster and it’s just stacked from top to bottom. The stuff Roman Reigns is doing with Paul Heyman as that ultra subservient second is really great stuff. But there’s only so many spots on the card. And that’s an issue AEW is going to have to address. Not address but they’re going to have to deal with because there’s a lot of talent in one promotion there as well. It’s a good problem to have if you’re a wrestling fan or a wrestler.”

On Vince McMahon’s approach, saying he’s wise but also “prone to whim:” “Vince is one of the wisest men I’ve ever met, but he’s prone to whim. One day you’ll hear ‘I don’t want long hair anymore.’ Then you’ve got a roster almost full of guys with short hair, which makes it much tougher to sell. ‘I want to see trunks!’ So now everybody’s got trunks. ‘Dammit, if somebody is punching you, put your arms up and protect yourself!’ So now every single person, as soon as punches come, they’ve got to hold both their arms up. That’s not the way everyone defends themselves, first of all. There’s got to be a different way. I certainly sold punches in a different way than guys on the roster do. But when you’re seeing the same reactions up and down the card because people have been given an ultimatum down the line, I just think it hurts the individuality of the product. And then when you get a guy like Adam Cole, who’s really found a groove who’s been, to me, the NXT MVP, and he has a decision to make and decides WWE’s not the place where his dreams are likely to come true. Again, going back to the theme of ‘WWE, we’ve got a problem’, we do have a problem.”