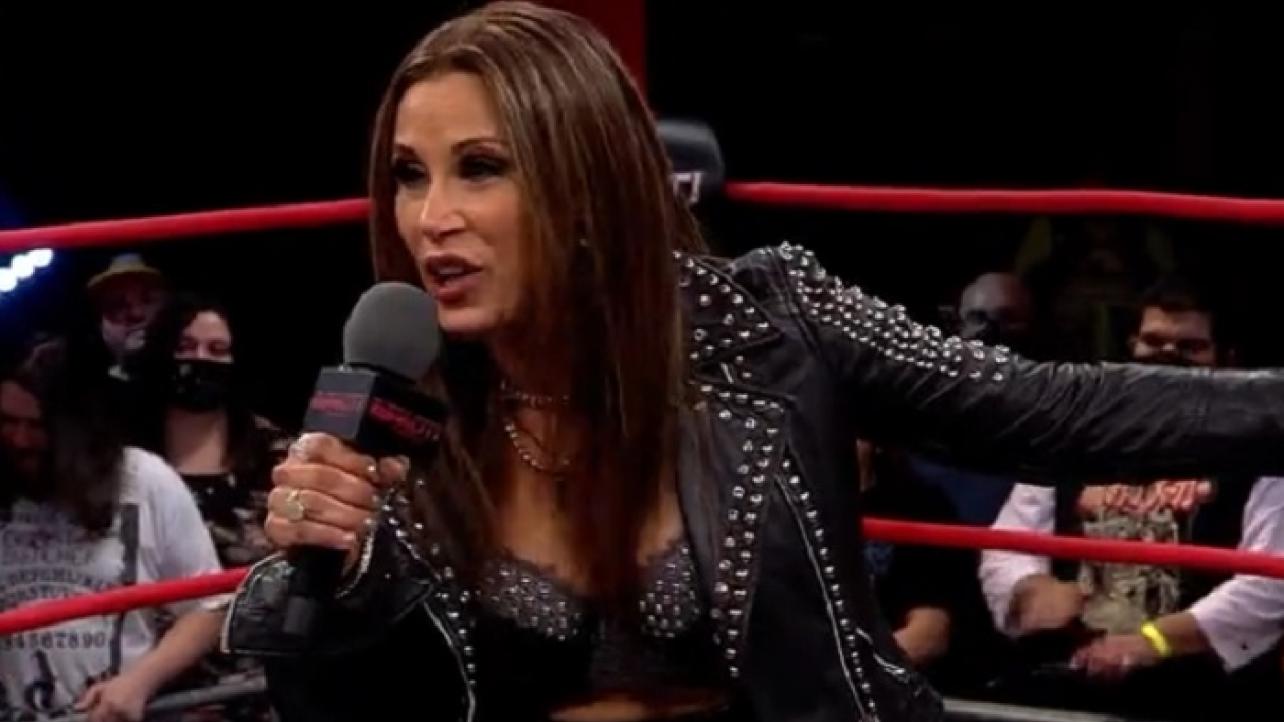 Mickie James recently appeared as a guest on Busted Open Radio for an in-depth interview covering all things pro wrestling.

During her appearance on the popular pro wrestling program, the women’s wrestling legend spoke about whether or not she felt the need to go back to IMPACT Wrestling after her WWE release and more.

On whether she felt like she had to go back to IMPACT after her WWE release: “Yes and no. I mean obviously I’m doing some really great stuff at NWA as well. Someone sent something to me where it was 19 years ago when I was first at Impact, and you see me with the hands in the air. It’s very much Mickie James’ face, but it’s the stuff with Raven and The Flock at the time. But obviously I went to WWE and that was my dream to go there. And I was able to have an illustrious career that first run and do some really good things. My first run was awesome. Even the second run (was), but I feel like this last run was not what I guess I expected or hoped for. Maybe it’s because I didn’t fight enough for it, but I hoped that I did enough for everybody else I’d at least get that love. And I didn’t, and that’s okay because kudos to Impact. It was cool they would welcome me back, it was cool that I was given the platform to put together EmPowerrr at NWA. Here I thought ‘I’m going to have this amazing run. I’m so excited to go back to WWE. I’m going to have this amazing run, work with these awesome new girls, get in front of this new audience, and probably retire back home.’ That’s what I felt. ‘I’m going to retire there in a very cool way.’ And it did not happen that way, because for whatever reason it just didn’t happen that way. And I left and it was so disheartening and I was broken hearted. So then to be able to leave and do so much more powerful stuff, that actually is stronger work. It’s more powerful work, because it’s laying that foundation behind the scenes of setting up for the future and different levels for the women.”

On how IMPACT reminded her about how talented she is: “To then be able to go back to Impact and get the love from the fans and to hear ‘Hardcore Country again’, which I really wanted to do. The fans, they love that song. They love that song. I was going to do Grown Ass Woman. I was like ‘maybe I’ll do ‘Grown Ass Woman’ or maybe do a new song.’ I’m like ‘no, they love ‘Hardcore Country.’ And it’s cool.’ And then to have a shot at the championship and be treated like ‘you deserve to be champion and you deserve to be because you’re a bad ass.’ We forget because we’re so humbled. We’re told to be humbled for so long that we’re humbled. So we don’t always see it. We don’t always see what other people see, because we’re still trying to prove something. We’re always trying to prove ourselves or comparing ourselves or whatever the case may be. And we forget sometimes, and it’s nice to be gently reminded again. And they (Impact) have done a lot of that for me, and NWA’s done a lot of that for me. So I’m really grateful sitting on the other side now. When it first happened I was very upset. But now, sitting here in this seat with the shiny new championship, it’s a whole new version of the Impact Knockout’s World Championship? It wasn’t something I had in mind, but I’m not going to turn down a chance to do that again. Plus I can round it up and I finally made double digits (title reigns)!”