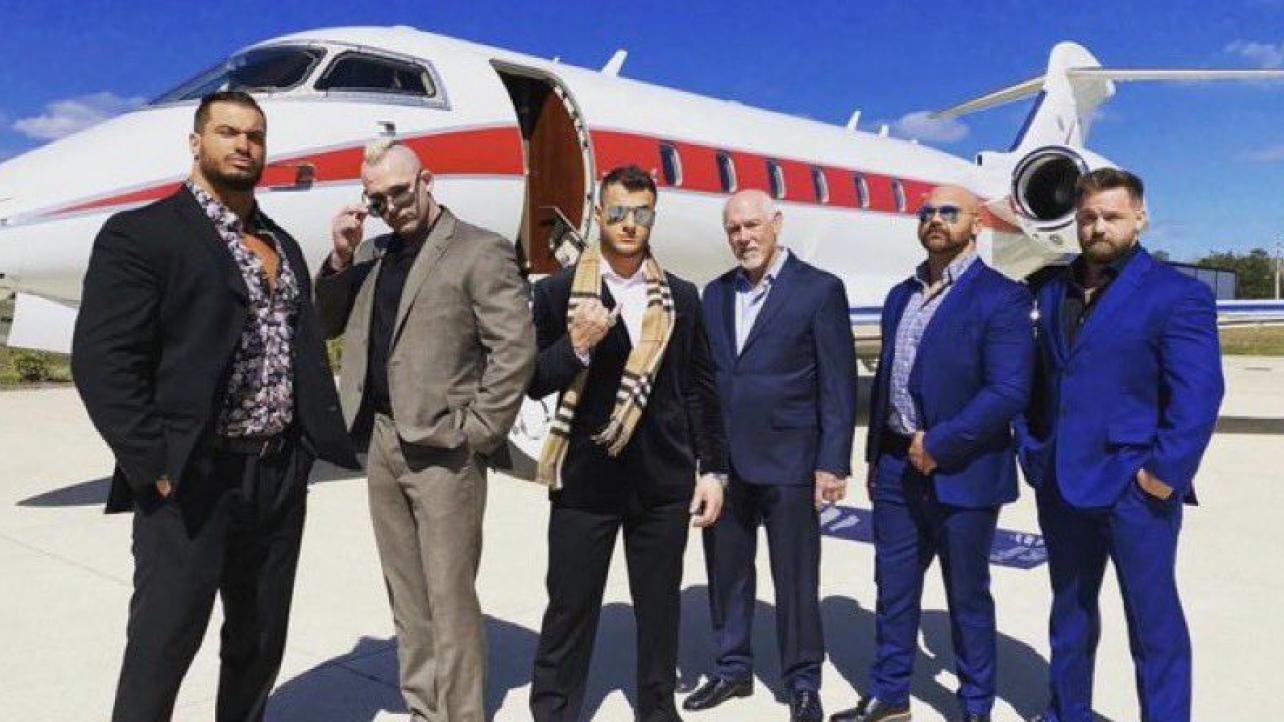 During his recent interview with Inside the Ropes, AEW star MJF mentioned that he believes Dr. Britt Baker DMD could be a member of his faction, The Pinnacle. Check out MJF’s comments.

On competing in Blood and Guts, followed by Stadium Stampede:

“I think it made sense for this feud. It’s definitely the most… It’s the biggest, the most talked about feud, let’s be honest, in AEW right now. And it makes sense because there’s so many massive stars involved in the feud, mainly me, let’s be honest again. But I think it worked for us to go out guns a-blazing right away because, let’s face it, there’s genuine hatred or, as you fans like to use insider terms, “heat” there. Spears and Sammy really don’t like each other. Spears hates the fact that a guy that young was able to take a spotlight that Spears felt he should have had 19 years ago and was never afforded the opportunity to… Dax and Cash, Proud and Powerful – they legitimately don’t like each other. Kind of hard to have an even keel and be grounded with one another when you were both raised on completely different sides of American culture. And Chris Jericho and MJF, obviously, you know, at first we got along, but I think it kind of stuck in Chris Jericho’s craw that he’s playing second fiddle to a 25-year-old. Am I shocked by it? Absolutely not, because I’m a prodigy and I’ve been this great since day one. Am I shocked that people are already calling me the number one villain in pro wrestling? Yes, because I think I’m salt of the Earth. Outside of that, no, I thought it made complete sense for us to start off our quote unquote, “feud”, if you will, at Blood and Guts, because there’s a lot of hatred there and you’re going to see just as much hatred and violence at Stadium Stampede.”

On the now infamous spot with Chris Jericho at Blood and Guts:

“So for me personally, to me, let’s talk about it from a symbolism standpoint. Here is this 25-year-old guy that everybody’s saying is not just the future, but is the present. Here is, at that point, someone who will go down as the greatest ever in Chris Jericho. We’re on the top of the cage, a la the top of the mountain in professional wrestling, and I shoved him off of that and the last thing you saw was me standing on top of that cage and sucking it all in. Every single boo, every single tear. That’s what the end of Blood and Guts was all about. The unfortunate thing was I didn’t shove Chris hard enough. I think if I did, maybe he wouldn’t have shown up the following week. I do know he legitimately really messed up his arm, which put a smile on my face. He was also about four inches away from a metal railing on our stage that definitely would have killed him. Unfortunately, he missed that railing. It is what it is. But in that moment, what that represented was – I’m the king of pro wrestling now, I’m the GOAT, I’m the guy who’s going to be leading the charge in the industry for the next 25 years. And while, of course, there were people talking about “production” – which is laughable to me. None of you guys know what you’re talking about, but it’s fine. There were also people, when they were done talking about the bulls***, going, “OK, yeah, I can’t play mental gymnastics anymore and pretend that MJF isn’t the guy.” It’s impossible. We’re way past that point now, and I’m proud of that.”

On The Pinnacle possibly adding a female:

“Britt Baker. Me and Britt have actually formed a bit of a bond. I still think she’s a total bitch and she definitely thinks I’m a s***head, but talent recognises talent. Real recognizes real. Do I think we’re going to add a female in The Pinnacle? Probably not. I think, right now, we are easily the most dominant faction, group, however you want to put it, in professional wrestling. We’re in the most intense and intriguing angle… And then when we’re done with the Inner Circle, after we make them disband this Sunday, all we’re going to focus on is gold. Now, after we win all the gold, will there perhaps be a conversation where we’re going, “Well, there’s only one title left”? Then would it possibly make sense for me to pull Brittany Baker over to the side and just have a conversation? Maybe. Right now doesn’t make sense, but I’m very much so looking forward to seeing Britt Baker become the new AEW Women’s Champion.”