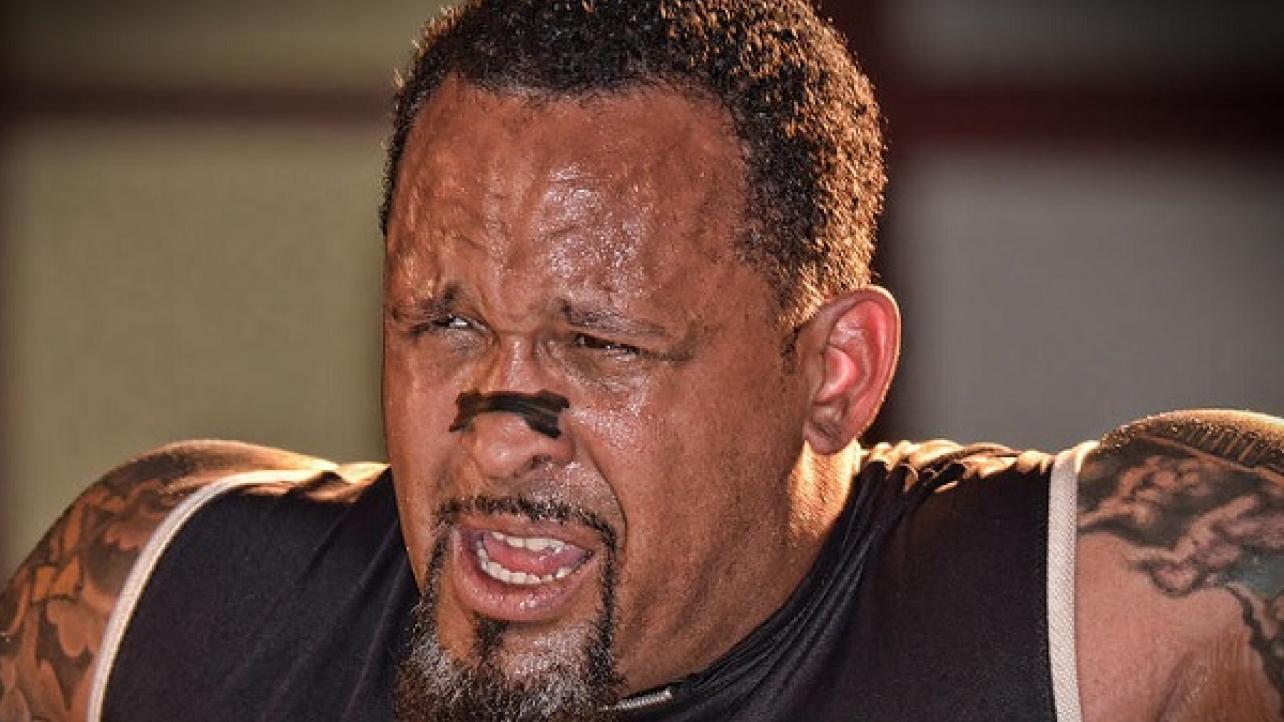 MVP On Origins Of His Character, Kenny Omega’s Chances In WWE & More

MVP recently appeared as a guest on Robbie E.’s Why It Ended podcast for an in-depth interview. Featured below are some of the highlights.

On working with John Laurinaitis behind-the-scenes: “I used to get booked as an extra for the WWE when they were coming to town”, said MVP. “And I remember roping Johnny Ace off one day and I’m like , ‘Hey Johnny, you got a minute? You got a minute?’ He said, ‘I’m busy kid.’ I said, ‘Johnny please, just one minute… just thirty seconds.’ ‘Busy kid.’ ‘Johnny give me 10 seconds.’ And he stops and goes, ‘Alright kid. What?’ ‘Just tell me what the f**k I got to do to get hired.’ I said it just like that. Johnny told me. He paused for a minute and looked at me like, ‘Do you know who the f**k I am, talking to me like that?’ The other part was he was kind of like, ‘This kid’s got some f**king balls alright.’ So he said, ‘Look, we like you. We just don’t have anything for you’.

“Here’s a little trivia, a little piece of information that I’ll drop on your podcast that most people don’t know. Way before that, Carlito’s bodyguard that he used to have… Carlito had a bodyguard for a little while and he got hurt, his neck got messed up. So they were talking about bringing me in to be his bodyguard. I remember for the first time being excited, because I talked to Ann from travel and they’re flying me in. I’m getting looked at. This is it, right? I was chilling with this chick, and things are about to get nice. We’re having a nice little intimate moment. It’s all good. Things are about to go down if you will, and my phone rings and I see it’s that unknown number.

“I’m like, ‘Oh s**t, I’m waiting for a call from them.’ It’s Tommy Dreamer and he says, ‘Hello Antonio Banks, creative has changed their mind. They’re going in a different direction, so we’re not going to be flying you in next week, but we’ll see you when you come down in February. Take care. Give me a call if you need anything. Bye’. Dude, you want to talk about a heartbreak let down? I’ll tell you what, I bulls**t you not. I looked at that chick, I got up, I walked out. She said, ‘What’s wrong?’ I said, ‘I just got some really bad news.’ As I walked to the car I was thinking, ‘You bad luck fu**ing b***h, I’m never going to talk to you again.’ I never saw that girl again, never called her, never spoke to her.”

On coming up with the idea for his MVP character: “Working down on South Beach, I came up with this idea. Hey man, very week you turn on SportsCenter, there’s some pro athlete saying or doing some stupid s**t or getting into a scuffle or getting suspended. Working down on South Beach I used to see these athletes show up and I’d see guys like Shaq, Dr. J, Jim Brown, Barry Sanders. Here are guys who are first ballot Hall of Famers, like legends. They’d be so cool and so humble and they’d stop to speak to you. They just conducted themselves differently. But then you see guys who are first round draft busts, guys second-third round in the draft or whatever. They’d show up with an entourage of fifteen people. We’ve got a dress code, but they’d show up with their shorts and sneakers just demanding s**t and go, ‘Hey man, do you know who I am? You better let me in.’ ‘Man, f**k you man. You haven’t scored a touchdown since you got drafted. F**k off.’ But, it triggered a light bulb and I realized, ‘Wait! That hasn’t been done in wrestling yet!’

“So I came up with this idea to take everything bad about Deion Sanders and Ocho Cinco and Terrell Owens and Rod Tidwell and Allen Iverson, everything you could think of bad and apply it to a pro wrestler who comes into pro wrestling with a big ego, but a lot of ability. Whether or not that ability pans out depends on whether or not he showed up to play, and put together this big treatment with promos, because when I came up with the idea, I had a mutual friend, Ricky Santana who’s friends with Johnny Ace. And I told him about my idea but I was scared that they were going to steal it from me. And he said, ‘Let me talk to Johnny’. He talked to Johnny and he said, ‘I gave you my word I’m not going to steal you s**t’. Johnny called me, I gave him the rundown of the MVP character. He said, ‘Put it on paper so I could show it to creative’. He said, ‘Just give me twenty storylines and vignettes’, and I said alright. I basically gave them a step-by-step treatment of the MVP character.”

On Kenny Omega’s chances of making it big in WWE had he stuck around after signing a developmental contract in the past: “Regarding Omega, I think definitely with the way the developmental system was at the time – the way Bill was running it and sadly Vince McMahon’s mentality at that time – I don’t think Kenny would have thrived in the WWE arena because I remember specifically hearing when Vince was like, ‘If he’s under six feet tall and 200 pounds I don’t want to see him.’ There was that time when no little guys were getting signed because Vince wanted big guys. And six feet 200 pounds was the cut off.”

Check out the complete MVP interview from Robbie E.’s “Why It Ended” podcast below.

MVP On Origins Of His Character, Kenny Omega’s Chances In WWE & More