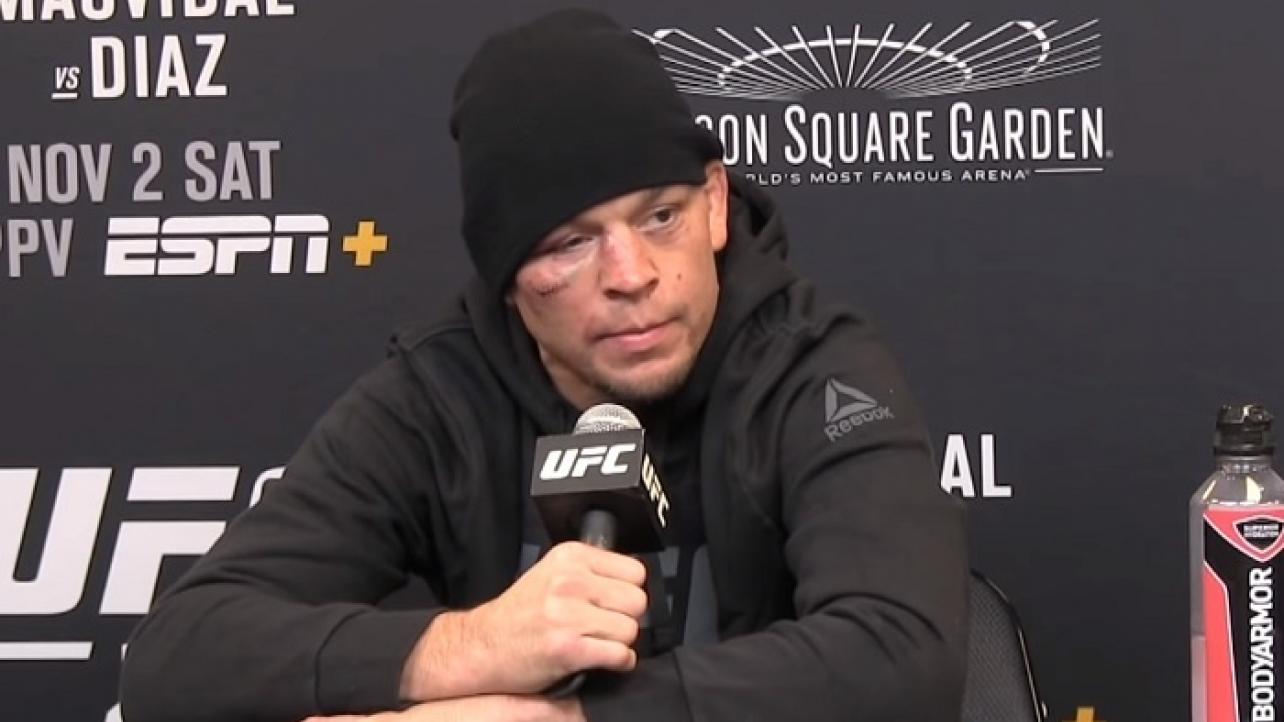 Nate Diaz is none-too-pleased with the king of Hollywood, Dwayne “The Rock” Johnson, following Saturday night’s “BMF Title” fight with Jorge Masvidal in the main event of UFC 244.

Dwayne “The Rock” Johnson apparently pissed off a “West Coast Gangster” by the name of Nate Diaz due to not-so-subtly siding with his fellow Miami-based superstar “Gamebred” Jorge Masvidal in the UFC 244 “BMF” title fight at Madison Square Garden in New York City on Saturday night.

After the fight, which Diaz lost via TKO by way of doctor stoppage due to bad cuts above and below his right eye (Photos Here), the Stockton, California native addressed the WWE legend siding with his opponent this weekend.

“Fuck The Rock, too,” Diaz said at the UFC 244 post-fight press conference (See Below). “Man, that motha fucker over here playin’ me.”

Diaz continued, bringing up the fact that The Rock seemed to be on the side of his fellow Miami, Florida native, Jorge Masvidal, in the “Bad Mother F*cker” title fight.

“I see him over there smiling with [Jorge] Masvidal,” Diaz added. “[We] should’ve had Mike Tyson hand out a [BMF] belt if anybody. I didn’t give a fuck about no belt, anyway, but he could get it, too.”

For more details on The Rock’s involvement in the BMF Title fight between Masvidal and Diaz at UFC 244 on Saturday night, including photos of him putting the belt around Masvidal’s waist after the fight, click here.

Uht, oh … #WWE legend @TheRock has apparently pissed off a “West Coast Gangster” from #Stockton, CA., as @NateDiaz209 says, “F*ck #TheRock, too. He could get it, too!” for siding w/ fellow #Miami native @GamebredFighter in #UFC244 #BMF Fight~!#VIDEO: https://t.co/AZvXkA6KOd pic.twitter.com/BFNEviTcNp